“Will we have enough usable water?” 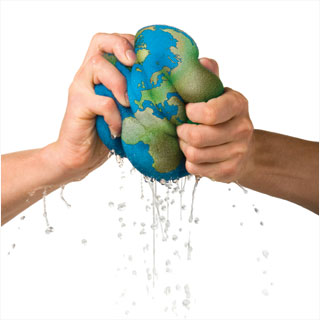 “Will we have enough usable water?”

The question that titles chapter 13 of the AP Environmental Science textbook seems like it has an obvious answer. Of course. Of course, we will have enough water. Of course, tomorrow and the day after when a faucet is turned on, water will come out the same way it came out yesterday and the day before that.

Except, according to the United Nations, 790 million people go without water daily.

790 million people, two and a half times the population of the United States, either turn their faucets on and nothing comes out or they don’t even have the faucets to begin with. And these people aren’t just living in third world countries. 1.6 million Americans face a lack of water on a daily basis.

Water shortages are expressed in many ways, taking form in economic shortages, where the economy of a government simply doesn’t have the resources to establish a system of water treatment and pipes to bring water to their citizens, and environmental shortages, where, due to either the geographics of an area or some extreme environmental circumstances, there is a physical lack of water.

No matter the reason for the lack of water, it eventually affects the entirety of the world’s population.

And here it is, the cliche moment; everyone can help alleviate the stress of water shortages — everyone can make a difference.

The average person uses 101 gallons of water a day.

A full bathtub is 36 gallons.

And on it goes.

What this statistic doesn’t even take into effect is that water that goes into growing the food or watering the cattle that a person eats every day.

So where does all this water come from?

There are two ways we get water. It either comes from lakes and rivers or it comes from groundwater. The majority of drinking water actually comes from groundwater as does 64 percent of the water used to grow crops. This groundwater is extracted from large underground reservoirs called aquifers. Aquifers have sustained humanity’s water needs for a millennium; however, these aquifers are becoming depleted as they are being used faster than they can be refilled.

Aquifers are naturally refilled by the water cycle. When it precipitates, some of the water soaks into the ground and eventually finds itself in aquifers. This process, however, is not a fast one and is greatly inhibited by humanity’s coverage of the earth’s surface. Parking lots, roads, and other impermeable surfaces prevent water from making it to the ground and into the aquifers.

The rapid depletion of aquifers causes issues outside of the rising water shortage as well. When an aquifer is depleted too quickly or to too great an extent, the ground above and around the water will begin to sink or subside in a process called subsidence.

A great example of this is the Ogallala Aquifer. The Ogallala Aquifer is the largest aquifer in the world and resides under a large portion of the western United States. In San Joaquin Valley California, an area where much water is pumped from the Ogallala Aquifer, exists the site of an iconic photo that showcases the extreme subsidence occurring in the area.

And with that question, we get to something anyone can do to make a difference.

As a society, we need to begin thinking. In general. But, also about where we grow our food. Growing food in areas where water is readily available takes the stress off of areas where water isn’t meant to exist in extreme abundance. So how does an average American cause a massive shift? By buying foods grown and produced in areas where water is used responsibly and isn’t drawn at the expense of the environment, society will cause a shift in the agricultural industry to more sustainable practices.

But enough about food.

You were expecting me to tell you to take shorter showers, to turn the faucet off when you brush your teeth, and not to flush the toilet when you don’t have to.

I expect you’re already doing all those things

The problems behind water shortages are complex and messy. They involve a plethora of governments, precarious economies, societal norms, but most importantly, the water shortage involves the lives of people in every country.

Water is a necessary resource — something people physically can’t live without. Lives are at stake. So do your part, buy responsibly, turn the faucet off, and respect the drip.