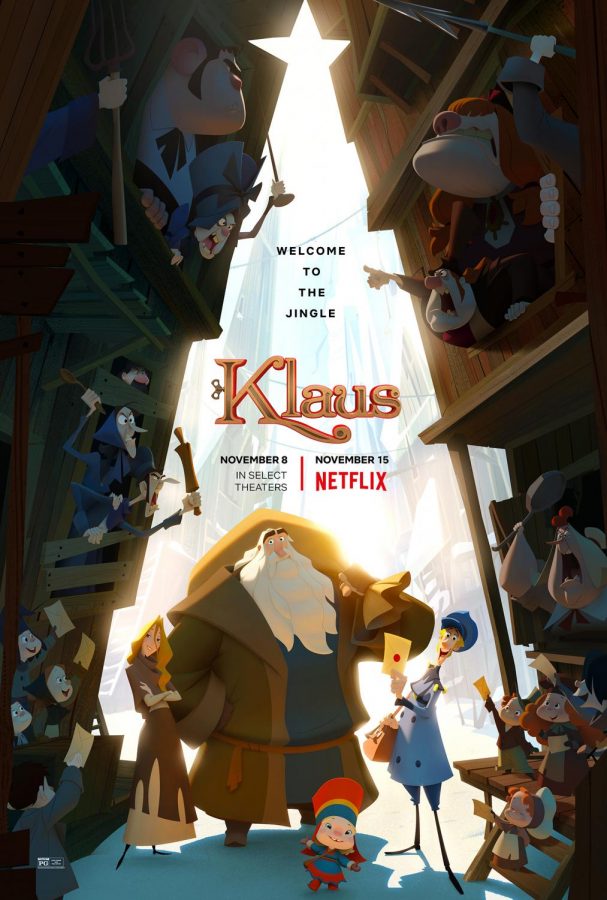 As the Christmas season nears, countless holiday movies trickle into both nearby theaters and onto Netflix. Unfortunately, the majority of these seasonal films result in disapproval and cliches time and time again; however, Netflix’s newest Christmas movie Klaus has indefinitely changed that expectation.

Netflix Originals tend to be placed at the bottom of my must-watch list. They often consist of either a poor storyline or a weak climax; therefore, I don’t usually bother giving them a chance. However, when I came across quite a few satisfied reviews on this film, I pushed my low expectations for Netflix Originals aside. I couldn’t help but give this festive movie a chance.

The movie features a wannabe postman—known as Jesper—who is being forced into proving his accountability to his father. To do so, he is sent off to a town in the depths of the North Pole: Smeerensburg. As his adventure begins, he runs into multiple problems, one of them being that his post-mailing business is completely flopping. Suddenly, though, he comes upon a toymaker by the name of Klaus. From there, an odd but attentive bond is created between the two protagonists.

Despite their differences, they both adore the feeling of bringing joy to Smeerensburg. Both characters are set on the goal of spreading happiness during the holiday season; therefore, they work together to exceed that goal.

Throughout the film, the story provides answers to all of the supposedly unknown questions regarding how the evolution of Christmas has come to be. Each of the specific answers contains individual elements that all add up to the big picture of how and why Christmas traditions today were created. After watching this fictional film, I’m now knowledgeable of how exactly these festive traditions have resulted in the expansion behind what we know as Christmas.

As a pair, Jesper and Klaus face countless obstacles that their nagging opponents impose. Fortunately, Jesper and Klaus try to keep their eyes on the prize. The movie portrays a message that supports the power behind the act of spreading positivity, and because Christmas movies most commonly attract younger viewers, implying this message for youth holds extreme importance.

Regarding the casting, I felt that each actor’s voice truly embodied what character they were playing. For instance, Jason Schwartzman (Jesper) did a phenomenal job of presenting his quirkiness and determination just through simply reciting a script into a microphone. Schwartzman’s voice, in my opinion, fit quite perfectly with Jesper’s opinions and attitude. Whether a specific character’s personality was dark and trembly or joyful and spirited, the entire cast list executed exemplifying their assigned character’s personalities and viewpoints.

All in all, the movie Klaus heartedly portrayed the meaning of seasonal joy and love. It unexpectedly proved my expectations of holiday films wrong. From its character portrayal to its storyline, Klaus is now a holiday classic of mine because of the innocent, cheerful, and inspiring spirit it has enlightened me with.