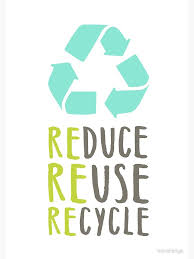 Our society is really talented at teaching these three words to our elementary-aged kids. We’re not so good at following these principles as adults with the power to make a true difference.

Reuse. To use something again. To use water bottles more than once. To thrift clothes. Reuse plastics, containers, resources. Reusable.

Recycle. To take something and make it again, often into something new. Recycle paper. Recycle plastics. Recycle water. Reclaim. Renew.

It’s all laid out in a pretty little triangle for us.

As a society firmly set on a foundation of consumerism, our inputs and outputs of resources are mountainous. To have stuff is to have status—an idea bought by so many which has driven our society to crave more and more. This inability to be satisfied has led to the strenuous exertion of the earth’s natural capital — the resources the earth provides us with.

And greed is playing a massive role in this story as well.

Corporations such as Apple enhance their profits and play on society’s need to have the newest, shiniest products through a process called planned obsolescence. Planned obsolescence is the idea that a product is made to expire. In 2017 Apple faced a class-action lawsuit over the fact that they were slowing down older iPhones through “updates” on the phones and coinciding those updates with the release of the latest iPhone models. This planned “death” of their technology forces consumers to buy the newest models and keeps Apple’s profit on the rise.

Reusing items has become more mainstream in recent years due to DIY projects and teen fashion shifting towards the “quirky” thrifted style. We have reusable containers, reusable water bottles, reusable straws — reusing is easily the part of the triangle we’re best at. But, we still aren’t great.

There exists a stigma when it comes to second-hand things.

Unless something is being reused by choice, our society deems it a mark of a person’s lack of wealth. We don’t just want more stuff, we want the newest stuff.

And why does plastic recycling struggle so much to keep up? The sheer amount of plastic we use daily worldwide is too much for the already poor systems for recycling plastic; they simply can’t handle it. Not only that, but some plastics are too low of quality or too badly contaminated to even make it through the recycling process.

Recycling is important. That fact is undebatable. However, reducing our footprint and reusing to the best of our ability will really protect the planet.