Two seniors who have been on varsity golf since freshman year, held the first and second spot on the varsity team this year, and helped their team qualify and place third at the state meet: Mandy and Ally continued to lead their team throughout the season. These two shot scores under 50 six times throughout the season, and Ally even shot a 38 at the FHC Jamboree. The two seniors managed to the team all the way to the state tournament where they placed third, and in the 18 holes played Mandy shot an 82, and Ally finished with an 83. The varsity golf team ended up second in the OK White conference, and while they were competing in their conference invite the duo managed to shoot one of their best scores of the year with Ally shooting a 76, and Mandy shooting a 78 in 18 holes. “I think we are very competitive, and both want to see each other succeed,” Mandy said. “When one of us has a great day I think that pushes the other to try and be better, and it is just a continuous cycle because we both want to be the best we can possibly be.” 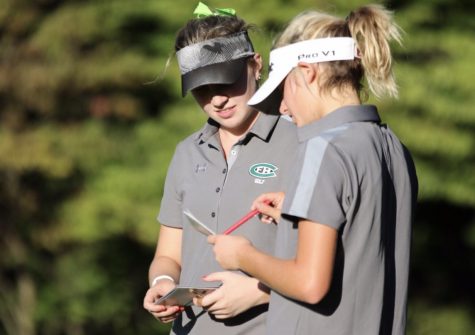 This junior-senior duo cleaned up their competition throughout the season and even advanced all the way to the state semifinals as a doubles pair. Jeremy and Ali played as the Rangers first-doubles pairing, and had multiple successes on their behalf, one of them being their second-place victory at the Rockford Quad after winning two of their three matches. This duo also managed to go undefeated against Byron Center, Grosse Pointe North, and Jenison in their second Quad Invitational of the season, and they were one of the only two Rangers to accomplish this feat. However, one of their biggest accomplishments of the season was their outstanding performance at the Elliot Pierce Invitational. Here the two destroyed their competition and placed first in their flight beating out Troy High School-a very skilled team-for the final win. “I loved playing with Ali this year,” Jeremy said. “With this being his last season, we wanted to make the most out of it, and I definitely think we did that. I am just thankful I got to play a season with one of my best friends as my doubles partner.” 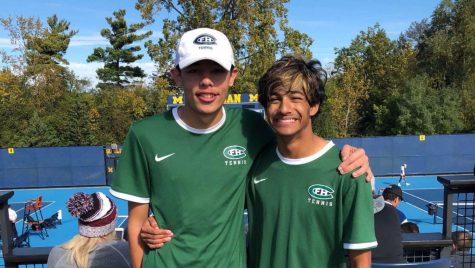 Junior Morghan Tilton and freshman Sarah Dunn made up a hitter-setter duo that dominated throughout the entirety of Ranger varsity volleyball season. Sarah, being a freshman in her first year on varsity, had a massive impact on the serving and hitting aspect of the game. While on the contrary, Morghan who has also been on varsity since freshman year, would set Sarah up for her attacks and kills. An example of this pair working off of each other was in the Portage Central game. Throughout the game, Morghan combined for 14 assists, and Sarah made six attacks off of these. Later on in the season, when the Rangers took on the Forest Hills Northern Huskies in the district semi-finals, Sarah and Morghan had another impressive performance once again. Morghan managed to succeed in creating 20 assists, and Sarah finished with four kills and 12 attacks for the night. “Being able to play on a team with Morghan has helped me to grow as a player on and off the court,” Sarah said. “She encourages me to play to my full potential, and I can always count on her to give me a good set. We aren’t just teammates, but we are also really close friends which has definitely helped us work together on the court.” 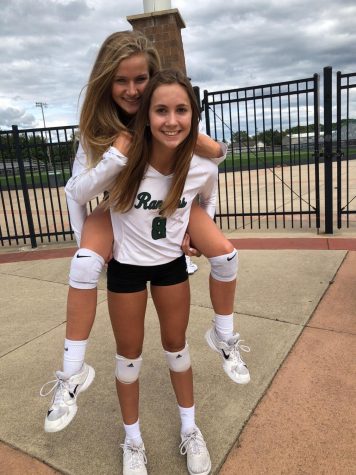 A defensive-end pair that made it nearly impossible for the opposing team to sustain any sort of rushing attack, seniors Brandon Weiskoph and Sam Vanderjeit helped to lead the defensive line throughout the entire season. These boys completed the starting defensive line for the Rangers varsity football team throughout the entire season and made a significant impact when it came to the Ranger’s final record of 8-3. Their ability to stop the opposing offense from getting through the line of defense was evident, especially in the Rangers game against Northview when they allowed the Wildcats no points throughout the duration of the game. In seven other games during the season Brandon and Sam helped to keep their opponent to a score of seven or less, including the massive game against the Rangers cross-town rival, the Forest Hills Northern Huskies, where they allowed the Huskies to score zero points the entirety of the game. 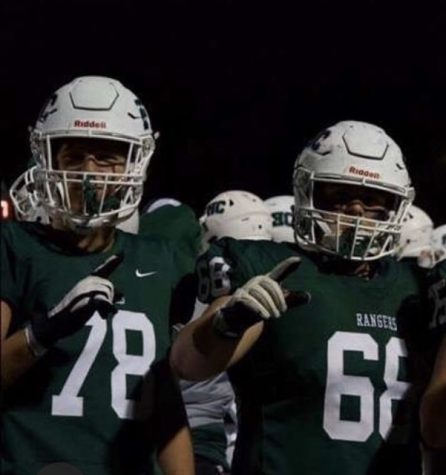 This tag-team duo of swimmers had a very successful season in the pool. Not only did these two have multiple individual performances that placed top three, but they also competed in several relays together that dominated the competition. In the team’s final meet against the Northview Wildcats, junior Emily Johnson accompanied by sophomore Maggie Hier raced in the 200-yard medley, and placed first with a time of 1:54.11; this wouldn’t be the only time where the duo finished first in a relay. As the team took on the Spring Lake Lakers, Emily and Maggie raced once again in the 200-yard medley relay and placed first overall. These two would go on to win three more relay races together, and both solidified their place in the state-cuts both individually, and as a relay team. “We are both so competitive, so we push each other so hard every day,” Emily said. “At practices, we laugh so much, and have such a great time together, so that great friendship between us, and our silly personalities definitely impact the way we swim and push each other.” 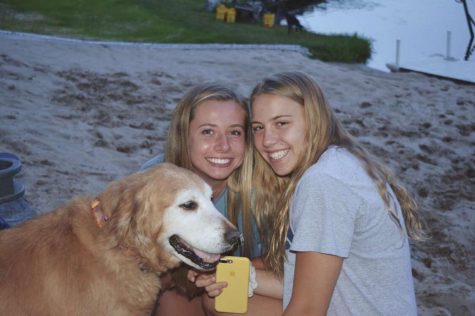