The Doughnut Conspiracy deems all other doughnut shops as ordinary 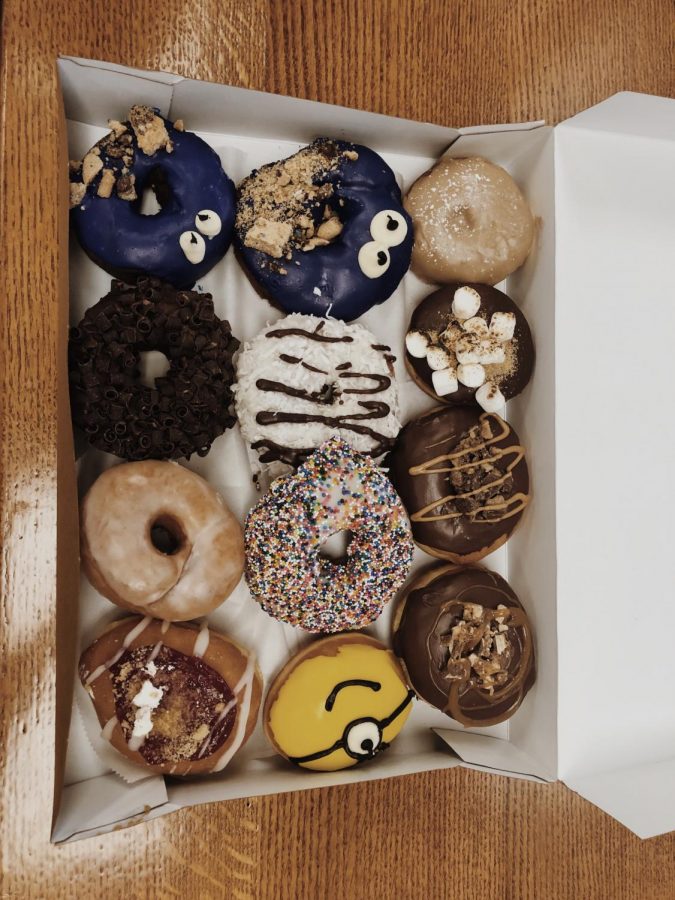 New Year’s resolutions have never been tasks I give up on after a few months. They are always purposeful, realistic, and prudent. Rather than neglecting and failing at a long list of unrealistic tasks, the optimist in me believes I can finish; I try to focus on fulfilling only a few.

Although this year, I gave up.

I had not eaten a doughnut since last December, and I did not plan to, considering it is nearing the end of the year. However, the intriguing and unique Doughnut Conspiracy was not an experience I could pass up—and I’m glad I didn’t.

A standard size, my favorite doughnut catches the eyes of customers due to deep and vibrant blue icing and chocolate chip cookie crumbs that are being regurgitated out of the “mouth” of the dessert. Two eyes made of black and white icing are located at the top of the doughnut giving it only one name that could fit—Cookie Monster.

Aside from the appealing presentation, the vanilla cake batter base is both rich and delectable. It complements the cookie crumbles, making not only the concept but the mix of flavors a success.

Doughnuts for breakfast on Saturdays or Sundays have become somewhat of a tradition in my household. Due to this, the doughnut titled Flapjack interested me. A predictable pancake-breakfast intermixed with the sweet flavor of a doughnut, surprisingly, make a great combination. The maple syrup flavored icing and the dough closely resemble the flavor of a pancake; moreover indicating The Doughnut Conspiracy does not only make exceptional doughnuts but also creates flavors that closely mimic the original concept.

It is challenging to make something with a unique flavor when the food is common and ordinary; however, The Doughnut Conspiracy did. In a box of a dozen doughnuts with most being uncommon, the glazed doughnut continues to stand out among all of them. It had a distinct flavor of glaze that places it far above other doughnut shops.

Though most of the sweet treats were a success, there were a few that fell short. A doughnut titled Devil’s Food Cake seemed to be the most promising; however, the taste did not live up to its presentation. Unlike the others, the cake batter is chocolate. The icing matches the base and has small curls of chocolate on top to make it appealing to the eye.

The appearance of the dessert enticed my hand to reach for Devil’s Food Cake first; although as I took my first—and last—bite, my mouth was left dry, and my expectations were not met.

Despite the low expectations Devil’s Food Cake set, they were exceeded after the others exceeded the confidence I already had in the business.

The company’s doughnuts are both eccentric and flavorful, which in turn, places The Doughnut Conspiracy far above its competition.