Phase one is beginning on the two-year stadium renovation project 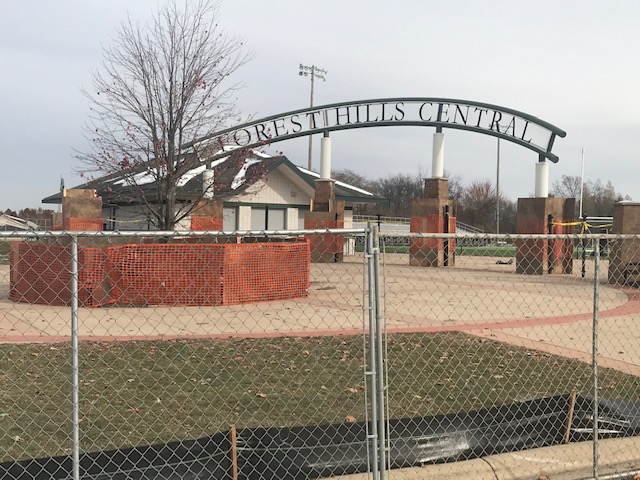 As the former boys and girls soccer coach and current athletic director, Clark Udell has seen a lot in his days working at FHC. Now, he is assisting in one of the largest construction makeovers on campus in recent memory: the renovation of the stadium.

Phase one will impact nearly all aspects of the stadium.

According to Udell, first of all, the track will be resurfaced. The extra space around the track by the main entrance to the stadium will no longer be fenced in with the track. The fence will be moved just around the track, so, therefore, that plaza entrance area will open up and there will be a lot more space for people to wander around, rather than the track taking away a lot of that space.

There will also be a brand new ticket booth put in the middle of the main stadium entrance, so there will no longer have to be tables set up for tickets during sporting events.

Phase one will also lead to a brand new concession area. The current concession building is being torn down, moved back, further opening that plaza area, and built larger. The front and center of the concession building will have actual concessions, with each concession window facing the field. There will then be a bathroom on each side of the building.

The new concession building will also have several new features to it. First of all, there will be a visitor team room located in the building. Finally, locker rooms that are close to the field. There will also be a storage unit included in the building. However, this new concession building doesn’t stop there. Since the building is being pushed back, it is being built on a hill so there will actually be a basement as well. Within this basement will be another maintenance/storage room and another team room. Once the whole project is done, that basement team room could be used for the sport going on down on the lower turf.

However, since the project is being done in two phases, the team rooms will be initiated to home teams and visitors at different times.

“The team room being put in the new concession building will start out as the home team room,” Udell said. “However, it will eventually become the visitor team room once the new building being put behind the home bleachers in phase two is done.”

Udell said the far side of the stadium will be undergoing several changes.

First of all, the fence around the far end of the stadium will be brought right up to the track, so all of the extra space past the track to the fence that exists right now will be minimized. The far end of the stadium will then also mock the main entrance and the brick pillars and broad iron fences will also be placed around that end, really cleaning up the image.  On a larger pillar in the middle of the far end, a brand new scoreboard will stand high above the stadium.

The additions on the far end of the stadium will really help to make it feel like it is an enclosed area, whereas now it feels as if there isn’t a real end to it. There will also be landscaping added behind the new gates to help with this enclosed feeling, and some of this landscaping will be targeted at covering up the view of the bus lot.

The auxiliary bleachers that once lay next to the home bleachers have already been torn down, and an easy ambulance entrance will replace them. Also, the stadium will be getting new lights and the pole vault area will be redone.

“It’s crazy to think about how much is being done,” Udell said. “The new stadium is just going to be awesome.”

Udell does not believe that the construction will impact spring sports.

“Now that [construction] is occurring in two phases,” Udell said, “there shouldn’t be much of an effect on spring sports. We were initially planning on doing it all in one phase, but if that would’ve happened, we would not have had the stadium for this year’s spring sports.”

However, that doesn’t mean there won’t be any adjustments.

“There will be effects on spring sports,” Udell said, “we just don’t know the total impact it will cause. However, it should all end up being feasible.”

So, there will be some effects, but as of now, everyone can plan on spring sports functioning as usual, with no major changes or drastic effects.

“I have scheduled spring sports as if nothing has changed,” Udell said. “How people will get in and out of the stadium will be different because of where is open and where isn’t and all of the sports going on with construction also going on will be crazy, but I was told to go ahead and schedule spring sports as usual.”

Phase two, according to Udell, will focus on the home bleacher area.

All of phase two will be focused around the home bleachers. A brand new press box will be built on top of the new bleachers. The home bleachers will first of all be expanded; they will go up higher and go down all the way to the track. The bleacher entrances will also change. Rather than entering through the front stairs as we do now, there will be stairs going up through the back, or underneath, of the bleachers going up to the middle of them. People will still be able to enter through the front of the bleachers, but the main entrances will be back underneath them, sort of like a tunnel up to them.

Since this phase is focused on the home bleachers, spring sports may be handled a bit different during phase two.

“The following spring, spring of 2021, the home bleachers will be under construction, so everything will actually probably be run from the visitors’ bleachers,” Udell said. “Everything is wireless for the scoreboard and we will figure something out for the sound system, so it should be fine.”

Overall, the FHC stadium will be experiencing the most change it ever has since it was first built.

“Our stadium has had small improvements over the years since it was built,” Udell said. “However, the actual footprint of the original stadium hasn’t changed since it was created. So, it’s really exciting that it’s really just going to be something new.”

The financing for the project is through a recently passed school bond.

“The money for the project is coming from a bond the school recently received,” Udell said. “Schools have the ability to go out and ask their community to donate money for them to build things, so the district asked for a bond last fall and it passed. And, since taxes didn’t go up much this past year, we ended up getting a lot more money than expected.”

Udell, who is an FHC graduate, is excited for the impact of the new stadium on the entire community.

“The new stadium will also allow a lot more space for students who aren’t in high school yet,” Udell said. “I used to be a middle schooler running around the entrance, and over the years, I feel like the space for middle schoolers has been minimized, and with this new stadium it will be maximized.”

However, this new stadium isn’t just going to be a benefit for fans; it will also be a major benefit for sporting programs.

“When you do things first-class, it just raises the standard of a program,” varsity football coach Tim Rogers said. “You look good, you feel good, you play good. [The new stadium] is going to be one of the top stadiums in the state of Michigan, and that can only improve the [football] program.”

The construction is providing some obstacles for football, but Rogers is willing to make the little sacrifices for the big product.

“[The construction] will definitely be an obstacle for summer football training,” Rogers said, “but thankfully we have a lower turf field so we will be able to utilize that. It will be a little inconvenience for the greater gain and I’m definitely willing to make that sacrifice.”

Even programs other than football will be positively affected.

“[The new stadium] is going to give us, and all of the FHC athletic teams using it, a lot of great benefits — having the locker room with all of the perks inside it and training room right there a short distance away,” varsity lacrosse coach Andy Shira said.

Shira even thinks a new stadium will lead to more students getting involved in athletics.

“I hope [the new stadium] makes kids who maybe don’t play a sport right now have a desire to want to join a team,” Shira said. “Whether it’s lacrosse or something else, I hope more kids get involved so they can be a part of the new stadium and experience the benefits first hand.”