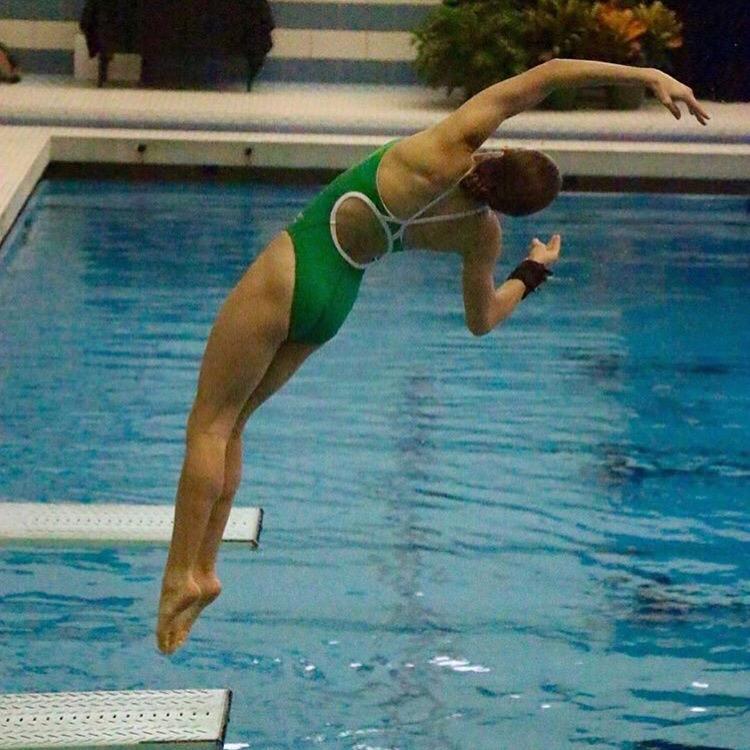 Two time State Champion with plans to become a third. Suddenly, it was all taken away…

Erin explained that when she was first felt the pain, she kept diving.  With instability and physical therapy, the frequent subluxations were expected to heal quickly; however, after two months of pain-related symptoms, Erin had an MRI which showed a tear in the labral cartilage around the front of her shoulder.  This diagnosis required surgery as well as six month period of no diving.

“This will affect my diving career as I am benched for the entire high school season,” Erin said.  “As to the effects after six months, I will have to retrain my shoulder to move in completely to complete my dive, but I have the upmost confidence that it will not hinder my ability to dive.”

Twice throughout Erin’s high school career, she has been named a State Champion.  She was hoping to earn that title for a third time this year.

“I was already planning ahead,” Erin said.  “It made me feel that all of my practicing has paid off, and I could not wait to get back on the boards and start working on bigger dives.”

Erin is planning to ease back into diving by mid-November.  The treatment for her torn labrum was three anchors in the bone, which reached her labrum.  She then spent three weeks wearing a sling, being careful to not make much movement.  She also went to physical therapy regularly and increased the mobility of her shoulder every six weeks.

She also works with a personal trainer and does visualization exercises to make sure she is as strong as possible when she is released from care in November.  Erin’s coach has also educated her about what she can do to help herself during recovery time.

“With Erin out of the pool because of her injury, she has been stepping up and helping out our coach,” said junior Colleen Kramer, Erin’s teammate and friend.

As a team captain, her coaches believe Erin’s spirit is crucial.  Being a leader is continuing on with grace and strength in the face of adversity.  She has been able to help with practice, judge, and encourage others to do well.

Colleen continued to explain that the both of them have been mutually supporting each other in the past few months in her recovery and has even took the time to visit with Erin after her operation.

According to Colleen, Erin is not only a great friend but also an excellent teammate.

“This time is so important to heal properly,” Colleen said.  “She should not stress about being unable to to practice.  Once she gets back into the diving, she will be just as good as she was before, if not better.”

When Erin has the ability to dive again, she plans to be recruited onto a college team, such as Michigan State University, University of Virginia, Notre Dame, or Clemson University.  She plans to visit all four colleges.

As well as Colleen, Erin’s biggest supporter through the recovery of her injury has been her parents.

“They have missed work to take me to my physical therapy and doctor appointments, making sure my goal of diving in college would be possible,” Erin said.  “When I had trouble seeing past my injury, they reminded me how none of my high school will matter anymore in year [because] I would be doing bigger and better things with my diving.”

Erin’s mother, Melissa Neely, has been cheering Erin on since the very beginning of her diving career.

“She wants to use her diving as a means to open up opportunities for college choices,” Neely said. “I know diving and studying something in the sciences will make her happy, and that is what we want for her.”

As Erin’s mother, Neely says Erin is a very caring person.  She has had the care and love returned to her by friends and coaches to get her through this tough time, and Neely is thankful for her support network.

“When you are faced with a challenge, it is difficult to believe things will work,” Neely said.  “As an adult, I know to put my faith in my future.  I’m trying to teach my children that, but they are people who have not lived through enough challenges, so it is a hard sell.”

Neely continued to say that a frequent conversation in her family has been on the topic of future.  It may not look how imagined, but that does not mean it will not be wonderful.  Although Erin’s injury is a huge disappointment, she must focus on what is to come.

“To be able to feel that nervous energy when I stand behind that board is something that I miss,” Erin said.  “I miss not being able to stand on the deck as a diver.”

Erin sets high standards for herself and is competitive.  For her, it’s a personal thing.

Neely states that other girls are aware of Erin’s records, and will try to beat them while Erin is benched.

“As her parents, we went through the same worries that she did in the beginning, not knowing what we were dealing with and how it could affect her doing something she loves so much, something that is so much a part of who she is,” Neely said. “It is hard to not be the one who can fix a problem for your child.”

Neely stated that it has been a journey of faith, perseverance, and commitment to healing.  Not traveling and being with her teams has been an adjustment for her family, mostly because participating in sports is time consuming.

“My strategy is to take it slow and be diligent about keeping my shoulder strength,” Erin said.  “I miss being able to physically contribute to FHC’s successes.”

It will take time for Erin to be fully healed, as her doctors are very aware of what she demands on her body.

“Listening when she was upset, making sure she had the right medical care and follow-up, making sure used her downtime wisely, eating well, and putting energy into moving forward is how we support her,” Neely said. “To be honest, [Erin] has surprised us in many ways as she has journeyed through her recovery with with her independence and persistence. I hope other athletes will look up to her when they have a challenge.”