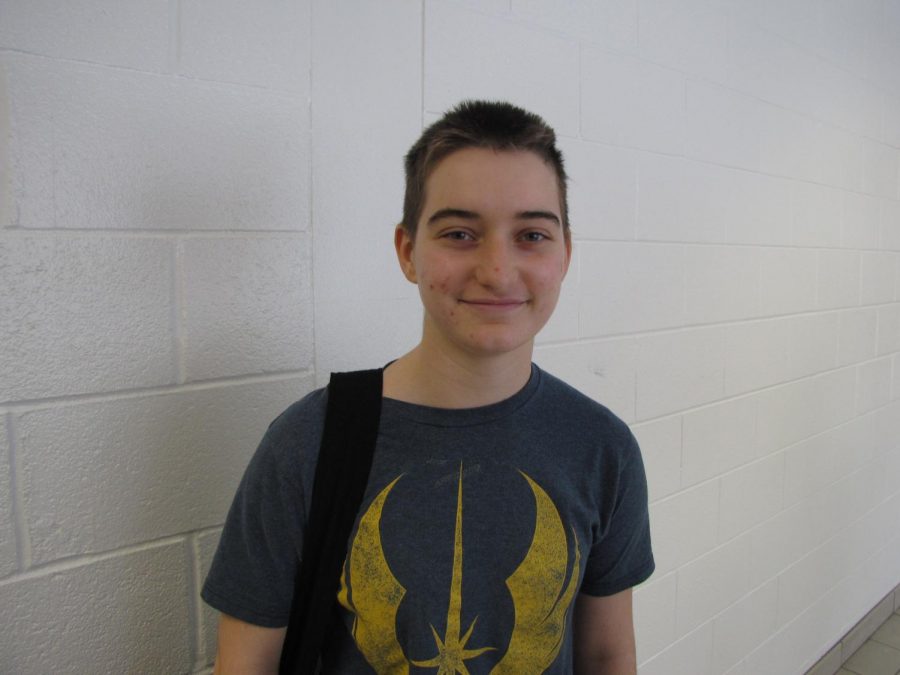 Elena Kelbley walks the halls of FHC just like everyone else, but she has a special passion: fencing.

According to senior Elena Kelbley, a big part of fencing is adapting to your opponent.

So when her dad entered his first national fencing competition and failed to do just that, she couldn’t help but laugh at the rookie.

“You can tell he was trying to act cool, but he’s a very large man who’s dressed like a marshmallow,” Elena said. “[After he lost a few bouts], he came to the realization that maybe next year [he] should train a little beforehand. But, it’s okay. At least he’s out there trying it.”

While this may have been her dad’s first time fencing competitively since college, Elena has been fencing since before she moved from New York four years ago. She currently fences at the West Michigan Fencing Academy with her dad and likes to joke that they can’t fence the same event because she will beat him.

Currently, Elena nationally ranked in her event called mixed foil. She competes at least once a month, if not more, and is typically in the top third of the people she fences with. Elena has put countless hours into achieving her rank, at one point fencing four days a week.

However, Elena has had to cut down her hours spent fencing, not due to a lack of commitment, but rather to make room for another passion: color guard.

“Color guard is a lot of fun,” Elena said. “I think I’m okay at it? I don’t know; I’m probably not a very good judge, but it’s really interesting to do something more physical in the band than playing. [Color guard is] super cool, and you look really coordinated when you all get it together.”

With their vibrant flags and flourished movements, color guard is just as demanding as playing in the band. Elena thinks it’s akin to the drumline in the sense that there is an extra time commitment that doesn’t apply to everyone else.

This is her second year on the team despite the strenuous schedule; Elena chose to continue simply because of the community of the team and band.

“I like the band culture a whole lot,” Elena said. “Everyone’s really friendly, and there’s just a bunch of members, and it’s a fun time when we’re not practicing, and we can hang out in between stuff.”

Besides spending time with wonderful people, color guard has other benefits, less conspicuous benefits, for Elena. Because most of the hard work with the flags is done with the right hand, Elena’s right arm– her fencing arm–has grown much stronger. Color guard has been like a conditioning exercise, one that pays off in competition through her increased stamina.

As physically difficult as fencing might be, the real challenge comes from the mental aspect of the sport.

“Fencing is very much a self-driven sport,” Elena said. “You have to figure out your own reasons for wanting to continue with this sport. I really like just the fencing and the mechanics of it, and I want to keep doing it. And I know that if I can get better, then I can keep doing it.”

More than that, Elena has found that committed and engaging coaches can assist in motivating beginner fencers who have yet to find their reason to continue. For that reason, she devotes her time and passion into coaching young children in fencing on a volunteer basis.

“It’s really fun to see all the little kids,” Elena said. “Some of [the other coaches] don’t like it as much. One of my friends’ coach, Doug–he’s this giant guy, super imposing–he just has no patience whatsoever for his seven-year-olds’ incessant questions. But I find it hilarious. So when he doesn’t feel in the mood to coach, Thursdays I go in and direct and start telling them the stories, try to keep them engaged, because I like having an audience. I like having fun and knowing other people are having fun, too.”

Additionally, it is important that those who start young continue to fence because of how complex the rules are. The younger you start fencing, the easier it is to gain a solid understanding of them.

Having fenced for many years, Elena has learned the nuances of the sport well enough to pass the referee exam, which is no easy feat. The test is given online, and those taking it are given 48 hours to complete it. For Elena, the fifth time was the charm.

Together, all these aspects of mental and physical toughness are why Elena is so devoted to her sport and so passionate about continuing her own development. She says that when she enjoys something, she won’t stop halfway through, and the same goes for fencing.

“I switched between a lot of different sports and this is one that really stuck because it’s highly mentally challenging and it’s super strenuous,” Elena said. “I don’t like to just completely turn my brain off. It’s kind of like a game of chess, but you’re doing it in real-time with your own actions, which is cool.”