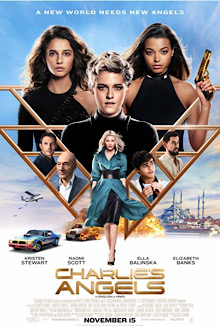 As a child, one of my favorite movies to watch was Charlie’s Angels. Curled up on the couch in front of the TV with my sisters, I would religiously watch Cameron Diaz, Lucy Liu, and Drew Barrymore kick butt on the screen. Their female empowerment was what I loved.

In my young mind, I thought my fierce older sisters and I were the perfect trio for a movie like this one. Smart, witty, and strong, we would be the ideal fill-ins if another remake was ever made.

So when I began to see trailers for a brand-new Charlie’s Angels, I cannot say I wasn’t disappointed in the casting. I was, however, intrigued; how could another movie do the first two justice?

The task—seemingly impossible—was taken on almost single-handedly by Elizabeth Banks, who starred in, produced, and directed the entire film.

The plot starts out relatively simple: the original Bosley (played by Patrick Stewart) retires after taking the Townsend Agency international. Bosley becomes a title for people who take on his job in various places all over the world; men and women of all nationalities recruit and train Angels to help people in need.

But retirement doesn’t stop Bosley from participating in the life he created for so many.

Enter Elena Houghlin, a brilliant, naive scientist played by Naomi Scott. Elena, with the help of others, creates a sustainable, revolutionary energy source for the future: Calisto. Everything about Calisto is great; besides, of course, the deadly side effects of its use.

Elena reaches out to the Townsend Agency to help her stop her bosses from putting Calisto into the wrong hands for profit. From there, she meets Jane (Ella Balinska) and Sabina (Kristen Stewart), two Angels whose missions become aligned with Elena’s as their motives collide to reach the same outcome.

The movie continues mostly as I expected; Sabina, Elena, and Jane set their differences aside and work together harmoniously to stop various forces of evil. They each have a necessary trait to bring to the table, and they each grow and improve their respective shortcomings.

I was pleasantly surprised at some aspects of the movie. The lead roles were almost all women. For instance, Elizabeth Bank took on the historically male role of Bosley. The Angels didn’t need to be promiscuous to beat the bad guy, which I loved. It was unlike the previous movies where the characters’ sexualization was almost always the reason that they were able to win.

Another part of the film that I thoroughly enjoyed were the unforeseen plot twists. As soon as you thought you had it all figured out, something new presented itself around the corner. The plot twists kept me on my toes, and I was glad to see that the movie didn’t become mundane—as it easily could have.

Overall, Charlie’s Angels—action-packed and female-empowering—was a great film. It took the original two movies and made them relevant to the time we live in today. With cameos from amazing, well-known women, it gave the viewer a can-do attitude.

And although my sisters and I were unrightfully left out of the movie, I do have to say that Kristen Stewart, Naomi Scott, and Ella Balinska did the original Angels justice; they will continue to inspire the youth of today’s world as Cameron Diaz, Lucy Liu, and Drew Barrymore did for me.