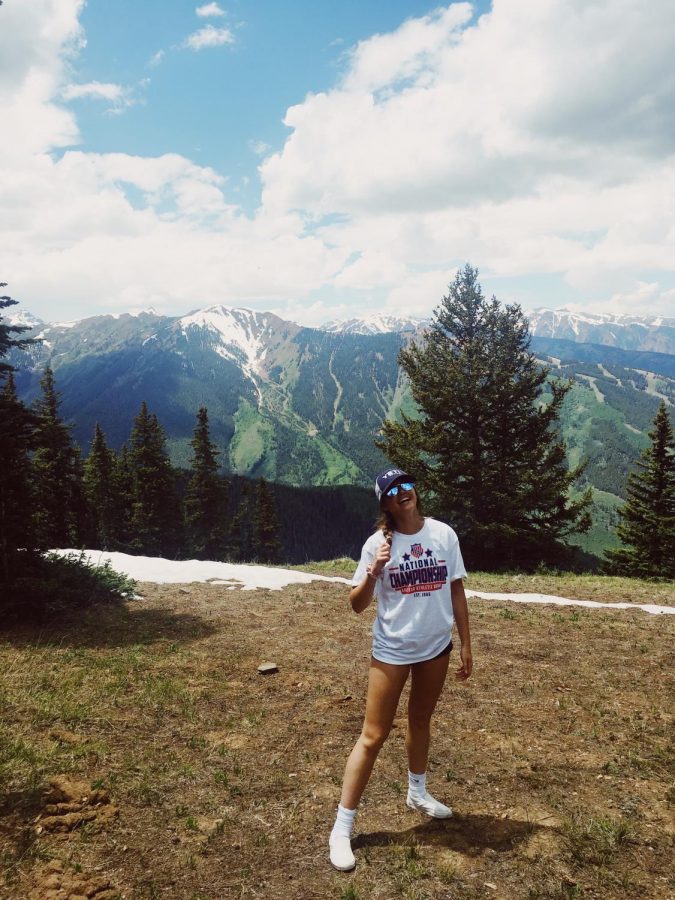 The schedule for an average high school student includes the same things: waking up, going to school, coming home or going to an extracurricular, completing homework, and then finally going to bed. But freshman Ally Werkema has to balance two sports along with school and friends.

Ally believes that a lot of people think of her as “the volleyball girl.” However, volleyball is not the only sport that she participates in. What many people don’t know is that she has been horseback riding longer than she’s been playing volleyball.

“I play volleyball, and then I have two horses,” Ally said. “I’ve been [horseback riding] for about six years now, and I’ve been playing [volleyball] for four years.”

Ally has to travel far for her lessons and competitions. Because of this, not many people see her while she’s riding; however, the love she has for horseback riding is not lessened by this fact.

“Not a lot of people know that I ride horses, “ Ally said. “[Horseback riding] is my ‘under-wraps’ sport. I’m trying to qualify for national finals, but I just don’t tell a lot of people.”

Even with volleyball season going on, Ally is still committed to horseback riding. Though some would not take riding as seriously as any other sport, it takes just as much conditioning and energy as any other. It also includes competitions much like well-known sports.

“People think [horseback riding] isn’t a real sport, but it takes a lot of skills,” Ally said. “Right now I’m trying to qualify for Maclay Finals, which is the top 100 riders in the country that jump.”

In order for her to keep up with such a high competition level, she has to be consistent in her practice. This means riding Monday through Sunday while still consistently attending volleyball.

“I do [riding] through a barn in Lowell,” Ally said. “I go every day, even during volleyball season, and ride for three hours.”

There are many tradeoffs Ally has to make because of the commitment she has to her sports. Practices, tournaments, and competitions are going on twenty-four seven. These things are hard enough to balance when it concerns only one sport, let alone two.

With having such a packed schedule, Ally must live a balanced life. Having so many activities going on at once has forcefully nudged Ally into coming up with many creative ways to finish her school work.

“I do homework in the car mostly, or I wake up an hour early to finish it,” Ally said. “I usually give myself a limit, so once it hits one in the morning I have to go to bed, and then I finish the rest of my homework during classes.”

Homework is Ally’s most time-consuming activity outside of riding and volleyball. Homework, however, is not the only school-related activity that sometimes impacts her sports. She is often absent from school because of how small the horseback riding scene is in Michigan.

“With riding, there are no competitions in Michigan, so I’m in Kentucky, Florida, or Ohio,” Ally said. “Horse shows last all week, unlike my volleyball tournaments which only last a weekend.”

Because of this, Ally is often caught up in the debate of which is more important: school or sports. School is taken very seriously in her family. She is a straight “A” student and is in many advanced classes. Missing school for these competitions has proven to be somewhat problematic. Many of the girls that Ally is competing with don’t have these same obstacles.

“Most of the girls I compete with don’t go to normal school; they have private tutors, and they don’t have other sports to balance as I do,” Ally said.

Ally’s busy schedule may be doing more harm than help, but it has taught Ally many important things. Time management, anti-procrastination techniques, and many more lessons are learned by her every day.

As she keeps learning, Ally’s persistent mindset is what keeps her afloat throughout the school year.

“You can never procrastinate on anything,” Ally said. “You just have to make sure to get it all done to the best of your abilities.”