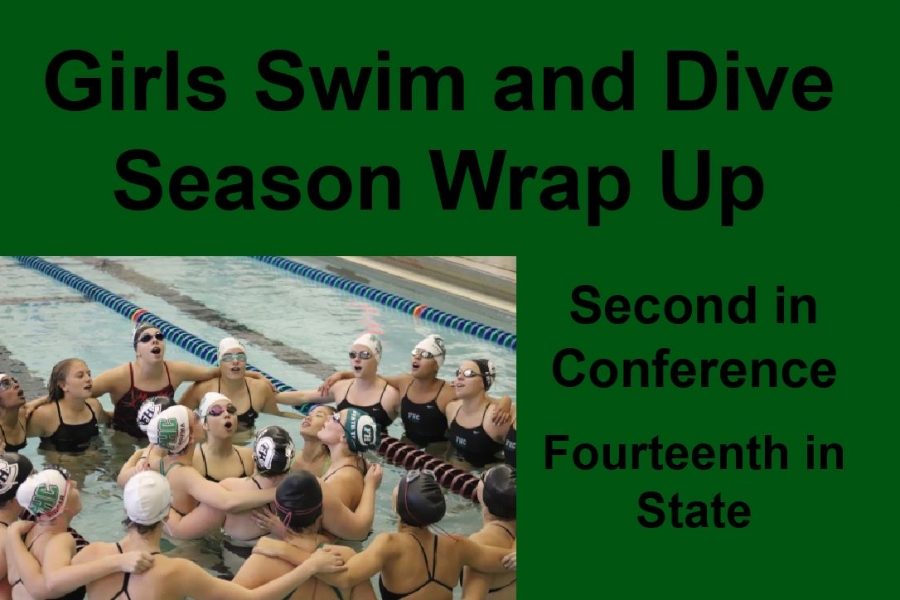 The girls swim and dive team’s season has concluded, and once again the girls have had an amazing season. Led by the captains Olivia Jeong, Olivia Luplow, and Sarah Schenck as well as talented underclassmen such as sophomores Jessica Doyel and Maggie Hier, the girls got second in the conference meet and fourteenth in the state finals. This continues the tradition of excellence that Coach Neat has established in this program. Coach Neat shared his thoughts on the season overall.

“I felt that our season was very successful given the smaller team size and the younger participation that improved so much from the motivation of our seniors,” Neat said. “This year it was more important about learning to rely on team members as we learned to work together and that not one person could be relied upon to carry the entire load.”

The season began with some uncertainty. Last year’s team was incredible, taking tenth in states with a strong senior class. With the loss of the senior talent, especially Jessica Schellenboom, the continued success of the team was not yet established.  However, this year’s Rangers soon proved themselves a powerful team in their own right. Olivia Hooper talks about the excitement of the new season.

“It was exciting to see how the returning team members performed compared to last year and it was fun to see what the new members brought to the table in order to further the success of our team this season,” Olivia said.

The year began with part of the team entering the Spartan Relays Meet. The girls had a two-year streak to uphold in the meet and they did it in the closest fashion possible. The relays took top three in six relays and ended up taking first tied with Midland Dow. This was a bizarre yet triumphant meet for the Rangers and started them off with a win under their belt.

Next up was another big meet, the Zeeland Sprint Meet. Most race distances were halved in this meet and it gave the short-distance speed swimmers time to shine. Senior Sarah Schenck excelled, winning the 50 fly and the 100 IM. Several other strong performances combined for a second-place finish in this meet, just losing to Zeeland.

Finally, the first dual meet of the year came against Rockford. While hopes were high, the Rangers were outclassed and lost by a devastating score of 64-120 at home. That was the last meet against one opponent for three weeks and it would leave a bitter taste in the swimmer’s mouths for the coming weeks.

The next meet was against Hudsonville and Holland Christian. The Rangers were scored individually against both and unfortunately lost to both. Holland Christian was the closest score all year for the Rangers, 95-91. Hudsonville, on the other hand, was a blowout, with the score being 110-76. This meet was followed up by the West Michigan Relays meet, which the Rangers secured seventh at. Throughout these meets, the Rangers began to secure their MISCSA and state cuts, building up to success in the latter part of the season.

Finally, the Rangers arrived at the beginning of the conference season. The Rangers burst onto the scene with a triple win, beating Grand Rapids Christian, Forest Hills Northern/Eastern, and Grand Rapids Catholic Central. They beat all of them by such a large amount they ended up exhibitioning races, essentially forfeiting them to the other team.

Next up was the MISCA meet. The Rangers had an amazing ten qualifiers and did well, with a standout performance from Olivia Hooper, who took sixth in the 100-yard backstroke. After this, the Rangers once again won three straight conference meets by large margins against Jenison, Spring Lake, and Northview. Jenison was a particularly important meet because, at the time, Jenison and FHC were tied for second in the conference. However, FHC ended up strongly securing their place in second with a 101-79 victory.

These meets brought the Rangers to the conference meet. The girls placed well and cemented their second-place standing in the conference over Jenison, who they had to battle to beat 335-321. This would be the last meet where the team would be united. Sydney Kushak loved how the team’s hard work showed in the meet.

“We work so hard as a team, with our morning and afternoon practices that achieving goal times and doing really well at conference paid off,” Sydney said.

The state meet was a huge success. The Rangers got 14th as a team in the state and several swimmers got top ten individually. The standout race was the 200-yard medley relay, swam by Olivia, Jessica, Margaret, and junior Emily Johnson.  The Rangers took third in the state in this relay, a huge victory for a great team. Coach Neat was excited about the successful conclusion to the year.

“It is always rewarding as the coach to see the hard work pay off for so many individuals. To chase a dream and then be competitive in the biggest meets of the year is fun to watch unfold every year,” Neat said.