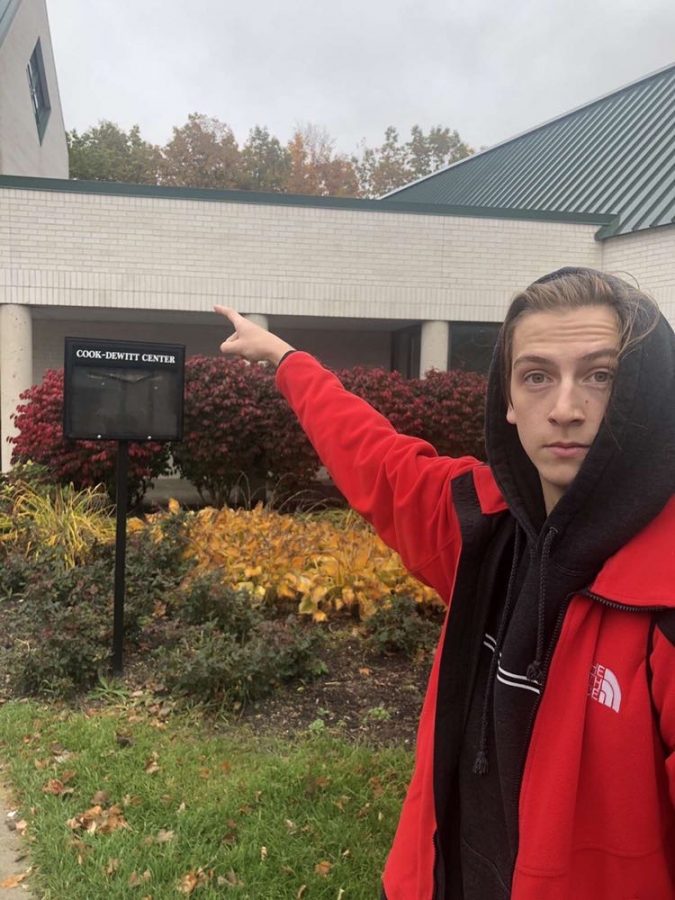 For most teenagers, finding time outside of school to express creativity can be a struggle. Managing school and sports can leave teens feeling tired and barren of free-time. This balance, however, has never been hard for sophomore Cam Dewitt; expressiveness is intertwined into each ingredient of his life.

If Cam sees something he likes, he feels compelled to try it for himself. This statement applies to all of Cam’s current hobbies and interests. His enthusiasm for creativity started early in his youth, and he has nurtured these interests into his present-day passions.

At a young age, his creativity was expressed through music. The guitar was Cam’s first instrument, and his journey started when he was just nine years old. But, his inspiration came from a drive different from others.

“My friend and I used to play Guitar Hero a lot,” Cam said. “So I started doing the real thing, and I thought it was really fun.”

This idea is repeated in his life, and he has found other people who share the same interest.

Cam has played in bands in the past and makes it a point to play every day. The individuality he enjoys in music also translates to the feeling of freedom that skateboarding brings.

“I’ve been skating for about six years,” Cam said. “I started because of playing Skate 3. Most of my interests are from playing games and stuff. [When I started], not a lot of my friends did it, and I was the only one.”

Being the only one of his friends to skate separated Cam from his peers, but his passion for skating and courageous attitude kept him involved in the activity.

“[I like skating because] you can kinda do whatever and nobody really cares, so it’s really fun,” Cam said.

Skating holds some of Cam’s favorite memories and provides a great pastime during the summer. Now, Cam has more friends that also share an interest in skating and more inspiration to stick with his hobby.

“A couple of summers ago, [sophomore] Cooper [Dlugos] and I went to Pine Ridge, and I ollied down the six-stair,” Cam said. “I felt really good, and I shouted [out of excitment].”

Even though practicing skateboarding takes time, Cam doesn’t lose his focus on other things.

While still maintaining his grades, Cam makes time for these hobbies. When football season returns, these hobbies may be put on back-burner—but not forgotten.

“It can be hard to manage school and football,” Cam said, “but since it’s at the beginning of the year, we [can] kind of ease into our school-work, [so] it’s not as bad. Although, I could imagine it being harder during a winter or spring sport.”

It was in third grade when Cam’s passion for football ignited and opened up another source for his drive and enthusiasm for new experiences to be released.

“[Football is] really fun,” Cam said. “I’ve stuck through it. I skipped one year in fourth grade, but I really missed it, so I went back. There’s a lot of action that goes into it, and it’s really the only sport that I’m into.”

Football can create a lot of stress because it is one of the most physically demanding high school sports. To continue to uphold to pride, excellence, and tradition of FHC, football players invest a great deal of time and energy.

“[My] least favorite thing [about football] includes conditioning,” Cam said. “It’s really bad. We had these marines come in over the summer, and for a couple of days, they really beat us up. It was brutal.”

Cam plays lineman, left guard, and left end on defense. These positions can be some of the most demanding strength-wise. Because of this, Cam already has plans for next year’s season.

“I definitely want to get stronger,” Cam said. “I’m one of the smaller linemen, so that’s a big part of showing up against those bigger guys.”

All of Cam’s interests stem from his inspiration, curiosity, and drive. He is proof there is always time to relax and find happiness while managing the stress of life.

“If something seems cool to me I want to try it out,” Cam said, “but with most things, I tend to push it away if I’m not good at it. But some things, I really like, and I want to keep pursuing, so I keep on going with it.”