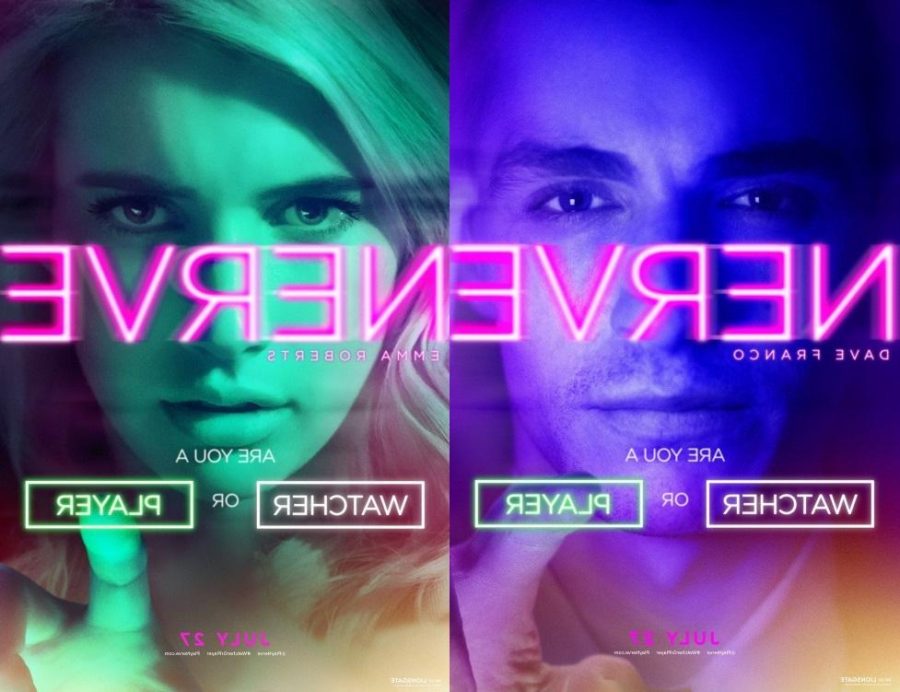 When I first heard of the new movie, Nerve, my initial reaction was anything but excited. It was a warm July day, and to be completely honest, at the time I would have rather been swimming in the shining waters of Lake Michigan than in a dark and cold movie theater. But after a full day of swimming and getting sunburnt, the group conclusion was to head to the theater and check out this new movie.

The movie began with high school student Vee Delmonico (Emma Roberts). Her shy and unadventurous personality made her the “odd man out,” which eventually led her to stepping out of her comfort zone and into playing a game of ultimate truth or dare, called Nerve. It wasn’t too long before her dares became more and more dangerous. As she teamed up with another player named Ian (Dave Franco), she was soon the crowd favorite. As she and her friends competed to win popular vote, Vee received many dares, each more audacious than the last. When the movie came to a shocking plot twist, Vee and the other players quickly, and against the odds, came up with a plan to save the day.

Now, I know what you’re thinking; this movie is too cliche and pointless to watch. It’s storyline sounds typical and it’s a waste of $10. But, trust me when I say that the movie, Nerve, is the best movie I have ever seen.

To start off with, my favorite part of the whole movie was the soundtrack. The songs fit perfectly with the scenes and immediately caught my attention. Electric Love (by Borns) along with Kamikaze (by Mo) still continue to play throughout the halls of my house.

Another one of my favorite parts: the casting. In my personal opinion, the casting for each of the main characters was spot on. Emma Roberts, playing Vee Delmonico, fit the role perfectly and I couldn’t imagine anyone else doing a better job. While Vee may have started out shy, throughout the movie, her daring and fun personality was introduced. Playing Vee’s partner, Ian, was Dave Franco. His rebellious and quirky personality shines through in his dares and other dangerous scenes. Together, both actors had great chemistry and they both portrayed the role of love excellently.

On other review sites, Nerve has not had the highest of ratings and ranks, which is surprising. On one site, Nerve was ranked a 65% and was said to have many fundamental flaws. Other sites ranked it 3 out of 5 stars.

Despite what other movie review sites say, I would say Nerve is 5 out of 5 stars and a “must see”. Although I may have missed out on an evening out on the water, seeing Nerve was definitely worth it. If you’re looking for an action-packed, exciting, and fun movie to see, I would 10/10 recommend Nerve.