Hockey bounces back from slow start to the season, goes 1-1 against rival East Grand Rapids and Jenison 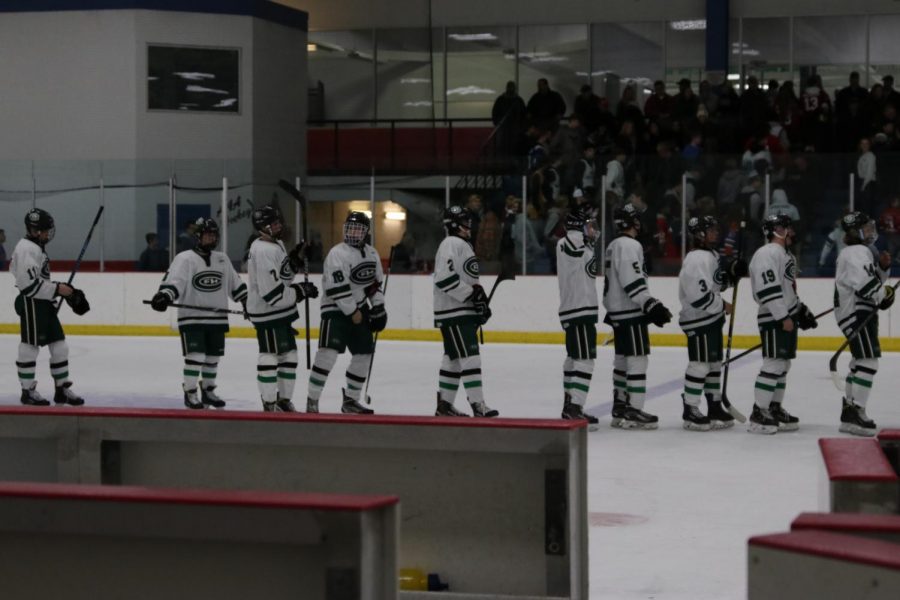 After starting the season slowly with two losses against Byron Center and Allen Park, the hockey team took on East Grand Rapids and Jenison in back to back days on Friday and Saturday night. With key players still absent from the lineup and EGR beating Allen Park—who beat FHC 2-1—3-0, there were whispers of concern among the Ranger faithful ahead of the rivalry game against the Pioneers on Friday night.

The first period was end to end, full of excitement, and most evidently, goals. Just five minutes into the game, East Grand Rapids scored to start things off, and the Pioneers immediately followed it up with another goal less than a minute later. Already, the Rangers were in a deep hole, which can be even more difficult to dig out of as emotions run high in the rivalry game.

However, just over 30 seconds later, senior Johnny Mielock brought the Rangers within one as he made it 2-1, recording his second goal of the season. Full of physicality, the first period saw two more goals, with one for each team. Just as the Pioneers looked to bring the game out of reach early with a 3-1 lead, junior Mason Kelly returned the favor and brought the game to a 3-2 deficit for FHC.

The second period, on the other hand, was quite the opposite. There were far fewer offensive chances for both teams, and the second 17-minute segment ended with the same score as the first: 3-2 in favor of EGR.

For the first seven minutes of the third and final period, there wasn’t much action once again. Mason then scored his second of the game with 9:30 remaining, and the game was tied at 3 apiece with only the final stretch of the game to go. The momentum skyrocketed as the Rangers scored two unanswered goals, and chance after chance was coming for FHC. On the night, the Rangers outshot the Pioneers 30-20.

The pressure was finally too much for East Grand Rapids to sustain as senior Ryan Jeffreys broke the ice and gave the Rangers a 4-3 lead with only 3:13 left in the game. With the clock winding down and the Pioneers in need of a goal, EGR pulled its goalie, which resulted in an empty-net goal for the Rangers and a final score of 5-3 in favor of FHC.

While Mason topped the box score with his impactful offensive performance and two goals, junior Jacob Campbell and senior Hayden Sarjeant each recorded two assists on the night as they distributed to their teammates well for the entirety of the contest. One of the huge problems in last week’s games was costly turnovers that resulted in transition opportunities for the opposing teams, and this was cut down quite a bit on Friday night.

Saturday’s matchup with Jenison did not go to plan for the Rangers. There was much less action than the night before, although FHC did record 37 shots on goal. In Jenison’s 2-0 victory, the two goals came in the first and second periods. Both of these goals came from turnovers in the Rangers’ own zone, which has been the common denominator in a lot of goals given up so far this year.

While FHC did record 37 shots and forced Jenison’s goaltender Drew Bobeldyk into making many saves, the Rangers could never find the back of the net, and their momentum was hindered by the costly penalties obtained throughout the game. Unnecessary and hurtful penalties put the Rangers at man-down disadvantages and disabled them from forming a comeback.

Sophomore Jake Munger made his season debut between the pipes on Saturday night, taking over for junior Gavin Brady. Between the two of them, their combined save percentage was .893, with Gavin making 17 saves in the win over EGR and Jake recording 25 saves in the loss to Jenison.

With the 1-1 spell over the weekend, the Rangers move to 1-3 on the season but start off the conference slate with a 1-0 record. Matchups with Walled Lake Northern and Cabrini are on the horizon for this weekend, with both games taking place on the east side of the state.