Among her horses and animals, Dani Ohlman feels joyful 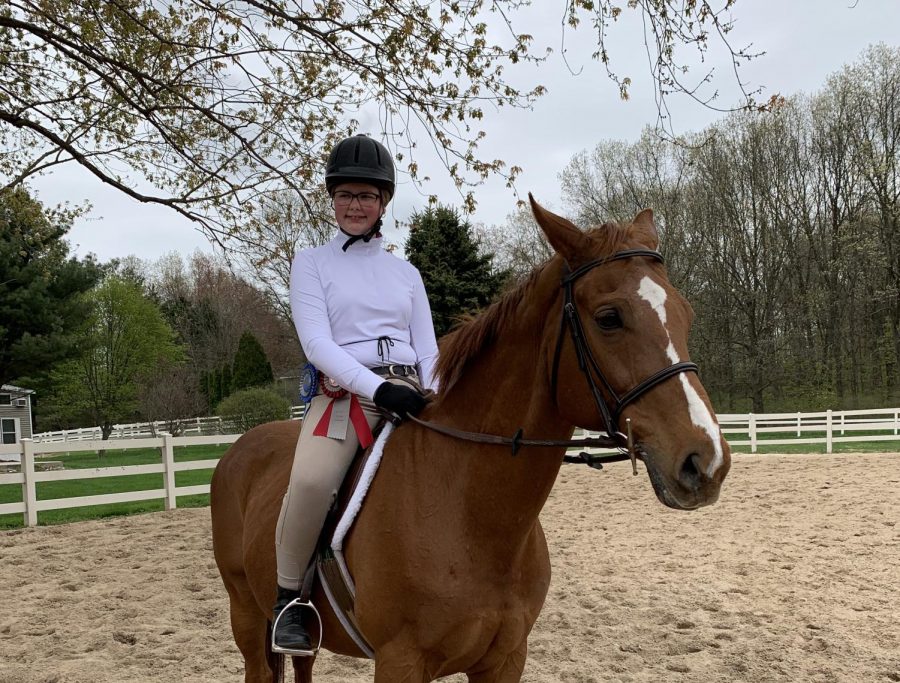 Each Friday, as the week winds to a close and freshman Dani Ohlman departs from school, she finds herself in the backwoods of Grand Rapids. Here, she is surrounded by fresh air, trees, and an open sky, as well as her favorite animal: horses.

Each Friday, the hour that Dani spends horseback riding at White Oak Farm is a pastime that she looks forward to throughout the week.

“Horses are my favorite animal,” Dani said. “They make me feel happy. [My favorite horse at White Oak Farm], is named Nelson. [I like him because] he’s big. He’s like a big, gentle giant, and he’s slow.”

Dani’s parents introduced her to horseback riding at a young age; specifically, she began riding when she was five. Throughout numerous years, Dani and the horses she’s ridden have formed a bond. This relationship and enjoyment for riding horses is something that has had a significant influence in her life, according to Dani.

When she rides, Dani works on achieving new skills, and in recent months, she has accomplished a significant goal: cantering. Cantering, as Dani describes it, is when the horse begins to run, and this has engendered a sense of excitement, as well as pushed her further into the world of horseback riding.

“I started cantering,” Dani said. “It’s sometimes [difficult] when the horses don’t listen. [When this happens] I sometimes stop and start over. I’ve been working towards [this goal], and [when I did it for the first time], I liked it. It was fun.”

In the time she’s been riding, Dani has entered two shows where she is able to display the skills she’s learned. Although she practices more than she shows her horses, the skill she will soon begin working on will allow her to enter into more shows.

Dani says that soon, she will begin jumping. This skill, according to her, is a substantial step forward. However, she is unsure of how it will work because she hasn’t begun learning it yet.

“I’m excited about jumping because it’s something I’ve been looking forward to for a really long time,” Dani said. “I hope I can work on jumping higher jumps. [I want to do this] so I can enter different kinds of shows and do different classes.”

Entering these shows also helps Dani because she learns more about the horses she rides by doing them, such as being able to observe different horses’ reactions during different experiences.

Dani is able to further her time spent around animals outside of riding horses, as well. This is the case because she lives on a farm, where she is surrounded by several different animals: chickens, dogs, and alpacas.

“One of the alpacas jumps in the air,” Dani said. “[His name is] Jasper. I think it’s funny. [My siblings and I] laugh at it. [The alpacas] make funny noises, too.”

Her family’s two dogs also cultivate happiness in Dani’s life. Her consistent companionship with them is an aspect that Dani appreciates and that she believes her dogs appreciate, as well.

“I like our dogs,” Dani said. “I spend a lot of time with them because it makes them happy, and I like playing with them. [With them, I like to] throw a ball or just run around. [When they’re happy], they wag their tail and jump up.”

In the future, Dani hopes to continue to spend more time around her animals because around them, she experiences happiness.

“I plan on [continuing riding horses] because I really enjoy it,” Dani said. “I just really like being with the horses. I’ve been doing it for a really long time, and I really enjoy it. It is [a big part of my life]. [When I’m around animals], I feel happy.”