The cameras of FX have faces behind them 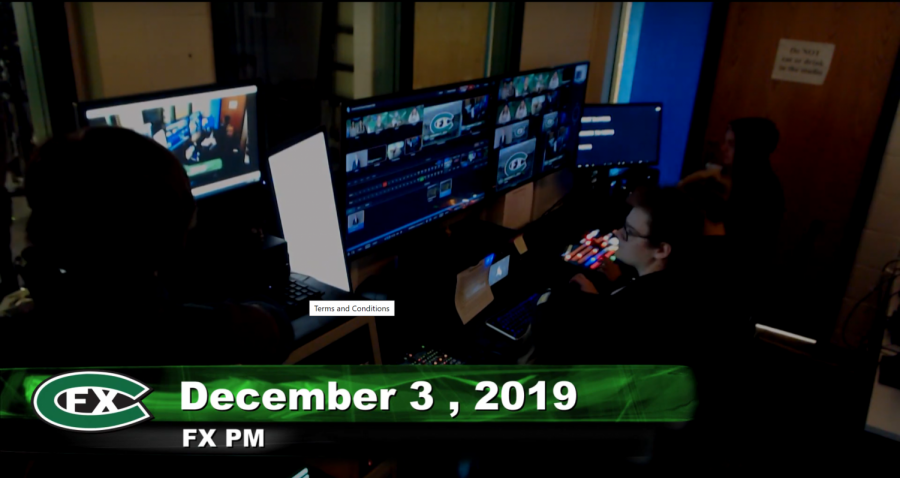 FX teacher Jeff Manders’ métier is film. He loves the art of it, and he has been improving his cinematic skills for a long time.

“I worked in TV for about 10 years,” Manders said, “and then [I] quit to go back to school. [After getting my degree], I was hoping that I would get a job working at a school where I was teaching a class like FX. [I like that] I can teach [my students] about news gathering, story-telling, editing, and filming, [but] then we can also be able to do a live TV show every day. I like the adrenaline rush, the stress, and the chaos.”

The FX class is managed by the students—with the help of Manders—and they perform a live show almost every day during the school week. They cover various topics relating to the school by conducting interviews, and they work hard to entertain their audience.

The majority of the students involved in FX work both with the cameras and on-air where they present their stories and information like newscasters.

Manders encourages his students to try to go on-air; however, there are a handful of students that prefer working strictly behind the scenes. With his background in television, Manders understands this, and he respects his students’ decisions.

“I think back to when I worked in television,” Manders said. “I was a photographer and editor, and I didn’t want anything to do with being on-air in front of the camera. I liked the creative, artistic side of video-making—the visual, story-telling side of it all. And I liked the technology and learning how to do different things. I didn’t want to be in front of the camera; it wasn’t my thing.”

The students who opt out of going on-air feel the same way.

Junior Joe Clancy chooses to avoid the anxiety that comes with going on-air because he feels that working the cameras and control room is less pressure.

“It makes me really nervous to go on camera,” Joe said. “Just thinking about people watching me [stresses me out], so I prefer not to.”

But nervousness isn’t the only reason that Joe prefers working behind the scenes of FX. He loves cameras; he has been fascinated by them since he was a kid.

“Five years ago, my cousin gave me his twelve-year-old camera that he didn’t use anymore,” Joe said, “so I played around with that for a couple of years before I really got into it. I’ve always enjoyed using cameras and doing [things that involve them].”

Working cameras isn’t the only task that comes with FX; the students are given the job of developing and producing stories about FHC and its students. Joe and his peers also handle the transitions between shots and supervise what the audience is seeing to make sure it is correct.

“The control room is definitely the most important part of [FX],” Joe said. “Making sure that people can actually hear people talking and see them as well [is very important]. [You] just have to make sure everything flows.”

Overall, Joe feels he gets the same experience as everyone else—even if he refrains from going on-air. Inspired by his FX class, he’s considered working with cameras in his future.

“[FX] is very fun,” Joe said. “It surprisingly never gets boring working the same thing over and over again. [Pursuing something in the film industry] would definitely be the dream.”

Joe isn’t the only student that FX has had a lasting impact on.

Senior Soren Dominczak also neglects opportunities to go on-air, but he feels that FX has broken him out of his shell.

“I’m camera shy,” Soren said. “I’m too nervous to go in front of the cameras; I feel like I’m going to mess up.”

Despite this fear, Soren has tried to push through, and with the encouragement and support of his friends on FX, he went on camera a few times last year.

“[FX has] made me more comfortable in front of a camera,” Soren said. “When I’m doing news and stuff, I don’t stutter my words as much as I used to.”

Building confidence in presenting is a great skill to take away from FX, and while Soren still abstains from being on-air often, it doesn’t make the class any less beneficial for him.

While Joe enjoys working the cameras, Soren relishes in a different aspect of FX: interviewing.

“I like that we get the freedom to go around the school and get interviews,” Soren said. “[It allows us to interact] with a bunch of different kids and learn about a lot of new things and topics that are relevant to us as high school students.”

Having fun with interviewing, cameras, and reporting is the appeal of FX, but Manders’ main goal of the class is to help students see the inner-workings of newscasting and most importantly, teach them about handling responsibilities and meeting deadlines.

“In terms of a high school setting, it’s a different kind of challenge for some kids,” Manders said. “It’s a huge challenge in terms of teamwork and working together, overcoming deadlines, getting creative, and having that responsibility to get it done. There is no ‘oh I forgot to do that.’ Nobody can just not turn in a story; that’s not how it works.”

Manders encourages all of his students to continue developing their skills through FX, and he still feels that rush of adrenaline after every show. He loves the class, and he enjoys working with students—whether they’re behind the cameras or in front of them.

“I think it’s a great experience for kids to try something different [and] be creative,” Manders said. “Anytime you can work on your communication and story-telling skills in any sort of class is good for anybody. I think all kids should do it.”