Give them a chance 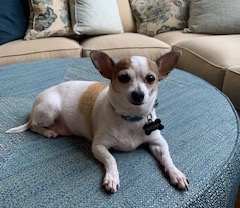 Old souls are being forgotten about.

I don’t mean those that reside within grandparents or someone who puts on a facade of being older than they are, but rather those who have four furry legs, and a chippy, wagging tail: dogs. We see the ASPCA commercials that show off the sad eyes of those who need homes, many of which have a certain youth that many find charming.

Yet, we forget about an entire population that has hearts the size of mountains and simple needs that we can provide.

Older dogs are forgotten about.

Older dogs are always neglected when it comes to adoption. Families tend to choose the fluffy little puppies that are guaranteed years upon years of love, rather than a soul that is greying at the eyes.

Quite recently, I was ignorant towards this. I felt that adopting a young pup would be much better than getting an older dog. It wasn’t until I met Sugar that I found out that giving these older dogs a chance can unleash a plethora of youth that they were never able to display prior.

We first discovered Sugar during the summer of last year when my mom and I were sitting on the couch watching House Hunters. The picture depicted a small white and brown chihuahua, with bright brown eyes and wrapped in a cream-colored fleece blanket.

We then proceeded to scroll down to her age and saw that she was nine-years-old. She was considered to be an elderly dog; however, we didn’t see her age. We instead saw this poor dog who had not had a real home for nine years of her life. She had never experienced real love from a forever home before.

We called the rescue center that she was located at, and we went to visit her. Right then and there, we knew that she was a part of our family.

She brought about her a different type of spunk that I have never seen in any of my other dogs— she certainly goes against all stereotypes that older dogs carry with them.

She scurries all around the house like a wild animal.

She uses her faint, little voice to bark and howls like a beast at the other dogs when they get in her way.

She loves to play and spend time with people—which is unusual for many chihuahuas.

What I learned from this extraordinary pup is that age really is just a number.

It is such a cliche, yet it is so true. Her age does not define her. She carries the liveliness that a one-year-old puppy has, yet her nine years masks that, and it masks her inner youth.

All she needed was a glimmer of a chance in this world.

Dogs are quite simple; they need love.

It is up to society to give them that so desired love before their time closes, and they never feel what it is like to be a part of a family.