The Random Acts Of Talent try-outs are tonight 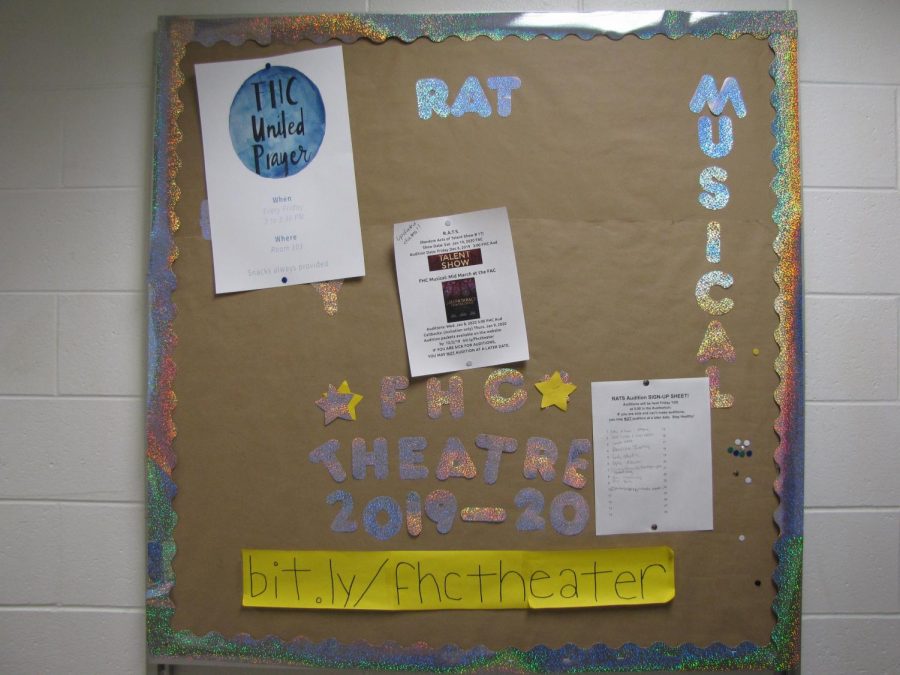 The Random Acts of Talent tryouts are tonight; if you can sing, do stand up, or just about anything in between you better be there.

Random Acts of Talent is an FHC tradition that first took place seventeen years ago and has been a hit ever since.

According to the head of the theatre program Robbin Demeester, it’s a place for students who may not normally have a chance to show people who they are and to prove that they are somebody who needs to shine.

“I started the show seventeen years ago when I just decided that there were a lot of kids who may audition for plays and or musicals,” Demeester said. “But there was a whole big sector of kids at our school who have talent that never get showcased because they might not be [into] theatre or something, but they might have a cool talent that people need to see. That’s why I call it ‘Random Acts of Talent’ because even if they do something super weird or different, that talent could be showcased in this type of show.”

Musician and veteran R.A.T performer junior Katie Ritzema is the perfect candidate for R.A.T because, while she has mastered the art of performing musical instruments, she does not exceed in theatre.

“I can’t sing, dance, or act or anything like that,” Katie said. “That’s why I like to [do] Random Acts of Talent, because you don’t have to be able to do any of those things. It’s just a really great place to show off what you can do and what you’re good at. I think that’s why so many people have such a fun time with it and why I really love it.”

Whether students are a musician like Katie, or something completely different, this is the perfect time for students to come and show the school what they can do, and Demeester believes there is more hidden talent in even just one classroom than many of us realize.

The tryout process is one that is fun, easy, and simple. It’s held in the auditorium and is open to all. Students should have an act of some sort prepared, but there are rehearsals to perfect their performance for the big reveal. Once people are there, students will volunteer to go or Demeester will pick, and students just get on stage and give it all they’ve got.

“When kids come to me at auditions, they have a pretty good act already,” Demeester said. “I am just meeting with them in December and January to make sure that their acts are getting perfected to put in front of 800 people or so, because these are people like parents and siblings and also just other students who are paying money and taking time to come and see our show. I want to give them their money’s worth, and I feel that we always do.”

Over the years, there have been so many different talents. Some people are made for the stage, and their confidence really shows when they are up there. That’s what makes certain performances stand out over the years.

However, there are so many people behind the scenes who tirelessly work to make R.A.T. the hit that it is. A lot of the organization and communication, which is a vital part in order for the showcase to run as smoothly as possible, is done by student director senior Sarah Buchanan.

“I am the student director for the whole theatre season, including R.A.T, and basically I am in charge of a lot of the student-run things throughout the show,” Sarah said. “For example, I do a lot of communication with all the people involved and a lot of organization of different rehearsals, running them and just being the student leader of the whole thing. But it’s fun, and I always manage the responsibilities.”

With all the outstanding work that is put into the show, students feel pumped to tryout and be a part of something many think is spectacular.

“Out of all the performances I take part in, this is my favorite,” Demeester said, “because I think it really embodies what our school is all about.”