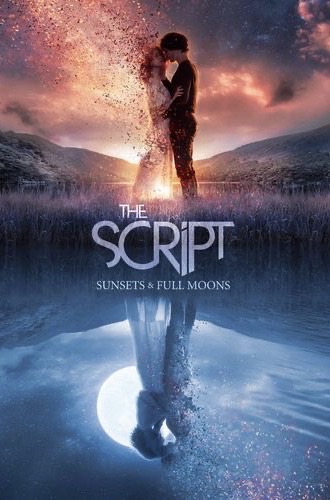 I do not like to switch up my music.

I listen to the same songs over and over again. Some even say that I have horrible music taste, but I know what I like. That being said it was very hard to find an album or EP to review. And when I need help trying to find something, I turn to Google.

I googled albums that were released in 2019 and found a Wikipedia page—I know, never trust Wikipedia. I was desperate so I opened the website, looking for an album that was released in November. Looking through the titles, nothing called to me until I saw the album called Sunsets and Full Moons by The Script. I had never seen a name like that so of course I had to give it a listen.

The first song is called “Something Unreal.” The song’s beat starts out with a piano and then later merges with strings creating a beautiful, upbeat melody as lead singer Danny O’Donoghue sings the heart-rending lyrics to the very happy rhythm of the song. This was a weird combination, but overall I enjoyed this song.

The second song is called “The Last Time.” Similar to “Something Unreal,” this is also a sad song matched with a rock beat, granted this is a rock band. It starts with a guitar and piano, adding in the drums later during the lyrics leading to the main chorus. This is a sad love song all about how they thought their relationship would last a long time, but as time took its toll, they grew apart, and they can no longer be together. The lyrics are a bit cliche, but I liked the beat of the song.

The third song is titled “Run Through Walls.” This song is a slower song all about friendships and that friends—real friends—will always be there for you. A friend will know you better then you know yourself. They love you and will help you through anything.

Number four is called “If You Don’t Love Yourself.” This one is about self-love. It has a soft drum beat accompanied by an acoustic guitar and piano. Their lyrics hit me extremely close to home. They ask a simple, but a deep question.

“How can you love if you don’t love yourself?”

This question is repeated time and time again throughout the song. It was never answered. Instead, it was followed by a statement: “if you don’t love yourself you can love no one else.” This was by far my favorite song of the whole album.

The fifth song is called “Hurt People Hurt People,” and just like “If You Don’t Love Yourself,” it starts with an acoustic melody. As the title hints, this song is about how hurt people hurt other people, whether it is on purpose or not. The beat and flow of the lyrics are very similar to the other four songs.

The sixth song is called “Same Time.” This is another slow but also upbeat love song, one that you would probably hear at a wedding. It is extremely repetitive, and I did not enjoy this song.

The seventh song is named “Underdog.” Unlike the previous songs, this song did not have an intro melody. It started right away with very powerful lyrics accompanied only with a piano. This is my second favorite of the nine. It goes into a more EDM type of beat once it gets to the main chorus and is unique from the others. My favorite lyrics from the song is “I’m gonna prove the whole world wrong tonight/ this is for the underdog.” It’s all about fighting and never giving up, and I love the message it gives.

Number eight is called “The Hurt Game.” As the title reveals this is another song about hurting. The beat is back to the acoustic and piano melody—another sad song with an upbeat tone. By this point, I was just annoyed that there was rarely a diverse song in this nine-song album.

The final song is called “Hot Summer Nights.”  It starts with—guess what? Another acoustic guitar beat. It is another sad love song where the singer knows he is going to break up with the person, and yet, he still gets together with them and then must go through the pain afterward.

In conclusion, all these songs were alright alone, but when they were put in an album together, they brought a wave of boredom with nothing but the same beat for seventy-five percent of the songs.