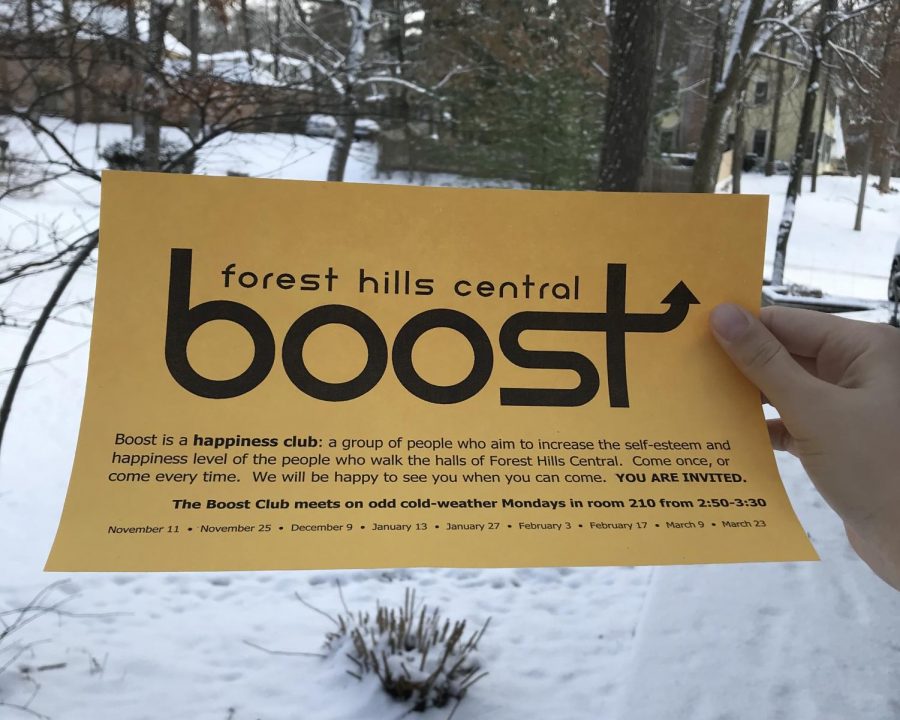 Math teacher Tracy Will’s everyday goal is to boost the self-esteem and happiness levels of the people who walk the halls of FHC, and she is not alone. Others who have this same mindset have formed a welcoming, positive group: Boost Club

Will currently supervises the meetings of the club, and she conceived and executed the idea five years ago.

“The club started because I wanted [to create] a place for kids who kind of like student-council-type things,” Will said. “[It’s meant for students who] didn’t run for student council to have an outlet for the positive impact they hoped to have on the school.”

This impact is what the meetings that occur on every odd, cold-weather Monday focus on. Meetings are typically 45 minutes; this time is either spent planning ideas or putting them in motion.

“We do something around the school to make the experience for a few kids different than it was the day before,” Will said. “Maybe we’ll hang up a sign with a positive quote, organize handing out cinnamon gum in our first hours the next day, or hang rip-off-able positive messages on the walls—just something that might make the day better for someone in our midst.”

This is the ultimate goal of the club: to make someone’s day a little better.

However, the positive impact isn’t exclusively for people on the receiving end of these acts; Will finds herself happier and notices a difference in members of the club after they participate.

Even though the Boost club has just started up this year, students are excited for its return.

Although the club was not able to meet last year, long-term attendees made plans for this year. Senior Lindsey Cool is one of these returning members. She has been involved since eighth grade and found a community inside Boost.

“I enjoy attending meetings because I always walk away in a better mood,” Lindsey said. “No matter what kind of day I’m having, being around other people who share the common goal of boosting happiness brightens any rough spots. It’s also really cool to have the opportunity to make a difference in another student’s day, even in the smallest way.”

Lindsey loves to see the impact she can have on people, especially the people that don’t attend the club. She “[doesn’t] think it’s possible to walk out of that room without a positive attitude.” Because of this passion for kindness, first-time students are warmly welcomed and swayed to come again.

Freshman Summer Wu is one of these students. She attended her first meeting this year and plans to continue.

“I have enjoyed it a lot so far,” Summer said. “I like the feeling of contributing to the school and the feeling of just spending time after school doing things that are purely pleasant and not stressful or anything negative. It’s overall a casual, more laidback type of afterschool club, and it’s nice to just be involved.”

While the previous meeting was Summer’s first, the meeting on December ninth was sophomore Eli Luyckx’s first.

The yellow posters hung up around the school caught his eye, but he dismissed them at first. Then, following a friend’s recommendation, he paid them more detail.

“What made me make up my mind [to come] is that I’ve been going through some really rough times, and I still am,” Eli said. “I feel stuck. I tend to attach to negative feelings, and the thought of being around a positive environment is all that I can really do [to help myself].”

Eli isn’t the only student faced with these feelings, and this is the primary task of the Boost Club: to make the rough patches of life a little smoother.

He is looking forward to the next meeting, and Will is always encouraging more people to come.

Eli had Will as a teacher last year and can attest to her kind spirit and consistent words of encouragement. Eli felt that he could be himself in her class and thought that the same feeling would translate to the Boost Club.

“I feel like it should give me something to cope with and help me raise my self-esteem,” Eli said. “I liked having her as a teacher last year; I wish I still had her because it was the class I felt like I could be me and feel happy.”

Kindness is something important to Will inside and outside her classroom; Eli is just one recipient of this joy.

The members of the Boost Club attend to boost their own self-esteem and happiness levels, while also improving the lives of other people who walk the halls. From 2:50 to 3:30 on odd Mondays, these students are working on ways to improve the morale of FHC, and they hope that they are able to make even just one student’s day a little bit better.

“The secret way to boost your own happiness is to do something nice for someone else,” Will said. “[It’s] even better if the person who benefitted from your actions didn’t know it was you. You’ll have a tiny bluebird of happiness in your heart every time you think of how happy your actions made others.”