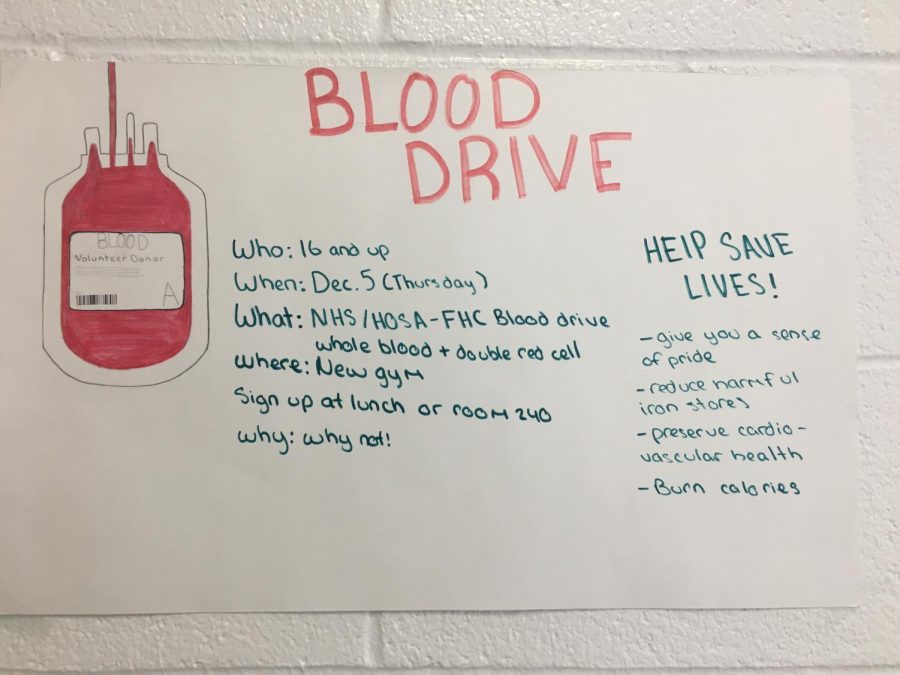 Seated in a makeshift cubicle in the main gym, junior Koyuki Buckhold was handed a bag of pretzels and a full water bottle and was given one instruction: to eat every pretzel and drink the entire water bottle.

Having just gotten her finger pricked after filling out an extensive questionnaire, Koyuki begrudgingly chugged the water bottle, but understood that it is what she signed up for when writing her name down for the annual blood drive a couple of weeks ago.

Sponsored by NHS, the blood drive was heavily advertised by board members in the weeks leading up to Thursday, Dec. 5, the date of the annual blood drive, and the day where Koyuki had to chug an entire bottle of water before donating her blood.

Koyuki was no stranger to the routine of donating, but for those who have never donated before, the unfamiliarity of the event can be off-putting, shying them away from a unique experience during the school day—an experience that, ultimately, saves lives.

For NHS board member senior Nicole Aquino, that is the most difficult aspect of the blood drive: encouraging students who may not be educated about the cause of the event, or the effects, to allow volunteer nurses to prick their finger, force them to drink an entire bottle of water, and to stick a needle in their arm for five minutes or longer.

Nicole defaults to one single slogan when advertising the blood drive, a simple phrase that rings true and is a significant motivator for students: ‘donating blood saves three lives.’

“Getting students interested] is the hardest part,” Nicole said. “It takes a good week, week and a half. [The slogan] is what I default to [when advertising the blood drive]. It’s a really good cause, you know, why not? Just go for it.”

Senior Anabel Varghese, NHS board member and blood drive coordinator along with Nicole, set expectations high for participation this year—a hefty goal of fifty participants, which would save at least 150 lives. In order to reach that goal, advertising the event was crucial, and Anabel and the other board members did not shy away from asking every student at the lunch tables if they were eligible and willing to donate.

Along with promoting the event itself, Anabel and the other board members educated students about the impact their small actions could have on multiple lives.

“I [don’t] think people are as educated about how important it can be,” Anabel said. “One donation saves three lives, so that’s pretty big. We really push that, kind of put that in the front of everything we advertise, like, guys, just take thirty minutes—you can do a lot.”

Although initially inspired through word of mouth from a friend, not posters or announcements from NHS members, Koyuki has devoted an hour total of her time to the blood drive, and, consequently, has saved up to six lives while doing so.

And while those facets alone have inspired Koyuki to continue donating, the recent discovery that her blood type is O—the universal blood type—influences her continual decision to donate.

Not everyone is eligible to donate, though, which is kept into consideration when advertising the event and creating goals. Nicole herself has never been able to donate due to illness, which she stated to be incredibly ironic, but as one of the crucial coordinators of the event itself, there is plenty of behind-the-scenes work to be completed.

On the actual day of the blood drive, Nicole frequently visited the gym to ensure every part of the event was running smoothly—that the student and nurse volunteers were working together seamlessly, that the students who were donating were safe and comfortable, and that the weeks of planning, advertising, and coordinating were able to flourish to fruition.

According to Anabel, the blood drive would not have been as successful as it was without the nurses, with whom she spent a considerable amount of time with and is especially thankful for.

“The nurses make up a lot of the experience,” said Anabel, who was just eligible this year. “They are really soothing and are there every step of the way. They draw smiley faces on our bandaids after we’re done, and are just really nice and really helpful.”

As a first-year donator, along with many other students, Anabel experienced her share of anxiety, but she credits her smooth, easy donation to her amiable nurse who distracted Anabel from the needle in her arm and maintained her friendly focus throughout the thirty minutes.

Although the goal of fifty participants was not met for this blood drive, the event was a success, nevertheless. Twenty-two students devoted their time to save up to sixty-six lives, and the event itself ran safely and smoothly. Students like Koyuki, who have made the decision to donate and continue to make that decision, and Anabel, a first-time donator who had outstanding nurses that made the experience less nerve-wracking, allowed the event that Nicole and the other board members coordinated so tirelessly to flourish.

Anabel looks back on her first experience fondly, and both her and Nicole can only hope that the next blood drive, which is in the spring, will be as successful as the previous.

“To me, [donating] is nothing personal, but I just think it’s important to do,” Anabel said. “It’s a simple way of saving lives.”