Hockey climbs back to .500 with two wins on east side of the state 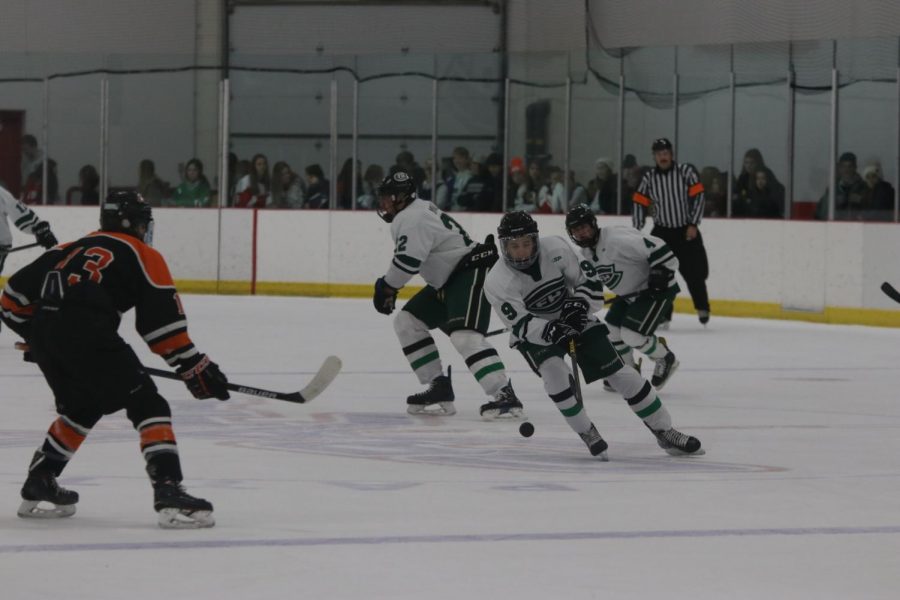 Coming off a demoralizing loss to Jenison—a team the Rangers expected to beat—FHC traveled to the east side of the state to take on Walled Lake Northern and St. Frances (Allen Park) Cabrini in hopes of righting the ship before facing a couple of conference opponents this coming weekend.

In both games this weekend, the Rangers fell to 1-0 deficits almost immediately. The Knights of Walled Lake Northern started things off, but FHC scored seven unanswered goals throughout the remainder of the game as the Rangers utterly dominated their opponent. The initial jump took place in the second period when the Rangers scored four goals to the Knights’ one. FHC var

Junior Mason Kelly led the charge for the team offensively with 4 points, including two goals and two assists. Other key contributors were senior Cole Munger and freshman Sammy Mielock, who each recorded 3 points. Cole scored two goals and assisted one, while Sammy scored one and assisted two.

Other goal scorers on the night were senior Ryan Jeffreys and sophomore Josh Smith, who each recorded one apiece. Sophomore Lucas Jeffreys, junior Xavier Ott, and Ryan all recorded one assist, and the distribution of offensive contribution was very impressive as many players got involved. Junior Gavin Brady took care of in between the pipes for Friday’s contest, saving 20 of the Knights’ 21 shots, and the Ranger defense dominated after the initial goal.

Just like in Friday’s game, senior Cole Munger and junior Mason Kelly scored two goals each to propel the Rangers to another seven-goal performance. Also similar to Friday was the start of the game as Saturday’s opponent—the St. Frances Cabrini Monarchs—scored the first goal of the contest. After being tied 1-1 after the opening period, the Rangers won both of the next two periods 3-1 to bring the game to a final score of 7-3.

While four of the goals came from prominent sources, the other three goals came from junior Jacob Campbell and senior Grant Cardin, with two of them coming from Jacob. Assists wise, the stats were very spread out, with 12 different players recording an assist. Ryan, Xavier, Sammy, and senior Hayden Sarjeant all had two assists apiece. Defensively, the Rangers gave up one or two more goals than they would’ve liked to, but sophomore Jake Munger successfully saved 19 of Cabrini’s 22 shots on the night.

With these wins, the Rangers advance to 3-3 overall on the season, still sitting at a 1-0 record in the conference after the two non-conference games. This coming weekend, FHC will look to capitalize off the momentum with two conference wins over East Kentwood and Lowell/Caledonia.