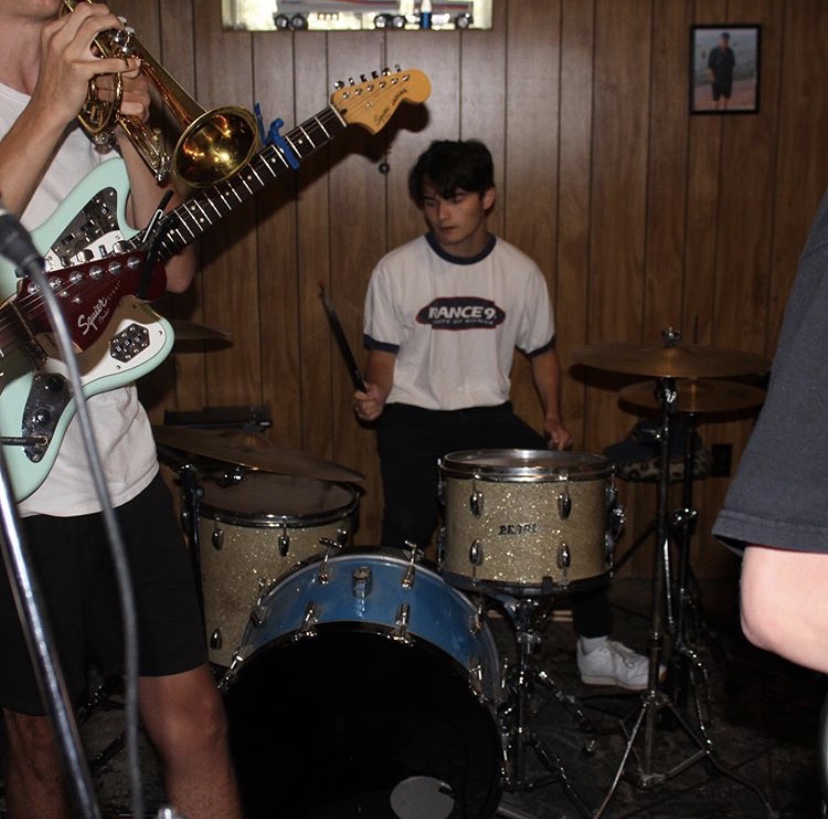 Similar to Thom Loos, Jake Domeier’s introduction to Pay with Pesos is also one of chance. After crossing paths with Henry Lovejoy Vandenburg at a party, he was asked if he would be interested in joining the band, and, of course, his answer was yes. From the first moment that he became acquainted with the other members, Henry says that they all “bonded immediately.”

Now, roughly a year later, Jake (a senior at West Catholic) has contributed to many crucial aspects of Pay with Pesos. According to Henry and the other members of the band, Jake’s role is significant for “keeping time” for the band and the way that he and Thom “establish a groove to [their] music.”

“Since we started playing with [Jake], our growth has been huge,” his fellow bandmates said. “[He] offers [us] a place to rehearse, and [it’s beneficial] to have him record different parts [too]. [Overall], he has really added a lot to this band.”

In terms of what Jake feels he wants to bring to the band, he looks to his inspiration in My Bloody Valentine and Pavement because of their “uniqueness” and states that, “that’s what [he] strives to be through music.” As far as his own personal history with music, and the drums specifically, it seems to stem from familial roots, and he states that his father is the one who inspired him to start and continue playing.

“I started playing [the drums] when I was five because my dad is a musician and taught me how to play,” Jake said. “I still play them [now] because it puts me in a trance almost. It’s [like I’m] literally being a part of everything in music, and I love that [feeling].”

When asked about the best part about being in Pay with Pesos, Jake’s answer is not unlike that of his bandmates. Their connection and appreciation for each other all stem from one common feeling: family.

“[Being in Pay with Pesos] is like having four other brothers,” Jake said. “I love them like family. [The process of] exchanging ideas is [another] best part. [In the future], I hope to be with these guys for as long as possible. [I want to] make new stuff every moment [that] we can.”