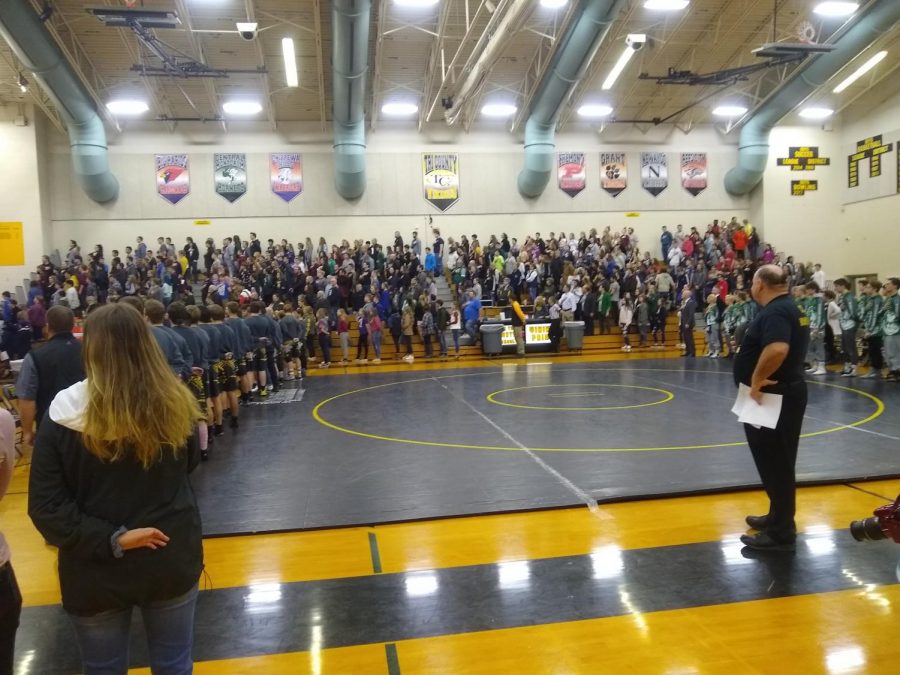 Tri-County High School hosted the Rangers the other day at its assembly match. FHC has been in contact with the Vikings for the last 6 months trying to plan an in-school assembly wrestling meet, and the day finally came. The Rangers came out on top in this match, with a final score of 36-31.

Junior Isaac Gurley opened up for the Rangers and won a monster match at 145, giving them the early adrenaline boost and energizing the upcoming wrestlers. Shortly after, senior Wyatt Engler wrestled his state-ranked opponent in a thriller of a match at 171. Down 7-3 with little time left, Wyatt knew he had to do something to turn this match around. His opponent, Caleb Mulnix, went to end the match by throwing him, but Wyatt had another plan; he stiffened out and turned it around and set Caleb on his back, forcing the match into overtime, which Wyatt later won.

“[Wyatt’s match] was the most exciting match of the whole event between two veteran wrestlers,” Coach Brad Anderson said. “Wyatt gutted out the victory with sheer will and gave us a key win today.”

Juniors Mason Childers, Bryce Hysong and Mason Corcoran all pinned their opponents, giving the Rangers 6 points each. Juniors Caden Jacobs and Cam Roth also won their matches 7-4 and 14-0, respectively, which gave the Rangers another boost of energy leading into their later matches.

Senior Hannah Becker wrestled and pinned #2 ranked Lexi Porter in the third period, stunning the Tri-County student section. Hannah started out this season right, despite an injury to her ribs pre-season.

After the Tri-county matches, the Rangers took on Lakeview, whom they defeated 56-18. After a highly intensive couple of matches, FHC rallied together to win against both of their opponents and shocking the entire gym.