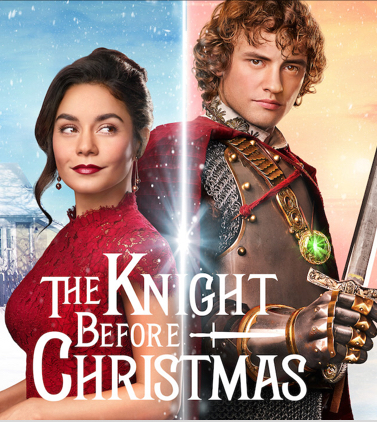 The plot twist—if you can even call it that—you can see coming from the beginning of the movie. The unrealistic story-line and the too-perfect lives these characters live are just a few of the reasons I don’t get a kick out of cheesy, overdramatic Christmas movies.

The Knight Before Christmas was no exception.

I grew up watching Vanessa Hudgens. I watched her sing and dance her way across the TV in Disney’s High School Musical in her role of Gabriella Montez while I sat in my fuzzy pajamas every Saturday morning eating breakfast and drinking chocolate milk. As I transitioned from a young child into a young adult, Hudgens transitioned into more adult roles. So to say I had high expectations was an understatement.

The movie opened in Norwich during the December of 1334. The camera panned down to show a medieval castle square. It had bustling villagers and showed a hawk hunt that was about to take place. As soon as the hawk is released, the knights—one being Sir Cole Christopher of Norwich played by Josh Whitehouse—take off. After that, the camera immediately changes scenes to show Hudgens—who plays Brooke—playing a school teacher.

When the film changes to show us the knight in shining armor, once again we are greeted by a cliche, magical witch that sends the knight to complete a quest by midnight on Christmas Eve.

Once he is transported to 2019, the young knight ends up in a small town across the pond called Bracebridge, Ohio. Now, I will give credit where credit is due. Although I think Christmas movies are redundant and repetitive, the way they meet at the beginning of this movie are unconventional and nothing I’ve seen before—Brooke running Cole over with her car wasn’t how I was expecting them to kick off their romance.

In the beginning, Brooke only offers him shelter because she feels guilty for nearly running him over and sending him to the hospital. After a little time, she couldn’t resist his charm and fell for him even though he doesn’t know what radio or airplanes are.

The plot is something I can’t help but feel as if I’ve seen before. She gets cheated on by her ex-boyfriend, then she meets a handsome man who somehow fell into her lap, and finally, they live happily-ever-after.

As the storyline progresses, I can’t help but put my feelings aside and admit that they cast this movie perfectly. Hudgens fits her role as a kind-hearted school teacher well, and, although I’m not familiar with Whitehouse, I thought his take on the goofy role was perfect.

Most girls wish for a prince charming who owns a castle in some far off land, but not Brooke. Instead of finding a gorgeous prince, a goofy knight from Norwich lands in her lap, or, should I say, she almost runs him over with her “trusty steed”, as he likes to call it.

In an attempt to not spoil the rest, I won’t reveal what happens in the end, but if you know anything about cliche Christmas movies, then the answer is pretty easy to guess.