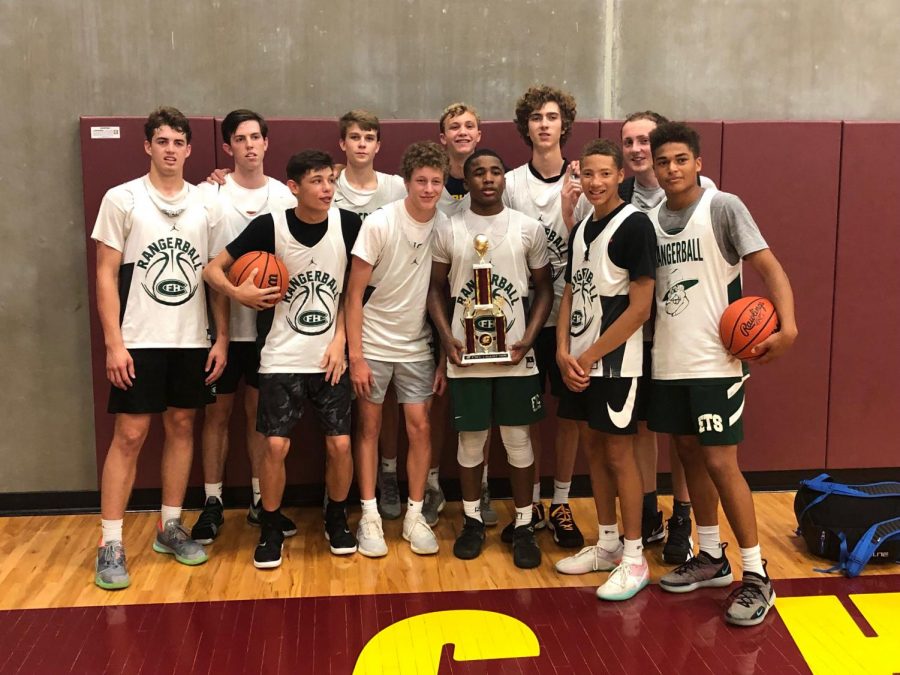 Coming off of a 12-8 season last year, the boys varsity basketball team looks to improve this season through the experience of returning players and second-year head coach Kyle Carhart. After a strong senior class highlighted by players such as Daniel Deindorfer and Tate Hallock graduated, the team will have to grow quickly. The team experienced successes last year such as winning the Holiday Tournament at Cornerstone before ultimately falling to Forest Hills Northern to end the Rangers’ season in Districts.

“We have to be extremely prepared for every game. FHC has built up a reputation as a good basketball school as a result of the success of Coach George. We can’t afford to not be at our best,” said Carhart. This is what he has learned through one year of coaching the team, and he hopes to instill this mentality into the players this season.

This experience stems from the varsity veterans: seniors Jimmy Scholler, Mitchell Wilkinson, Jay Wiener, and Tommy Spaletto, along with junior Jacob Ervin, the only sophomore who played on varsity last year. Jimmy and Mitchell look to become leaders on the team this year after receiving substantial minutes last year and turning those opportunities into stellar performances.

“Last season, I had 13 assists against Cedar Springs, which was a school record. I was very happy that I could celebrate with my teammates as they were the reason I got it,” Jimmy said.

Jay, Tommy, and Jacob will also be given more chances this year to step up and make a difference.

New players also looking to make a difference on the team this year include juniors Chris Battiste, Peyton Bush, and Jonah Spates. Chris and Peyton look to boost the offensive scoring efforts for the team, and Jonah is known to be a lockdown guard on defense. The new players to varsity this year have started to play well with the players who are returning this year.

“I’m excited to play with this year’s team as I feel we are very deep and have a bunch of good players and athletes,” Jimmy said. “Also, we have good team chemistry.”

These experienced players will have to teach the new juniors throughout the season, and everyone will have to contribute in games against difficult opponents this year, highlighted by Forest Hills Northern, East Kentwood, and Northview. Forest Hills Northern is a game the team especially wants to win. Last year, the boys experienced a tough defeat at the hands of FHN to end their season, so they will be looking to avenge that loss at both of the two meetings they have this season against the Huskies.

Before these midseason tests, however, the team has to focus on the Cornerstone Holiday Tournament. After winning the tournament last year, the boys are eager to return and defend their title. The East Kentwood matchup will also occur early in the season as the team’s encounter with the Falcons will be the home opener in the second week of the season.

The atmosphere surrounding the team is buzzing in hopes for what this season holds.

“We want to be one of the final four teams [in the state] that are playing [at the Breslin Center], so we are improving every day,” said Carhart about the team’s goals for this season. “In the short term, we are looking for success and getting better in practice.”

After winning the conference title for the two years prior to last season, the team has built up a reputation for success, and that’s what everyone expects.

“We hope to win the conference and make a deep run in the playoffs,” junior Dallas Hopson said.

The team will kick off its season this Friday at 7:30 pm at Forest Hills Eastern.

“I had 30 points against Eastern [last year], but the best part was coming back and beating them,” Jimmy said.

The boys will look to best the Hawks again in this year’s season opener and set the tone for a season full of high expectations.