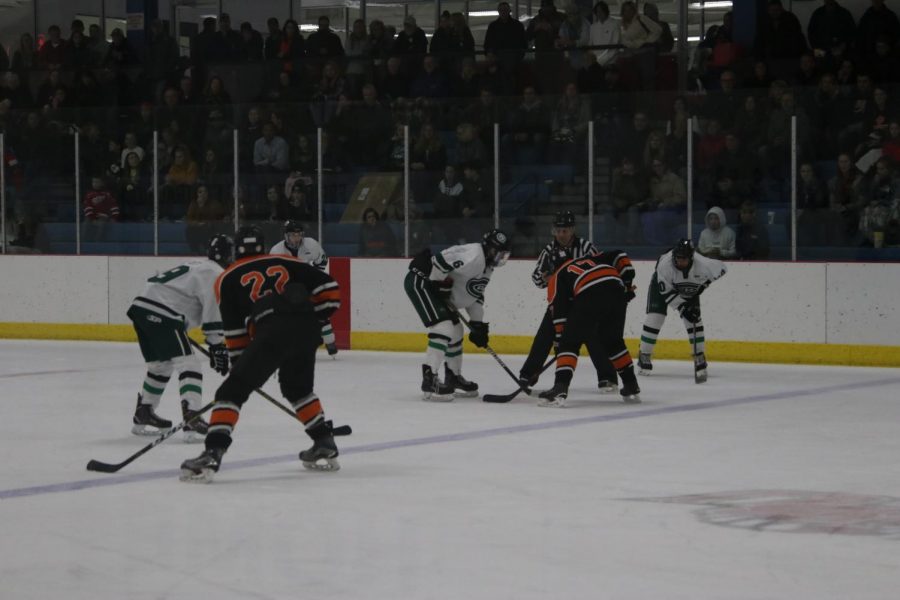 Junior Mason Kelly hit the back of the net five times on Saturday night en route to a 7-1 victory over Lowell/Caledonia. Mason has been an integral piece of the team once again this year, scoring 13 goals and recording 6 goals so far. This success continued this weekend despite him not scoring in Friday’s contest.

Following two seven-goal offensive performances on the east side of the state the weekend prior, the hockey team picked up two conference wins in two more high-scoring affairs. Against East Kentwood and Lowell/Caledonia, the Rangers won by impressive scorelines of 8-0 and 7-1, running away with the game in the first period in both contests.

Facing East Kentwood on Friday, the game was highlighted by utter dominance on both sides of the ice. The net was manned by both goalies in sophomore Jake Munger and junior Gavin Brady, with Gavin taking control for two of the three periods. They made a combined 18 saves and recorded a joint-shutout.

Six different goalscorers found the back of the net for the Rangers, with returning star forwards seniors Peter Bardelli and Cole Beaufait scoring two apiece. Other than those two, goals came from someone in each grade represented on the team; freshman Sammy Mielock, sophomore Josh Smith, junior Jack Fitzgibbon, and senior Grant Cardin all scored for FHC. Jack’s goal was the first of his high school career, and it brought the Ranger lead to 6-0.

The day after the 8-0 win over East Kentwood, the Rangers secured another dominating win, this time against the combined Lowell/Caledonia team. Just like Friday night, the Rangers exploded for four goals in the first period. Goals by Mason and senior Ryan Jeffreys brought the FHC lead to 2-0 before Lowell/Cal got one back to make it 2-1 with 13 minutes left in the first.

After that, the Ranger offense—and defense, for that matter—didn’t look back. FHC scored five unanswered goals throughout the remaining 47 minutes, with Mason and fellow junior Jacob Campbell scoring to bring the lead to 4-1 at the end of the first period. Mason then scored the remaining three goals to give FHC the final score of 7-1 and his final goal total to five for the night. While Cole didn’t reach the goal total he had on Friday, he recorded a whopping five assists against Lowell/Caledonia.

With these two wins, the Rangers advance to 5-3 on the season with a 3-0 record in the conference. Next weekend, the boys will take on two more teams from the east side of the state as they travel once again, with this weekend’s opponents being Birmingham United and Northville.