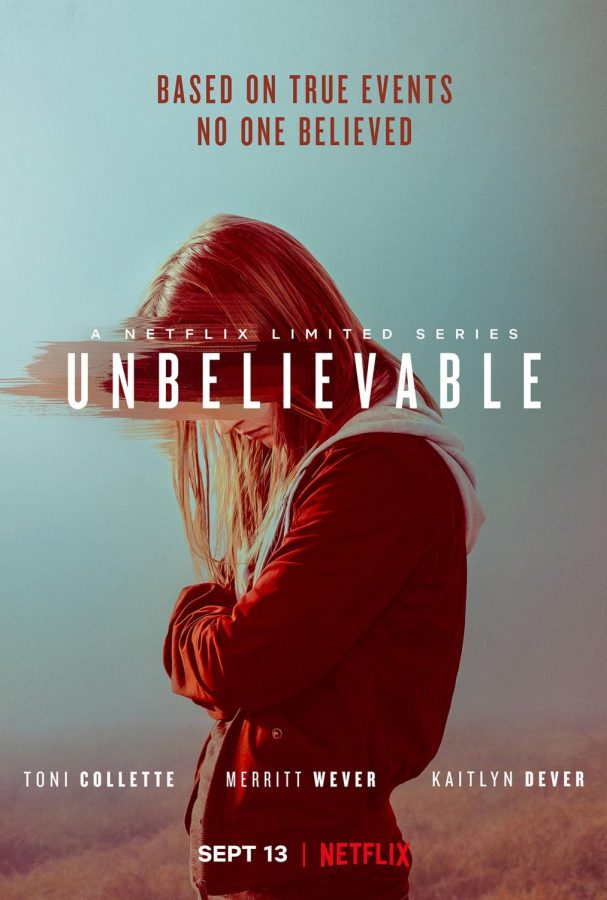 Based on an article published in 2015, “An Unbelievable Story of Rape,” which covered a series of rapes in Washington and Colorado—one focal victim being Marie Adler—eight-episode Netflix series, Unbelievable, sensitively retells those recounts of rape.

Beginning in Lynnwood, Washington, 2008, the first episode of this limited series shines a spotlight on Marie Adler (Kaitlyn Dever), a young woman who has spent her entire life in the foster system. She tells police that, while she was sleeping, her apartment was broken into and the masked intruder held her at knife-point and raped her for hours, threatening to kill her if she released the pictures he took of her. In the hours immediately following her attack, she reports it to the police, who are immediately skeptical of her story.

The strident detectives immediately pry harshly, growing increasingly skeptical as Marie, shaken and vulnerable, grasps at the fuzzy details of her attack. The nurses, who examine and intrude upon Marie and her body, lack the empathy and understanding that she so desperately needs.

Marie has nobody in her corner: she, a rape victim, is outcasted and ostracized by law enforcement.

Episode two, while still following Marie’s case and the negligence and injustice that accompanies it, fast forwards three years and down to Colorado, where a soft-spoken detective follows a strikingly similar case, unbeknownst to her. Amber (Danielle Macdonald), whose story is oddly alike to Marie’s, shares her story in the hours following her rape to Detective Karen Duvall (Merritt Weaver).

Feeling understood and supported, Amber is reassured by the empathetic Duvall that there are paramedics to treat her if she is ready and that there are shoulders to lean and cry on.

Nobody is skeptical of her story. Amber has support: she, a rape victim, is heard, seen, and trusted.

As the episodes continue, an experienced detective enters the picture with a rape case of her own, which, you guessed it, bears a striking resemblance to the other cases. These three stories intertwine, and Detective Duvall eventually crosses paths with Detective Grace Rasmussen (Toni Collette), a brilliant woman whose intellect and experience is unmatched.

With three years, drastically different detectives, and state lines separating these cases, one element remains constant: the subtle feminist undertones and the grace and sensitivity surrounding the subject of sexual assault.

Although there was a content warning before the first episode began, there were no graphic images of the assault, which was the most beautiful aspect of the series. Discussed and depicted with eloquence and grace, any split-second image of the attacks was from each victims’ point of view, showcasing how each survivor perceived and processed their attack differently.

The central focus of the series was Marie Adler, whose story was always circled back to when there was a break in Duvall or Rasmussen’s case—which happened three years after Marie’s. What neither Duvall nor Rasmussen didn’t know, though, was that Marie’s case was a thread in their ever-growing web of stories, suspects, and evidence.

Neither of them had any idea Marie even existed. But she did. She was a victim experiencing dramatically different treatment from her detectives. Forced to lie, forced to go to trial and plead guilty for “falsely reporting,” losing her job, her friends, her housing, her sanity, and, nearly, her life—Marie existed, and she was a crucial component of the story.

The series wasn’t a story about the intense road to finally catching the suspect. It wasn’t about the perpetrator, or why he did the things he did, or why he acted the way he did.

It is about survivors and surviving. It was about the unreasonable doubt placed upon strong women who share their stories, and it was about the acts of understanding and kindness from the equally as strong detectives involved in the case that lead the survivors to some measure of peace.

It is a series for those women—the women who faced their attacker in the courtroom and asked him, “why me?” The women who persevered through adversity, through the ignorance of people who refuse to believe, through their darkest days in a world where their word is not heard.

Unbelievable is a series about women rape victims and their stories, their survival, and their strength.