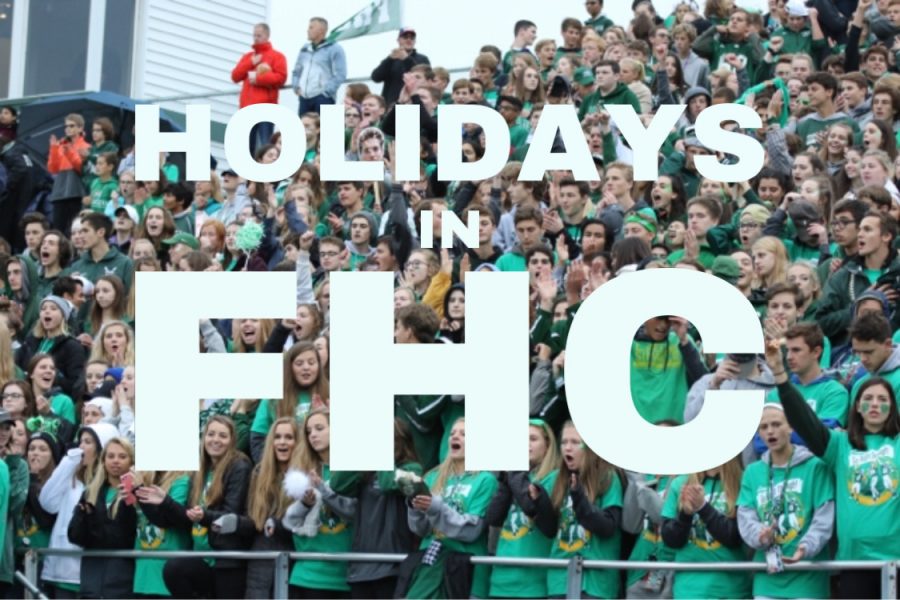 At this time of year, there are all different types of holidays being celebrated, even holidays that some people don’t even know are occurring. Within FHC,  there are miscellaneous holidays that students, as well as staff, are celebrating. Among these celebrators is Media Communications and FX teacher Jeff Manders.

“I celebrate the holiday Festivus at this time of year,” Manders said. “It is normally celebrated on the 23rd of December and is mainly meant as an alternative to the pressures and commercialization of the Christmas season.”

Festivus, along with standing as an alternative to certain aspects of Christmas, is a celebration of the ever-lasting 1990s comedy television show Seinfeld.

Seinfeld is a show focused on the life of Jerry Seinfeld and his friends and acquaintances; basically, it is a comedy show zoomed in on the minutiae of everyday life. Festivus was actually a holiday that was celebrated in an episode of the show, hence the connection between the holiday and the show.

And, as with any holiday, there are traditions that go along with Festivus, most of which come from the Seinfeld episode.

“The traditions that go with Festivus are the Festivus Pole, the Airing of Grievances, Festivus dinner, the Feats of Strength,” Manders said. “Personally, I usually show part of the Seinfeld episode to my classes before we leave for the holiday break, and I have a Festivus Pole prominently displayed in my classroom.”

The Airing of Grievances is an opportunity to share with others how they have disappointed you in the past year and is followed by the Festivus dinner, which included meatloaf in the Seinfeld episode. This holiday is then completed by the “Feats of Strength” in which the head of the household must be wrestled and pinned.

Among these traditions, Manders has a favorite.

Essentially, the holiday of Festivus comes from a show. The episode, “The Strike,” of Seinfeld contains everything you would need to know about the holiday…”

“The Airing of Grievances is my favorite part of Festivus,” Manders said. “It’s good to get that stuff off your chest before the end of the year.”

The episode, “The Strike,” of Seinfeld contains everything you would need to know about the holiday, and it is one that Manders enjoys watching and celebrating at this time of year.

Following along the lines of different celebrations, senior Kai’Enna Tucker celebrates a holiday that many people don’t even know about: Winter Solstice.

“I grew up an atheist, so I didn’t really celebrate Christmas as a kid,” Kai’Enna said. “Although I knew what Christmas was, I didn’t know why people celebrated it; I didn’t even know who Santa was until third grade. Instead, my family and I celebrate Winter Solstice.”

Winter Solstice is the day of the year with the shortest period of daylight and the longest period of nighttime. It occurs on December 21st each year, and that is the day that Kai’Enna celebrates with her family.

While the holiday can come with a variety of traditions and celebrations, Kai’Enna’s family celebrates it in similar ways to Christmas.

“We do a lot of the same things people do on Christmas,” Kai’Enna said. “We do things like open presents under the tree and whatnot. And, I always thought it was cool that I got my presents before all of the other kids.”

Winter Solstice is actually the day of the year with the shortest period of daylight and the longest period of nighttime. It occurs on December 21st each year.”

A big part of the celebration of the Winter Solstice for Kai’Enna comes from her parents. While their beliefs restricted them from truly celebrating Christmas, they still wanted something for their children to celebrate.

“I think my parents had us celebrate on Winter Solstice so that we wouldn’t miss out on what other kids got to experience,” Kai’Enna said. “I don’t really care about the presents, I’m just very appreciative of my parents doing all they could to make us feel normal.”

Several of the holidays celebrated this time of year have religious ties; however, not all people have a religion. So, Winter Solstice is an alternative that allows people to still celebrate something, regardless of their beliefs.

And of course, this time of year is still considered holiday season no matter what you celebrate, and Kai’Enna appreciates the atmosphere that this season brings.

“My favorite part about the holiday season is appreciating those around you more than you typically might,” Kai’Enna said.

While lots of holidays around this time of year are designated to a single day, there are also holidays that stretch over an extended period of time.

“My family has celebrated Hanukkah since I was little,” Brandon said. “It is one of the many celebrations that come along with the Jewish religion.”

This year, Hanukkah will be celebrated on December 22nd through December 30th. Each of the eight days of celebration has different purposes as well as corresponding candles on a special menorah. On each night of Hanukkah, a new candle upon the menorah is lit. There is also a spot for a ninth candle on the menorah, known as the shamash, which must be on a different elevation than the others. The shamash is used to light the other eight candles, four on each side of it.

“My brother and I started learning about the purpose of Hanukkah at a young age,” Brandon said. “I feel like, when compared to other holidays, Hanukkah is a lot longer and more complex.”

Hanukkah is based on the Hebrew calendar, so it tends to fall on different days of the year. The holiday is based on the story of the miracle which occurred after the liberation of the Temple in Jerusalem during the Maccabean revolt. There was only enough oil to light the lamp, or menorah, for one day; however, it miraculously burned for eight straight days.

Overall, the Jewish holiday of Hanukkah lasts eight days to remember and celebrate the miracle of the one cruse of oil which lasted an entire eight days.”

So, the Jewish holiday of Hanukkah lasts eight days to remember and celebrate the miracle of the one cruse of oil which lasted an entire eight days. However, there are still other traditions other than lighting the menorah that come with this holiday.

“There is also the tradition of ‘spinning the dreidel’  after lighting the candles on the menorah,” Brandon said. “That used to be one of my favorite parts of the holiday when I was younger.”

The dreidel is a four-sided spinning top that people play with during Hanukkah. Each side contains a Hebrew letter that abbreviates the statement ‘a great miracle happened there.’

There are also several other celebrations that come along with Hanukkah. These include different types of music, food cooked in oil—hence the oil which burnt the candles for eight days—and Hanukkah gelt, which is the gifting of chocolate coins.

Brandon’s family also has their own traditions they include such as giving and receiving gifts.

“Every year, we invite family over and cook all of the food,” Brandon said. “Then, we have a big dinner, and eventually get presents.”

Hanukkah consists of a series of events, keeping each of the eight days of celebration fun, and Brandon is happy to have the opportunity to celebrate such a unique holiday.

There is a multitude of unmentioned holidays that are celebrated during this time of the year. However, there is one notorious holiday that comes around this year that most people find themselves celebrating: Christmas.

Junior Lilly Vanskiver is a Christmas-celebrator. For her, the preparations for Christmas starts months ahead of time.

“Our whole house is covered in Christmas decorations months in advance for Christmas day,” Lilly said. “We have Christmas lights, two Christmas trees, a nativity scene, bells, and a bunch of other things around our house.”

Christmas, celebrated on the 25th of December, is a holiday dedicated to the birth of Jesus. It is a religious and cultural celebration, usually involving the traditions of decorating a Christmas tree and putting up lights around one’s house.

The story of Christmas comes from Jesus’ birth in Bethlehem. When Joseph and Mary arrived in the city, they were forced to a stable because there was no room in the inn. There in the stable, baby Jesus was born. From this story comes the Christmas tradition of displaying a nativity scene, which depicts this event.

Lilly is able to appreciate both the true purpose and personal purpose of Christmas.

The most important thing about Christmas to me is getting to spend time with my family.”

“The actual point of Christmas, to me, is to be able to spend this holiday with your friends and family while also being able to give back to them and celebrate Jesus and his life and everything he did for us,” Lilly said.

Christmas is a time of year that brings families and friends together. It is a time to reflect and appreciate the people around us.

“The most important thing about Christmas to me is getting to spend time with my family,” Lilly said. “I get to create new memories every single year while giving back to the people I love and being thankful for everything that they have done for me.”

While family plays a prominent role in Christmas, there is also another factor which stands as a very distinguished part of celebrating Christmas: presents.

Along with other traditions, giving and receiving gifts is a big part of the holiday in Lilly’s family.

“We celebrate with just our family in the morning, making breakfast with my mom and then beginning to open gifts,” Lilly said. “Then, we go over to my cousins’ house and celebrate with my aunt, grandma, grandpa, and cousins. I love being able to spend [Christmas] with all of my family members and hanging out with my cousins the whole day while you get and give gifts.”

While Lilly gets to celebrate Christmas with those who she loves, there is also something that makes her Christmas a little more unique: Lilly’s birthday is on Christmas day.

“The nice thing about having your birthday on Christmas is that you get to celebrate with your entire family,” Lilly said. “[My family and I] are always together on the holidays, so I always get to be with them on my birthday as well, which makes it really special.”

As Christmas rolls around this year, Lilly will be happily celebrating with her family and enjoying the holidays as always.

And overall, that is the point of the holiday season. No matter what you celebrate—Kwanzaa, Hanukkah, Winter Solstice, Festivus, Christmas, Three Kings Day, or any of the other various holidays—the holiday season is a time of year where you can come together with your loved ones and just enjoy the time you have with them.

“The most important thing about this time of year in my opinion,” Brandon said, “is that I get to spend time with all of my family and friends. Everyone is always happy, and [the holiday season] just gives us the opportunity to enjoy the people, and things, around us.”