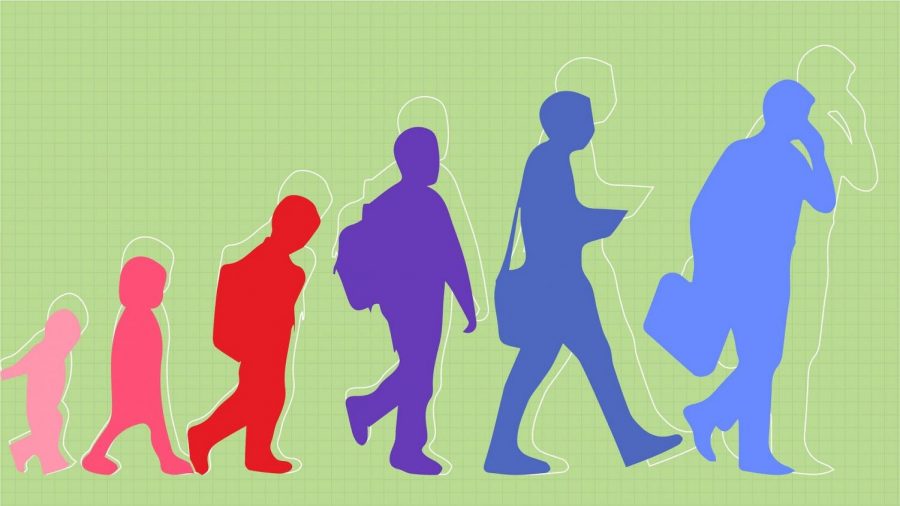 Sophomore Jake Munger has a lot in common with his older brother senior Cole Munger.

Having grown up in the same household, the Mungers share many personality traits and interests. Jake and Cole have taken plenty of the same classes throughout the duration of their schooling, and they’ve had many of the same teachers. The two also play hockey—on the same team.

“It’s fun having my brother on the team,” Jake said, “and it’s helpful that I have someone to talk to; I’m more comfortable. We’re definitely a lot closer because we have something that we can do together now. Also, Cole is very helpful for [me while I’m going through] high school because he kind of taught me what to be like and what classes are like.”

With so much in common, there are some standards for Jake to live up to: expectations set by his parents, teachers, and coaches. As the youngest in his family and the sole sibling to his brother, Jake has a substantial amount of pressure to endure.

“I have a lot higher standards [because of my brother],” Jake said. “[My parents] expect me to achieve higher grades, and I have consequences if those falter. My coaches expect me to bring my all every day because my brother does; I’m expected to be a leader on the team even though I’m an underclassman.”

Although he realizes the weight of the goals other people have set for him, Jake understands that he is better because of them; he uses his brother as an example to set himself up for success and to push himself to be better.

This same situation, despite slight disparities, is recurrent throughout many FHC families. Parents and teachers frequently bestow expectations upon students based on their siblings’ performance in class.

Sophomore Julia Brown, the youngest of four and also a twin, is cognizant of this statement. Julia’s siblings set great examples—along with great expectations.

“My older sister is practically a genius,” Julia said. “I’ve always tried to be as successful as her, which is really hard to do. She’s really hard working. She gives her full effort in anything that she does, so I try to follow suit in that. I definitely push myself to be like her after seeing how successful she’s been.”

Julia’s siblings—two FHC graduates and her twin sophomore Sam Brown—are significant assets to her success in high school. Not only are they role models in her life, but they are also sources of advice and guidance through high school.

Most of Julia’s classes have been taken by her siblings, which is a useful tool that she can utilize often.

“It’s really helpful that [Sam and I] have had the same teachers,” Julia said, “because we can use each other to study or to help with things we don’t understand. I can also ask for help from my older siblings about classes that they’ve taken, which is really nice.”

Like many younger siblings, Julia and Jake have both had the typical struggle on the first day of school. As soon as their names are called out while taking attendance, they hear the too-familiar phrase: “Are you related to…?”

This is the source of the expectations that many students feel they have to reach in order to be successful. When teachers automatically label kids as “the younger sibling of,” it can result in a decrease in interest in the class along with an increase in the student’s stress levels, depending on if they want to shy away from or live up to their sibling’s reputation.

Sometimes, though, those set standards are vital for a student to maintain solid effort throughout the year. The knowledge that a teacher has seen the effort someone’s sibling has put in forces them to work hard in attempts to match—or exceed—expectations.

“There have been a few teachers,” Julia said, “that [my siblings and I] have all had, and they’re like, ‘Oh, so there’s more of you.’ Most of the teachers that I’ve had have been pretty individualistic; they don’t really expect anything of me because of what my siblings have done.”

Spanish teacher Carlos Silvestre is in a constant attempt to stay neutral in his thoughts about siblings. It is a goal of his to keep siblings separated from each other when he meets them; this way, he will make sure that each is their own person.

“I try not to compare siblings because everybody is different,” Silvestre said. “That said, I always have some sort of expectation that siblings that come from the same home will have consistent work ethic generated by the family. Unfortunately, I have come to realize that that’s not always the case. Very rarely do I find consistency in that.”

Expectations are difficult to avoid. For teachers, parents, and siblings alike, standards are made almost automatically—and not always on purpose. Senior Anna Breaugh is coming to realize this more and more as her sister, freshman Katelyn Breaugh, navigates high school behind her.

“I sometimes wish I had someone to pave the way for me or to help me out,” Anna said, “and sometimes it’s hard to do everything for the first time, but it’s also kind of nice. I want [Katelyn] to do the best she can in school and listen to my advice. I’ve been through it, so I know what helps and what doesn’t.”

Anna knows that some unintentional expectations have been set because of what she has done in her life, and, like many older siblings, she sees the positives and negatives of Katelyn following in her path.

“My family is very adamant about [Katelyn and I] just doing our best,” Anna said. “I don’t want Katelyn to do everything that I do because then we wouldn’t be any different. I want her to do her best in school and try new things, but that doesn’t mean she has to do everything I have done. Even if something was amazing for me, it might not work for her. These next four years are for Katelyn to do what she wants. It’s her chance to make her own impression.”

Ultimately, every person is his or her own combination of traits, skills, and goals. Although teachers, parents, and coaches may expect something from students because of their siblings, high school is a time to forge new trails. Finding a comfortable balance between upholding expectations and becoming yourself is key to success. Maintaining a good relationship between siblings despite expectations can be difficult, but in the end, that’s what matters most.

“Sometimes, I wish I didn’t have a brother; he can be a lot,” Jake said. “Most days, I’m glad [Cole] is here, otherwise I’d be very bored. I’ve always looked up to him, and I grew up watching him—I still do. I’ve become a better person because of him.”