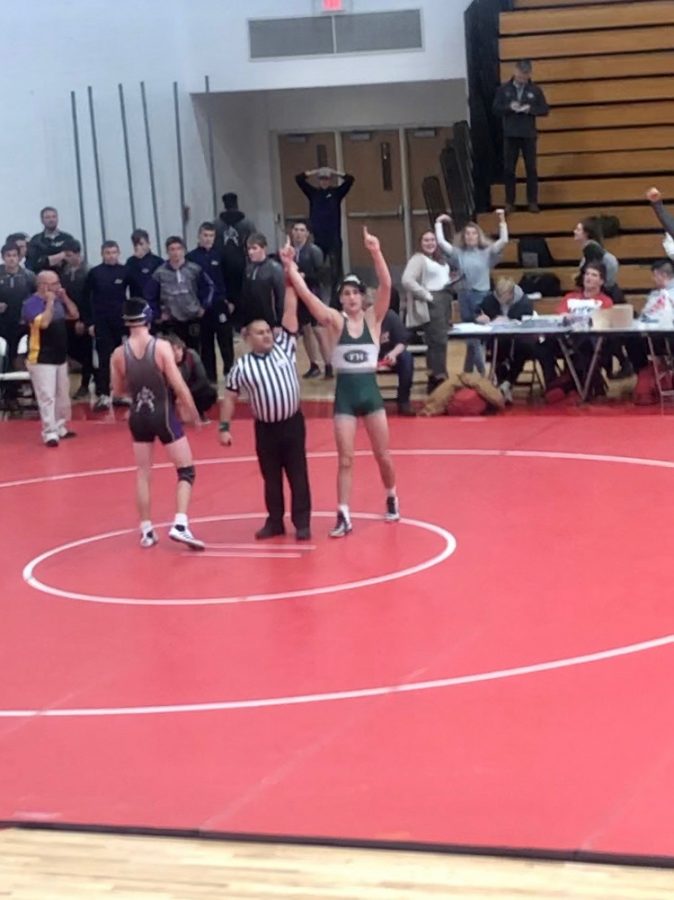 Junior Robby Frazer came in clutch for the Rangers as he pinned his opponent in the final seconds of the match, giving FHC 6 points—just enough for them to come out on top of Caledonia 39-37.

“[Robby’s pin] led to one of the most epic team victories I’ve seen in the last 10 years,” head coach Brad Anderson said. “This match was just a testament to our selflessness, toughness, and discipline over these last few weeks. This was a remarkable night for our program, and I’m very, very proud of our wrestlers.

The Rangers faced up in the OK Crossover at Lowell and matched up against East Kentwood and Caledonia, whom they conquered 48-27 and 39-37, respectively.

Although the Rangers won against EK by a considerable amount, they still had a rather tough time against the Falcons. This match was not only a crucial match but a rather emotional one as well.  Last year, the Rangers were knocked out of districts by the Falcons by 20 points but came back this year and defeated them by 21.

The true test, however, was against Caledonia. The Rangers and Fighting Scots have had a long, quarrel-filled rivalry, which led to a very intense match-up from start to finish.

The battle began with matches from senior leaders Wyatt Englar and Tommy Hendricks, who both gave the Rangers a quick lead. Brothers freshman Blake Jacobs and junior Caden Jacobs also had an unbelievable day as they quickly secured victories for the team. At the heavyweight spot, sophomore Will Richardson defeated his opponent, forcing the Fighting Scots in a tough position that they did not expect going into the match.

The real test came when the Rangers were down 36-27 with two matches to go; two pins would win the match for FHC.

It started out with junior Isaac Gurley, who pinned his opponent in the first period, giving the Rangers a surge of adrenaline along with 6 more points. Robby was up last and needed a pin to win. Not only was all the pressure on him, but the other opponent was getting sent out on the mat with only one thing in mind: don’t get pinned. Robby had other plans.

He got out there, knowing that the team was resting on his shoulders. He started out slow and went down early. He was losing going into the third period 8-7 but saw his chance with just under a minute left. Robby wrapped around his opponent, leaned back, and threw him to his back. After a little over 15 seconds, he fully pinned his adversary and gave the Rangers 7 points, which led to their victory.

“Going into the match, I just kept telling myself that I needed a pin,” Robby said. “I knew I had to put everything out on the mat for the team, and that it was a crucial match to win, so I went out there, wrestled my way, and stayed aggressive and eventually pulled out the pin.”

With these wins, the Rangers move to 8-0 on the season. They will resume competition this Saturday as FHC hosts the Kent County Championships against all 23 teams in the county.