Crandall Quinn is thriving during his first year of high school 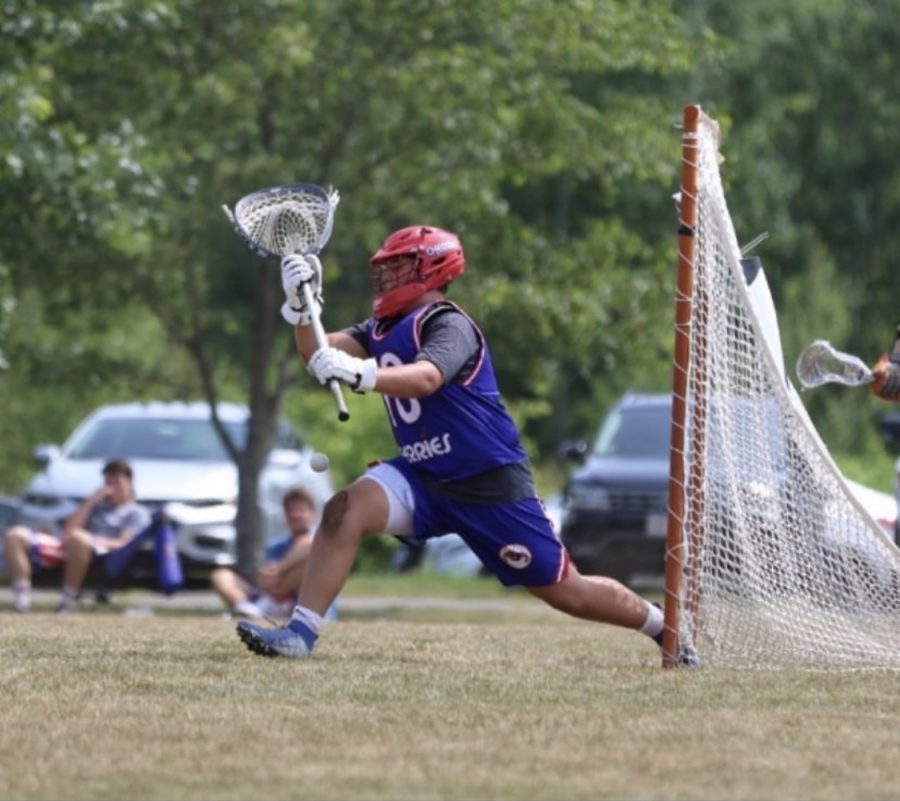 In a year and a half, freshman Crandall Quinn went from a few friends in Traverse city to a whole team of people who have his back.

“I moved from Traverse City West Middle School,” Crandall said. “I came because Traverse City wasn’t really a great fit for me. I felt alone a lot because I really had no true friends. I couldn’t be myself because none of them really had the same thoughts as I did.”

Crandall felt that he had no one to talk to at his old school, but as soon as he moved here, he noticed a drastic difference in the way his social life increased and how nice and accepting everyone was of him being the new kid.

When Crandall moved, he was very welcomed by the students at FHC. He came here already knowing a few friends, and he believes that played a huge role in finding a kind community.

Along with the people he knew before he moved here, he quickly started to gain more friends right away–both due to his outgoing personality and his teammates from lacrosse.

“As soon as I got here, I was really accepted by the school and made lots of new friends quite easily,” Crandall said, “and knowing some people already really helped as well.”

Apart from having questionable friends, school itself came quite easy to him in Traverse City. He said that school there required little to no effort at all, but as soon as he moved here, he could tell the curriculum was different and that he was going to have to work harder if he wanted to maintain his grades.

“One drastic difference that I had to become accustomed to was the school,” Crandall said. “Lets just say, I didn’t have to try at all for my grades in Traverse City. I would have no homework–just really nothing–and as soon as I got here, my grades went from A’s to, well, just not very good. At my old school, I was three grades above in math and in all honors classes, and it really sucks when you realize you’re not special.”

However, he kept his head up, and even though the struggle was defined when he moved here, with time, his grades began to improve immensely.

Along with being a dedicated student, Crandall is also an outstanding athlete in both football and lacrosse, so much so that he was bumped up to varsity for the playoffs.

“To be with all the big varsity players was a huge difference,” Crandall said. “Practices were a lot harder and a lot more taxing on the body, but the games were unbelievable. Even though I didn’t play much, the atmosphere was crazy under the lights; there’s nothing like it.”

Being around all of the upperclassmen gave Crandall a chance to not only have life-altering experiences but also gain connections with all of the older grades. He feels that having those types of people in his life has given him a chance to really reflect on how different everything is since he has moved here.

Moving has been hard, but having good friends, great teammates, and good classes have impacted him for the better.

Some of Crandall’s most enjoyable classes are American Sign Language with Mrs. Anderson and Civics with Mr. Lowe.

“Both of the teachers in those classes are really good,” Crandall said, “and they are both really hard classes, but they keep me engaged which I appreciate a lot, so I think that’s what makes them stand out against some of the other maybe less interesting classes I take.”

He tries to pay attention and become intrigued by what he is learning, so that way the classes seem more fun.

Along with good work ethic and amazing friends, Crandall also has an attitude about life that makes him determined to be the best at whatever he is doing, whether that’s sports, school, or anything in between he will do his best to thrive.

“I really try to keep a mindset that allows me to give my all [to] whatever I may be doing,” Crandall said. “I feel like it’s important to not be afraid to give up what might be good to go for the great, and that’s what I try to hold myself to.”