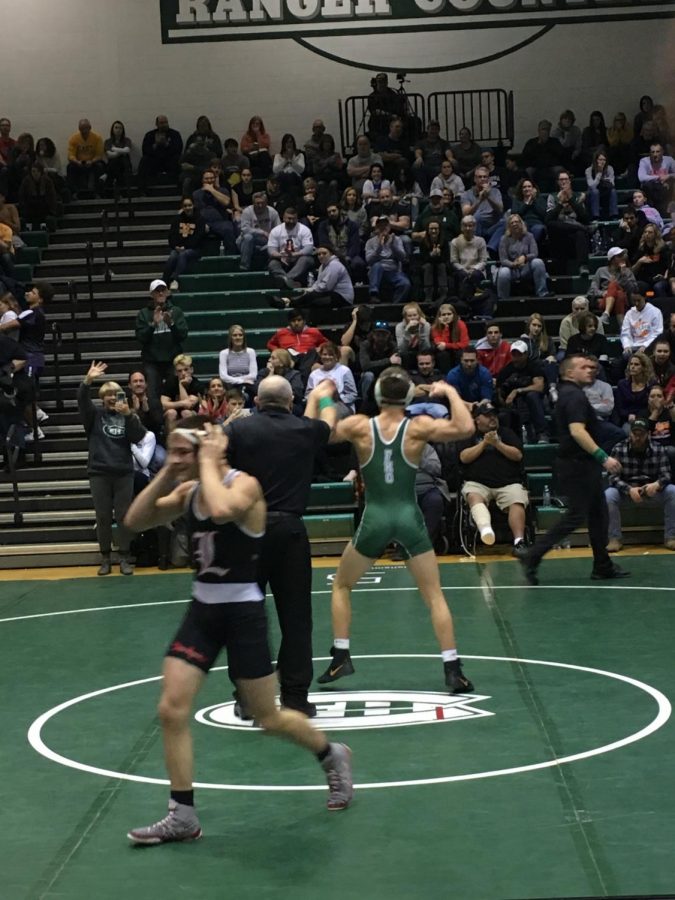 Junior Caden Jacobs went into Saturday’s matches with one thing in mind: to become one of the few Kent County Champs in FHC wrestling history. After a long day, the opportunity finally came. Caden saw his chance and took it, succeeding as the first Ranger since Matt Mills (2016) to place first in the Kent County Classic.

“Today was really special for our wrestlers and staff,” head coach Brad Anderson said. “[The Kent County Classic] is one of the biggest tournaments in West Michigan, and is hosted in our home gym. It takes an entire family and program effort; our guys are put under pressure in front of a big crowd, and we really needed to take advantage of the opportunity.”

The Rangers started out slow with two quick losses to some very tough opponents. Freshman Blake Jacobs wrestled long and hard in his 112 weight class but couldn’t quite capitalize. Blake is a key asset to the team this year, as he will face off against the opponents’ toughest lightweights. Being a freshman, he doesn’t quite have the experience compared to some of the other guys he wrestles, but he showed immense toughness as he wriggled around his opponents all day long.

Junior Mason Childers wrestled at 119 for the Rangers and faced up against some very talented wrestlers throughout the county. In his first match, he was pinned early by a stud from Middleville. Later on in the competition, Mason stunned his opponents with his quick, yet tactical strikes. He has been in the program for a while and is far more experienced compared to a good amount of his adversaries, giving him the upper hand in a multitude of situations.

“This tournament is filled with the best talent in West Michigan,” Mason said. “I wrestled some tough guys from Middleville, who is very talented as a program, but I couldn’t quite come out on top. However, I thought we wrestled well as a team and placed very high in many cases.”

Juniors Cam Roth and Robby Frazer had an eventful day as well. Cam (152) had some very close matches early on, including one against his teammate in senior Wyatt Engler. It was close up till the end, where Wyatt managed to get the upper hand on Cam and ended up winning.   Cam’s final match was against a tough Rockford Ram, who was on top for just about the whole match. Cam ended up losing the match, but narrowly avoided a pin, which would’ve given the opposition more points. Robby (160) wrestled up a weight class, which put him in a tough spot. He ended the day with a loss, but no doubt gained a lot of experience from the position he was put in.

Towards the end of the tournament, the best wrestlers from each weight class were put on the spot in front of the whole crowd, wrestling for placements. This tournament was filled with a variety of competition—including nationally ranked Austin Boone from Lowell—giving the crowd a barrage of exciting matches. One of those was from junior Bryce Hysong, who placed fifth at 135 and went 4-1 on the day. Bryce fought his way out of the consolation bracket and managed to pin his opponent to give himself and his team a higher placement.

Junior Isaac Gurley competed for bronze at 145, but injury defaulted due to a recurring issue with his knee. Isaac was 2-2 on the day against some tough contenders. His first match was against a very explosive kid from East Kentwood who gave Isaac a tough time at the start but was later pinned. In his final match, Isaac wrestled his heart out and put up a close fight, but eventually the knee was too much for him to continue going and it forced a pin.

The most exciting match of the day was from Caden, who had 3 pins en route to the 125-pound title, along with the award of Outstanding Wrestler. His first match was a quick pin in just over 20 seconds, but after that, he faced off against some very tough competition. In this tournament, Caden was ranked #2 in his class, and beat both the #3 wrestler from Caledonia in the semis and a kid from Lowell who upset the #1 seed in the final match, giving him the first-place finish.

“This is one of the best performances I have ever had,” said Caden, who went undefeated on the day. “I went out and pinned the first guy, and then the second guy, and then won 6-0 against the third. By my final opponent, I was so hyped up that I just went in there and did my thing. It was close at first until he made a mistake, and I took advantage and pulled out my third pin of the day.”

The Rangers didn’t end up winning this tournament, but they had some very entertaining matches throughout the day, along with a few placements in the finals. Their next event is at the Mt. Pleasant Invite on Saturday, January 4.

“Any time you get to wrestle in your own gym is special, and the guys really made today special,” Anderson said. “We have had some really solid workouts this week that prepared us for today’s competition, and that really showed in a few of our guys. Now, we have to keep building off this success and work hard every single practice.”