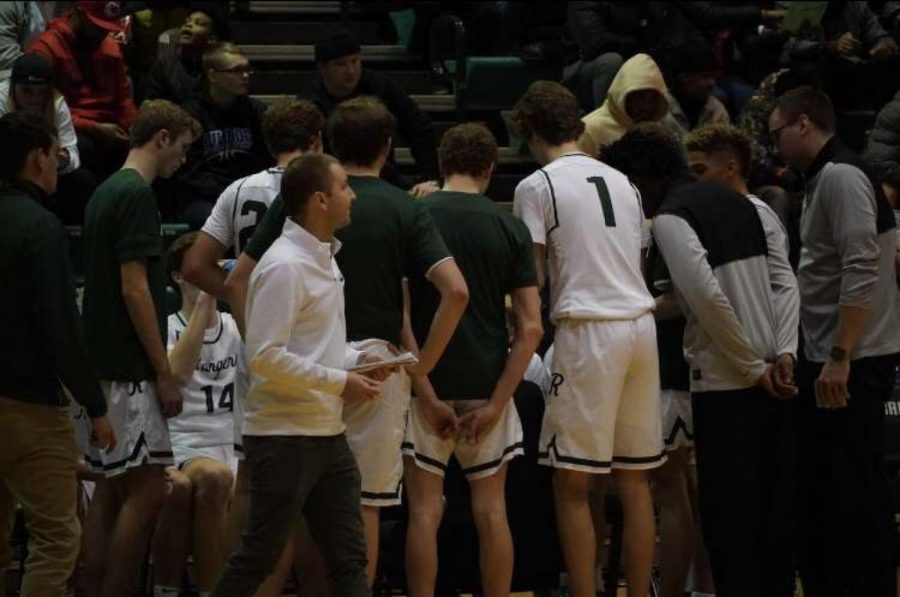 On Friday night, the boys varsity basketball team hosted the East Kentwood Falcons in hopes of earning its first victory of the year in its home opener. The boys were triumphant in the game, coming out of it with a 60-48 victory against a talented East Kentwood team.

Their largest lead of the game—16 points—came during the fourth quarter when they went up by a score of 51-35. After losing on the road 55-53 in overtime against Forest Hills Eastern in their first game, the Rangers played to the best of their ability in this win.

The theme of working hard in practice that has been preached by everyone on the team came to light in this game as the boys knew they had to stay focused all week in order to beat the Falcons.

“I think that all of our guys were prepared, one through 12. Everyone knew it was going to be a difficult test for us, and the guys had a great full week of practice,” head coach Kyle Carhart said. “All of them were locked in both mentally and physically throughout the entire week, and they’re excited that they get to celebrate this tonight.”

Seniors Jimmy Scholler and Mitchell Wilkinson put the most points on the board with 21 and 18, respectively. The team’s shooting was one of the main factors that lead to its win: two-thirds of its shots from inside the three-point arc were made, and the boys converted on 36.4% of their three-point shots.

Other players to score included juniors George Hatchett, Jonah Spates, Jacob Ervin, and Dallas Hopson. George had eight points, with six of them coming off of three-point shots. Jacob had seven, which he scored mostly in the paint, Jonah had four points, and Dallas scored two points.

“It was a great win. We all feel super happy because they are a great team, and I think all week in practice we played super hard,” Jimmy said. “[We] got on each other because we had the tough loss to Eastern and wanted to turn our season around, so it was a great win for us.”

The defense was also stifling, not letting East Kentwood lead during any point of the game, and the Rangers managed to record six steals and a block. Mitchell had the block and a steal, Jimmy had three steals, Jonah had a steal, and junior Peyton Bush had one. Also, 19 of the 24 rebounds the team grabbed during the game came on defense.

“We had all 12 engaged the whole week. It was a great week of practice so it really paid off,” Mitchell said.

This win ends a string of 12 years in a row that the Rangers had not beaten East Kentwood in a game that has taken the shape of a rivalry. This momentum will now carry forward into the boys’ next games, which will be at the Cornerstone Holiday tournament at Cornerstone University on both January 2nd and 4th.

The boys won this tournament last year, so while continuing to focus in practice, it seems very possible that they can repeat as champions.