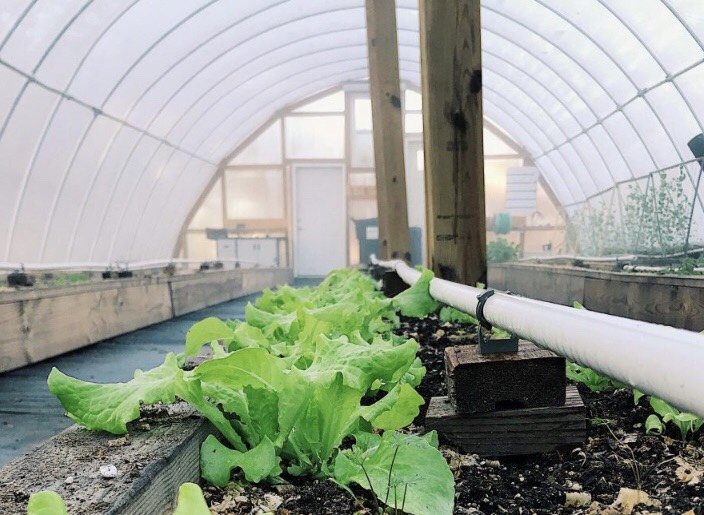 The greenhouse is a positive way to educate students and spark interest, according to science teacher Chad Scholten.

Approximately one year ago, senior Olivia Throop sat amid her peers in AP Environmental Science (APES), learning about ecological processes and interrelationships in the natural world. As a part of these studies, Olivia also learned about the impact humans have on the environment.

In a documentary she watched in class called Food, Inc., Olivia and those around her were informed of the often unseen environmental effects of agriculture, as well as the industrial involvement in the production of food.

After watching the documentary, Olivia claims her viewpoint shifted. She claims that before, she never considered the environmental impacts of her choices.

“I always feel like it’s better to know what’s going on,” Olivia said. “I’d rather be able to know what’s happening. I’d rather know the truth and be uneasy about it than to have ignorance. I feel like most people don’t want to know what their food is doing and where it’s coming from.”

This “truth” that Olivia refers to is, to her knowledge, the effects of the food industry, considering effects on both the environment and people. According to Olivia, AP Environmental Science and Food, Inc. illuminated the external costs and hidden details of food corporations in America that many consumers don’t take into consideration.

These effects include land degradation from farming, the amount of resources needed for raising animals, waste from farming, and the personal moral implications of consuming animals.

“I feel like most people live in an ignorant bliss,” said Olivia, who switched from an omnivore to a vegetarian diet after taking APES. “They try not to think about where their food is coming from. They just think about how it is, and that is how I was before I became a vegetarian. I just didn’t think of the meat as an animal. I thought of them as two separate things.”

Although there are several environmental effects from producing food, science teacher Chad Scholten states that there are two main effects: loss of biodiversity and eutrophication (excessive accumulation of nutrients).

Native plants and animals are frequently destroyed due to a demand for land in order to farm and raise animals. Also, fertilizers used on this land end up in bodies of water as runoff, creating algal blooms (rapid growth of algae), which leads to loss of oxygen in the water and death of marine wildlife.

“I feel kind of embarrassed or ashamed,” Scholten said. “[It’s] kind of like that’s what we’re doing to the planet just for maybe like a hamburger and fries or something like that. I feel bad, but I also feel like this gives me more reason to make conscious and environmentally sound choices when it comes to food.”

Scholten believes people may make non-environmentally friendly choices mainly due to the high costs of local and organic foods, as well as the fact that people often aren’t aware of the impacts of their choices, such as in Olivia’s case before she watched Food, Inc.

Therefore, one of his goals as an educator is to enlighten his students not only on the environmental effects caused by humans, but the power of their individual actions as well. It is generally implied that drastic change can only stem from people with power, i.e., the government, big corporations, and influential businesses.

However, Scolton believes that change can occur at an individual level with personal choices, and the first step is to be informed on these choices and their effects.

“I think that first is to understand where your food comes from,” Scholten said. “I think it’s [important to teach these topics] because in three classes a day I’m going to be reaching about ninety kids. I feel like by educating students and showing them how our food is raised, it brings awareness that their choices make a difference.”

Olivia agrees that informing people on the environmental impacts of food is essential for engendering change to decrease the negative impacts on the earth caused by human actions.

“I think [informing people] is important because of how bad our environment is getting right now,” Olivia said. “I feel like if more people know about the impact that they’re making, then they can realize how to change what they’re doing or to help our environment and help our earth survive for longer.”

Scholten also states that consuming local organic food is another step towards land conservation because it typically uses fewer herbicides and pesticides. He recommends finding food that doesn’t use Roundup, which is a brand of herbicide. Another way to join the movement, he says, is to eat less meat. All of these actions help to sustain the environment and its resources.

“Because we eat all the time,” Scholten said, “this is something that is very easy for students to gravitate towards and feel like they can do something about. So, look for things that would help to support the health of the planet but also the health of the consumers.”

Senior Dani Ahmetovic is particularly concerned about the effects the food industry has on the climate. Although he said it “might be hard” to stop eating meat, Dani states he tries to do what he can to make environmentally positive decisions.

“I feel like since there’s threat of climate change,” Dani said, “if we all just ate fewer dairy products and red meat, we can do our own part by decreasing [carbon] emissions. So that’s something that I think I can work on.”

Junior Julia Beaumont believes that people often get too distracted by the pleasure of eating to consider the environmental impacts; however, she also thinks that the health of the environment is an important factor to take into consideration.

Dani, who is also a member of the school’s environmental club, is trying to make a more significant positive impact on the environment by taking it past individual choices.

He, along with the other members, find the amount of waste correlated with food an issue. Therefore, they are trying to work with the school’s administration to limit food waste and decrease the amount of plastic and single-use materials used for food packaging.

“There’s only so much we can do as teenagers,” Dani said. “But if we can start at our school and try to get people positively influenced by what we want to do, they can spread it to their own homes and then from their homes into other homes. Then, everyone gets connected into a single movement of using less plastic or eating better types of food for the environment.”

As the teacher advisor of the environmental club, Scholten believes that these changes are possible if students work together; however, the most difficult aspect of making these changes is to get students involved.

“I think the hardest thing is to just get people on board,” Scholten said. “A lot of people hear about [the effects], but they may not take the steps to [change]. So they probably nod their heads and say ‘yeah I understand. I see why I can do that.’ But then won’t they take action. That’s always the hardest part. But I think it’s very possible [to make changes in the school].”

Olivia hopes that people will get on board and take steps forward to make change. In her opinion, every person’s actions count because one person’s choices may inspire others, and together, change towards a more sustainable and ecologically stable environment can occur.

“I like to keep hope,” Olivia said. “I feel like if people all worked together and tried to make things better, then we can make big strides to make the earth better.”

Thus, it’s important that people are aware not only of the scientific environmental effects, but are aware of the power of their impact and choices, as well.

“If no one does anything and thinks that their impact isn’t going to help,” Olivia said, “then nothing is ever going to happen. One person makes such a big impact. You can’t just think that you’re not making an impact. It’s better to do what you can than to not do anything at all because you never know how big your impact can be.”