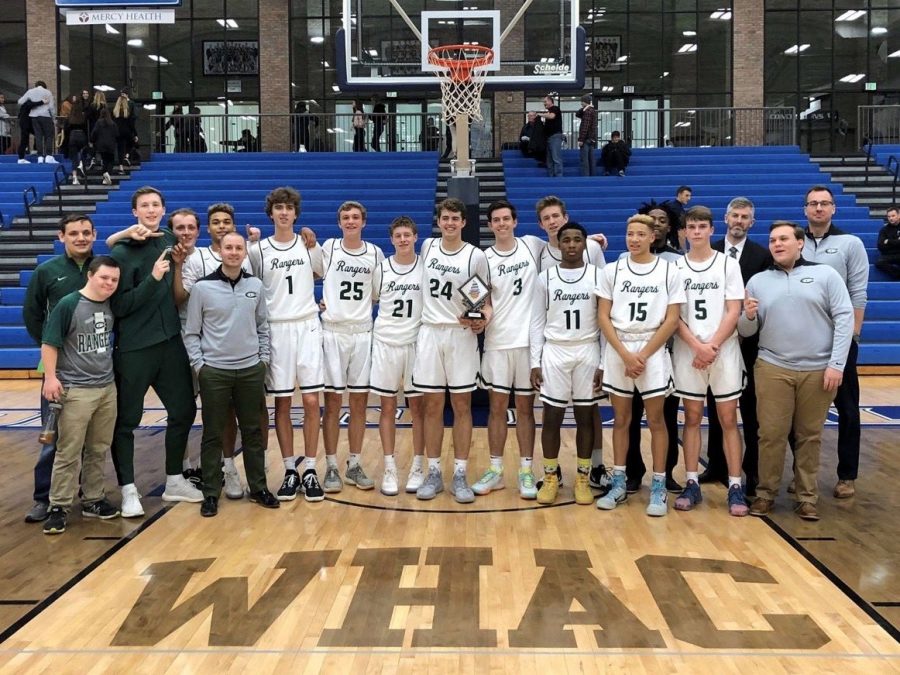 The boys varsity basketball team reclaimed its title as champions of the Cornerstone Holiday Tournament to tip off the new year. In the boys’ first game, they were victorious over Allendale. In the championship game, the Rangers got a revenge win over Forest Hills Eastern after falling to the Hawks in their season opener.

Allendale struck first in this game, but big three-pointers from juniors Dallas Hopson and Chris Battiste early on brought the Rangers back to an even score of 7-7. The two teams took turns swapping leads until late in the second quarter when the Rangers pulled ahead by a score of 12-10; they kept this lead for the remainder of the game. A surge early in the third quarter pushed the boys’ lead from three to 11. The boys won holding the largest lead of the game, 61-46.

After taking down the Allendale Falcons, the team was set up for a rematch against Forest Hills Eastern. The boys had lost to Eastern in their first game of the year by a score of 53-55 in overtime but got their revenge in a 66-34 blowout in the championship game of the tournament.

Jimmy scored as many points individually as Eastern did as a team with 34. Dallas scored 11 points after going 2/2 inside the arc and 2/3 on three-pointers. Dallas and junior Peyton Bush both had three assists, highlighting the offensive efforts from the team. On defense, Jimmy had three steals and two blocks. Peyton and senior Jay Weiner both recorded two steals in the game.

Going on a run midway through the second quarter set the boys up to lead for the rest of the game as they jumped out to a 38-20 lead. The boys obtained their largest lead early in the fourth quarter after a two-pointer by Jimmy to go up by 35 with a score of 64-29. Eastern would bring the lead down by three as the game ended 66-34 in favor of the Rangers.

These two victories mark back-to-back Cornerstone Holiday Tournament championships for the boys varsity team. After ending the tournament with a win against an Eastern team they had lost to earlier in the season, the boys will travel to Greenville for their next game on Friday, January 10th at 7 pm.