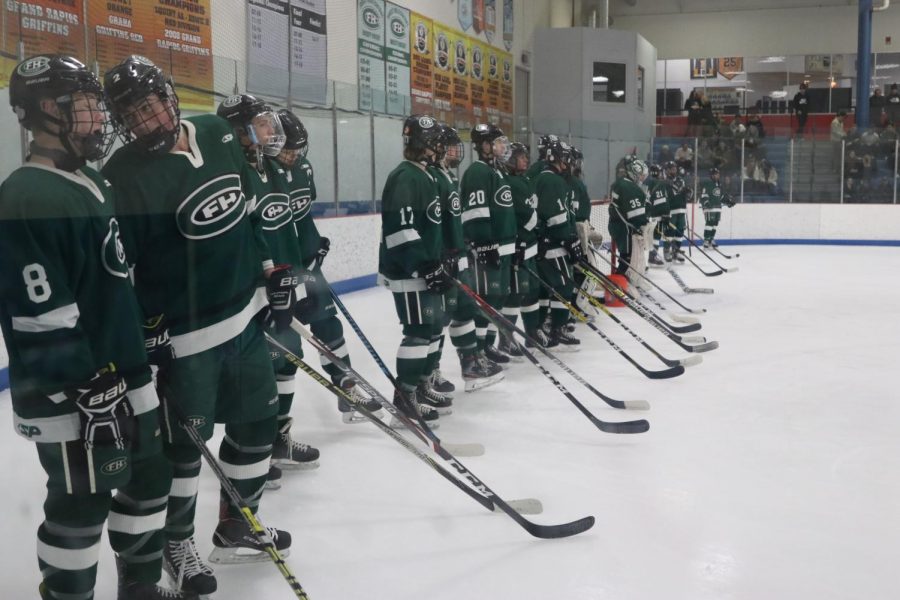 Junior Mason Kelly once again propelled the FHC hockey team to victory this weekend, with his goal calling quits on the game as he scored in sudden-death overtime against Big Rapids to secure a 2-0 weekend for the Rangers and the 4-3 victory.

The day before, however, the Rangers took on Grand Rapids Catholic Central in a game that has been a heated rivalry for years. In a very competitive game, FHC dominated opportunities-wise with 36 shots compared to CC’s 19, but the Cougars did have some very threatening opportunities in their 3-1 loss to FHC.

Sophomore Tyler Weaver opened up the scoring for the Rangers just a two and a half minutes into the game with an unassisted goal, giving FHC some wiggle room as penalties became a bit of an issue down the stretch for both teams. The Rangers failed to capitalize on their own power play opportunities, as Catholic Central suffered seven infractions for 14 penalty minutes, but FHC scored all three goals on even strength.

As the first period came to a close, the Cougars began to up the ante, nearly scoring on a flurry of chances in the final minutes. However, junior Gavin Brady was strong all night, saving 18 of 19 shots throughout the game and closing out the period with a 1-0 lead.

For two power plays in a row, the Rangers went scoreless in the second period. Catholic Central even scored shorthanded, tying up the game at one goal apiece with 5:18 remaining in the period.

Freshman Sammy Mielock brought back the lead for FHC right before the intermission, scoring from outside of the faceoff circle and beating CC’s Ryan McClelland to his right side. Sammy has been an integral part of the team’s offense in just his first year of high school, and his production will need to continue if the Rangers want to see continued success later in the season.

The second period ended 2-1 with FHC leading, and the third and final period was relatively uneventful. With ten minutes to go in the game, senior Hayden Sarjeant found the stick of senior Peter Bardelli on the rap around, who then found fellow senior Cole Beaufait for the well-placed shot from distance.

This goal effectively wrapped up the contest, as the Cougars did not manage many chances after the momentum was completely on FHC’s side. With a final score of 3-1, the Rangers secured a massive rivalry win against a talented team after falling to FHNE the week before.

The very next day, the Rangers traveled up to Big Rapids for another non-conference matchup against the Cardinals of Big Rapids High School. With less than 24 hours between the two contests, sophomore Jake Munger was in charge of the net against Big Rapids. In the 4-3 win in overtime, Jake saved 23 of the Cardinals’ 26 shots.

In the first period, Peter opened up the scoring off assists from Mason and Cole, and this was the only goal of the first 17 minutes. The lead came with a goal on a power play, something the Rangers struggled to do against GRCC.

Every time the Rangers scored, the Cardinals would answer. Big Rapids tied things up seven seconds into the second period, but FHC quickly responded with a goal from senior Cole Munger just a minute and a half later. However, the Cardinals responded yet again with seven minutes left in the period, and the score was tied 2-2 at the end of the second.

Cole Beaufait scored his first goal of the game at a very important time, giving the Rangers the 3-2 lead three and a half minutes into the third period on a shorthanded goal. The Cardinals tied things up once again with nine minutes left in regulation, and there would be no more goals until overtime.

In overtime, Mason secured the game-winning goal off assists from Hayden and Cole Beaufait. With the 4-3 win, the Rangers finished off the weekend 2-0 and generated some much-needed momentum ahead of next weekend.

With these two wins, the boys advance to 9-4 (3-1) on the season. This coming Friday, the Rangers will take on East Grand Rapids for the second time this year, with FHC taking home the first matchup with a 5-3 victory.