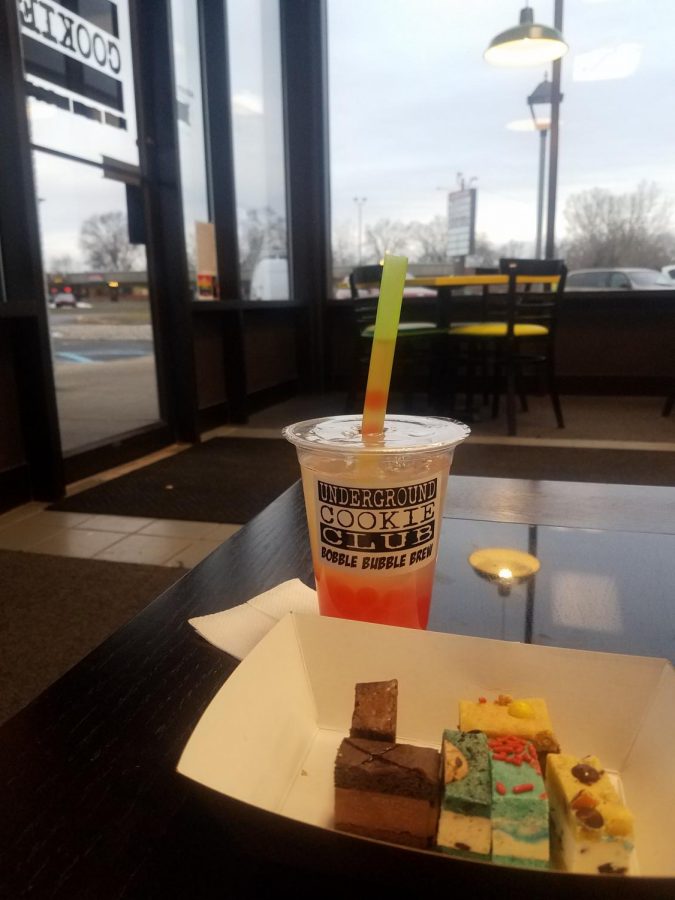 When I first looked up the address for Underground Cookie Club, I debated whether or not the trip would even be worth it. However, the reviews online were fairly positive, so I figured I would give it a chance.

Once I walked in the door, I was hit with the strong scent of cookies baking in the kitchen. I felt myself approaching excitement, but I was soon distracted by the decorations.

The discombobulating setup of the small room quickly confused me. In one corner of the room, the theme was centered around Dr. Seuss. In another corner, though, the walls were covered in movie posters. There were also playing cards glued to tables and Nintendo characters scattered throughout the building.

After analyzing the interesting choice of decor, I was greeted with a kind smile behind the counter. One of the employees made it his priority to make sure I fully understood the menu.

After carefully scanning the menu to decide what I wanted, I quickly chose the mystery box. The mystery box consists of eight different quarters of their ice cream sandwiches, so I figured it would be the best choice to get a good idea of what they had.

The mystery box came in the shape of one of the blocks in Super Mario, which mirrored the decorations throughout the building. The ice cream sandwiches were wrapped up in parchment paper inside the box.

When I unwrapped the sandwiches, they all seemed to stick together. Each quarter of a sandwich that I picked up had small pieces from another quarter resting on the side of it.

However, I did not let my initial judgment get the best of me.

When I tried the first flavor, I was not entirely sure of what to think. It is not that it was bad, it was just not the best thing I have ever tasted. The “cookie” holding the ice cream together looked more like a colorful brownie that was left in the oven too long.

The cookie was hard but not rock hard; it practically had the texture of taffy. The ice cream, though it was held together better than the cookies were, was not even that cold.

The entire ice cream sandwich fell apart in my hands after I took my first bite. The cookies on each end of the ice cream loosened their grip, and the sandwich became three separate pieces.

Even though the first sandwich I tried was not the greatest, I remained optimistic.

It was not until after trying the second flavor that I simply gave up on any chances of being amazed by the food.

The second sandwich I tried was the polar opposite of the first one.

The cookie part of the sandwich was more of a piece of fudge; it was sticky and soft. The ice cream was colder but it was still only average.

Along with the mystery box, I also ordered the bubble tea. The strawberry-limeade flavor tasted like mere lime juice. The bitter drink did not help the already mediocre taste of the ice cream sandwiches.

I tried a couple more flavors of ice cream sandwiches in hopes of finding something good, but I did not succeed.

Underground Cookie Club is not worth the thirty-minute drive. Perhaps, if it were closer, I would consider going there again, but that is not very likely.