Science Olympiad strives for success in their upcoming competitions 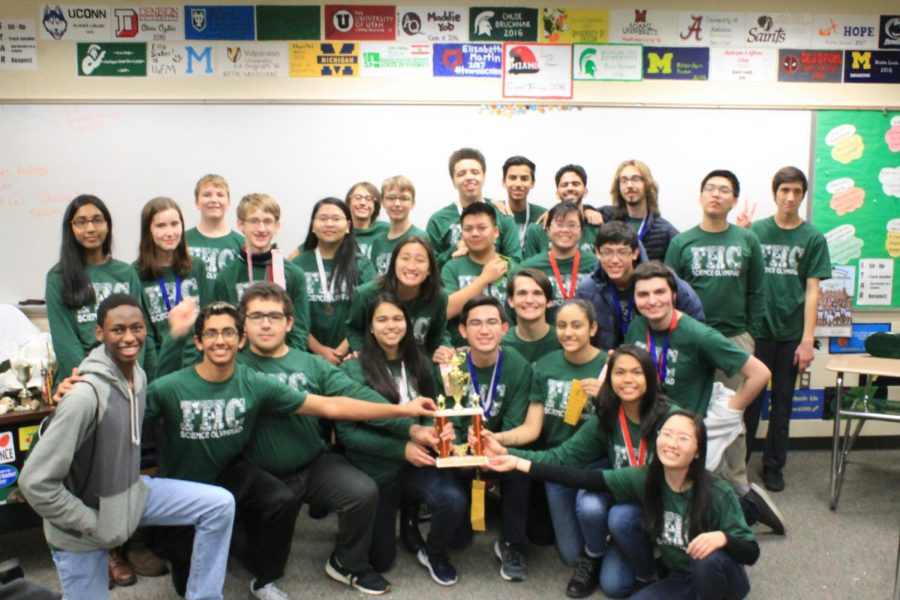 As a member of clubs like GLI (Global Leaders Initiative) and GSA (Gender-Sexuality Alliance), to being a co-leader of PACE (Political and Current Events) and Model United Nations, Tony spreads his time over many extracurriculars but is able to succeed and grow in every one of his passions.

Another club that Tony dedicates his time to is Science Olympiad—a science-focused club that allows its members to explore their interest in science, learn, and be creative.

“Science Olympiad, unlike most clubs, is a competition-based club,” Tony said. “Our club meetings are spent preparing for those competitions. That is different from some of my other clubs [which] are primarily just social clubs for an hour after school.”

This competition-based aspect of Science Olympiad allows science-minded students to express their interests in a unique way. Weeks are spent preparing for the multitude of events, and students are all required to either physically make something or prepare a binder of notes based on one page of guidelines that they will be able to use on a test of the material.

The events include, but are not limited to, Disease Detectives, Protein Modeling, Anatomy & Physiology, Sounds of Music, and Fossils.

The Science Olympiad team’s most recent competition was in Portage, and the team took sixth place overall. Aside from the overall score, there were nineteen other medals earned in individual events. Tony was one of these people who placed in his events on what was a fun, yet long, competition day.

“We arrive at school, typically bright and early,” Tony said. “Often at six-thirty or seven [a.m.]”

The team that competes at the competitions is comprised of fifteen individuals, and for the regular competitions, usually two teams attend representing FHC.

“Most events are two people per event,” Tony said. “We go [to the designated room], take the test, or we build the thing, or test the build. At the end, after [the] six time slots of different events, we then have an awards ceremony that is later in the evening.”

What may seem to be a daunting club, filled with prestigious competition and intelligence, has proved to be popular among students at FHC. Freshman Mrrudhula Perumal has been a part of Science Olympiad for three years now, with this being her first year at the high school.

“I joined Science Olympiad because my older sister, [who] graduated from FHC last year, [did] it and she said [that] it was a really great experience,” Mrrudhula said. “You get to meet new people that you otherwise wouldn’t have known, learn tons of new things, and [receive] college credit.”

The supportive environment that Science Olympiad creates helps with the workload that is present for members of the club. Because of the competitive nature of the club, students are required to dedicate extra time and energy outside of school in the same way that they would another class.

“Work for [Science Olympiad] varies for each event,” Mrrudhula said. “For most of the building events, there is more of a heavier workload because you will have to make prototypes, test them, and constantly be improving your model before competition day. For the note-taking events, which are the ones I’m doing, it’s more of a lighter workload.”

While the note-taking events still require extensive preparation because students are asked to complete a binder of notes, these events are two-people events with a workload that is easily divided.

“It’s much easier if you have your partner [do] about half of it,” Mrrudhula said. “About one to two hours every week will be enough to prepare before the competition day. You will also get guidelines for each event, so you know exactly what you [are expected] to know for the event.”

Last year, the Science Olympiad team placed first at the Portage competition, so there were mixed feelings with the results of the competition this year.

“The team did alright,” Tony said. “[But] not as good as we [had] hoped. The next competition is very, very competitive [because] it features a lot of really, really good schools from the Detroit area and out of state. We are certainly not going for a top-five, but I am hoping that we do place as a team.”

This next competition will be held in February at the University of Michigan campus. Because of the rigor of this competition, the Science Olympiad members will be required to prepare more than they have for their other competitions so as to perform well.

The competition following the one at U of M is in Allendale. The team hopes to place first at this one again this year as a continuation of their first-place win from the past few years.

Following the results of this competition, the Science Olympiad coaches will narrow their team down to a varsity team of fifteen, which will be the team to compete at the regional competition at Grand Valley State University.

Science teacher Kristy Butler is one of the five coaches of the Science Olympiad team, and she is currently in her tenth year with the position.

Butler agrees that in order to be successful at the competitions, extra hours are required to study and prepare. Luckily for members, the mandatory meetings every Thursday after school are designed to help team members be successful.

“After school, students can update us on where they are in their own personal events,” Butler said. “We might share team information [or] talk about our upcoming tournaments. Then, [members] go to work with partners on their individual events. Maybe that’s building something, working on a practice test or making their study materials—it sort of depends on the day.”

“It’s fun,” Butler said. “If you’re interested in building stuff, or just any aspect of science [or] design, it’s a fun time to hone in on your event and compete what you know.”