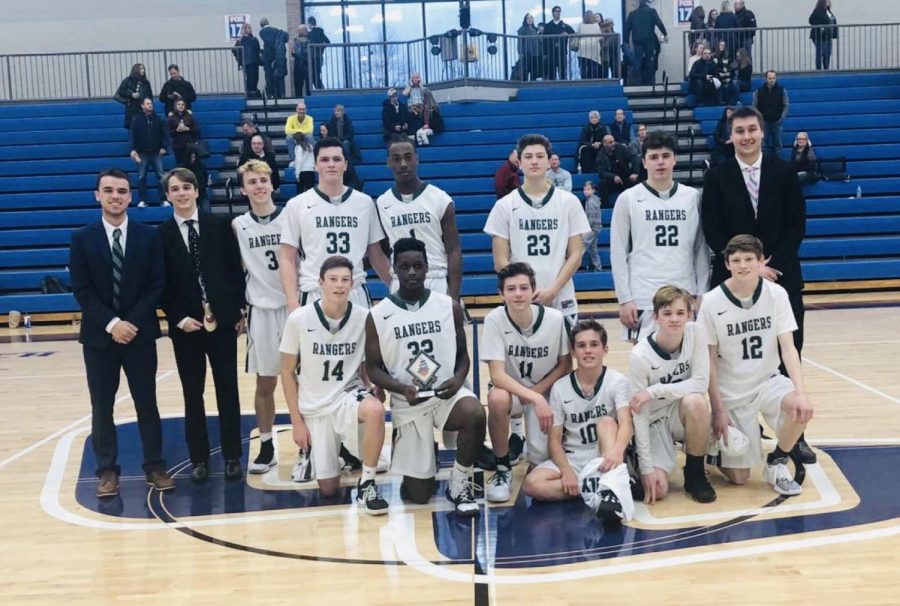 Sophomores Conner Milton and Ben Scholler led the boys JV Basketball team to a strong victory against Lowell. Right out of the gate, Conner won the tip-off and got the boys going. They ended the game with a score of 76-35 against the Red Arrows.

“I thought we simply played really hard. We had guys diving on the ground, getting steals, and running the fast break,” head coach Jordan George said. “Our biggest strength tonight was our transition game. I told the guys that our first instinct should be to push the ball up the floor, and we did that tonight.”

In the first quarter, sophomore Jacob Bonnett started off the game with an easy two from Ben. Then from there, the score kept growing. Conner had a great steal and took it down for a layup on the fast break. Right after, Ben went in strong and was rewarded with an and-one, psyching up the team early.

“I think the most important part of the game is how we started,” Jacob said. “It’s always good to get off to a good start just to get an early lead and have that momentum going forward.”

To begin the second quarter, Ben faked a pass to the side of the hoop but then drove through to get his third and-one of the night. This play really got the bench on their feet and excited. Conner then aided the next few points by getting a rebound and putting it back up, and he then had a great defensive block and pass to Jacob for two. Then, within the next few plays, Jacob took the ball down the court and bounced it off the backboard for Conner to put in.

“Conner no doubt had his best game of the season with his 22 points, and he played great,” sophomore Joe Murdock said. “He was very aggressive and never stopped attacking on the offensive side.”

Sophomore Pierson Van Gorp came in after halftime with a nice three, setting the same dominant tone for the second half. Sophomore Maxime Larmande also had a three along with another one from Conner. The boys were on their shooting game, allowing them to easily pull away from their opponent.

By the end of the third quarter, the boys were winning 66-28.

As the fourth quarter came around, the boys were still prepared to play hard and finish what they had started. Sophomore Matthew Mittlestadt had a quick steal and pass to fellow sophomore Louis Craffey for an easy layup. Matthew then kept working very hard on defense, containing the attacking players and blocking multiple shots and passes. The team finished well defensively, not allowing Lowell to gain many more points.

“Next we play Ottawa Hills, who is 6-2,” George said. “They will play pressure man-to-man defense, so we need to take care of the ball and be aggressive on both ends. We need to have a focused few days of practice leading up to it.”

The Rangers take on Ottawa Hills on Tuesday, January 21st at home at 5:30 PM.