With each new destination, Brian Travis acquires a new lens through which to see the world 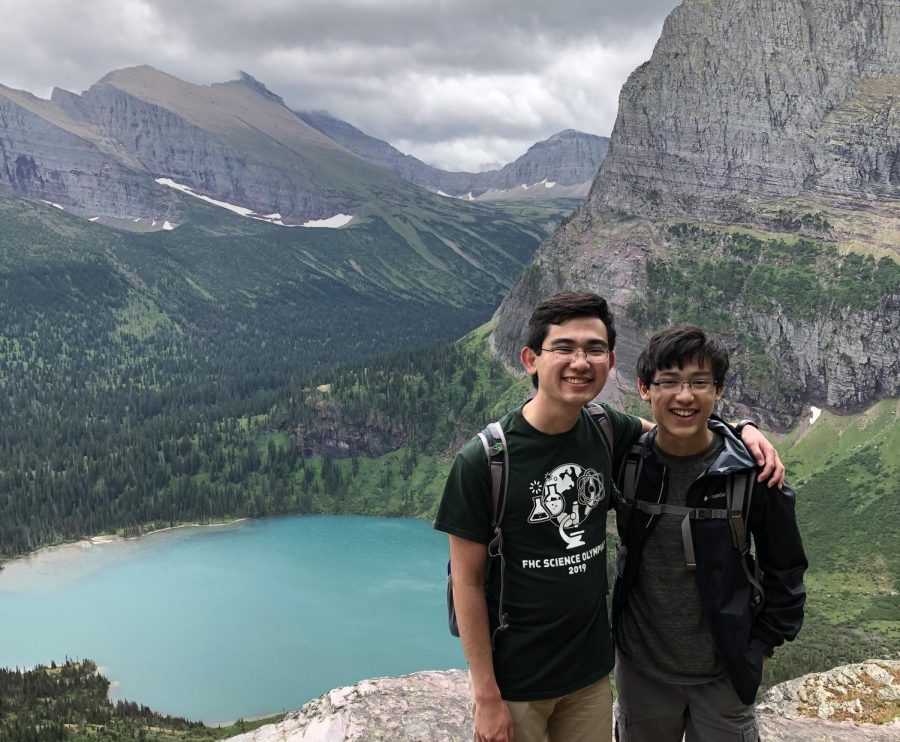 Brian Travis and his brother, Andy Travis, on a mountain hike during one of their family vacations

No matter how many times he’s experienced a uniquely similar experience, sophomore Brian Travis never takes for granted the magic of waking up in a foreign place, witnessing surroundings so different from home.

The mist drifting away, revealing the soaring mountains and glaciers outside the window of the lodge at Glacier National Park. The lake, reflecting the surreal image, compelling him to forego any possible morning bleariness to rush downstairs and take a picture.

Brian has visited over 10 countries and 16 states, and each new experience has imparted new wisdom and new awareness on him.

“If you had to ask me what my favorite vacation [was], I don’t know what I’d say,” Brian said. “I love cruising, but I haven’t been on a cruise for at least five years. And I really like seeing things inside the US, like our national parks before they’re dissolved by our president.”

Brian has grown up traveling around the country and around the world. His own enthusiasm for the hobby is a byproduct of his father’s. For each new experience, his father adds to the collection of scrapbooks that occupy two shelves of space in their basement.

Their vacations are often meticulously planned out, filled with activities designed to give them the most authentic experience possible.

“We do a lot of independent stuff,” Brian said, “because my dad is really into vacationing. Whenever we have a travel agent, my dad does 90% of the work and basically just has to wait for the travel agent to be available. So [he’ll be] like, ‘I want you to do this, this, and this.’ And then sometimes the travel agent is like, ‘no, you can’t do that.’ And then my dad’s like, ‘yes, you can because we can do this,’ and [he] teaches them how to do it.”

But Brian prefers this independent style of vacationing. It creates an experience that is more immersive than most planned tours can give him. He enjoys exploring their destinations in a way that is perfectly melded to fit his family.

“There’s always tour guide companies on international vacations that keep it fairly westernized and familiar for people,” Brian said, “which is fine, but you know you’re not getting the fully traditional and authentic experience when your tour group in China takes you to Mongolian Barbecue.”

Brian has spent his whole life surrounded by the same things and the same people. Visiting different countries pops that bubble so often referred to as “the Forest Hills bubble.”

Through traveling, he has been able to connect to and deeply understand a variety of cultures in ways he wasn’t able to before. Being surrounded by the things he’s only ever read about opens his eyes to the reality of what used to be merely facts on a page.

“[When] you go out, and you see how other people live, it’s less of an, ‘oh, I know in the back of my head from some textbook that they live in houses like this,’” Brian said. “It really changes my opinion of things because you meet the real people, and they’re really just like you. They speak a different language, and maybe they have different views on things because of their culture or their upbringing, but it really helps to actually be there to understand a bit more.”

In some ways, traveling has also brought Brian a little closer to a side of himself he hasn’t explored as much. While he’s content with who he is and is not defined by his heritage, he has been compelled to dig a little deeper into his half-Chinese ancestry.

Until fifth grade, Brian can’t recall having many significant interactions with anybody who was Asian in his class. While he was always aware that he was half-Chinese, he often viewed himself as primarily white. Traveling to China provided him with a type of immersion he’d never experienced or considered much.

“Right here, it’s not extremely diverse,” Brian said, “but in the United States, [it’s] ‘Land of Diversity,’ right? [But], at least in the places I’ve been, when you travel, 99% of the people are from that country. Especially in China, because you go there, and you’re like, ‘oh my gosh, they’re all Asian!’ And then you’re like, ‘you know what, I’m actually average height here.’”

Having his eyes opened to the cultures that extend throughout the world around him has given Brian a greater appreciation of the cultural variety he experiences back home. He has never completely ignored it, but his eyes are more opened to and curious about lifestyles and cultures in his own city.

However, there’s always a bit of shock upon returning home. The unique experiences and sights that fill his time while traveling makes Michigan seem a bit bland at first.

“It’s almost depressing when you land back in Michigan,” Brian said, “and, as you’re landing, looking out the plane window, and it’s just flat forever and you’re like ‘agh.’ When you go so many other places, you’re on the ground and [you] look up to the horizon and there are just mountains, right?”

Even throughout the US, Brian has been shocked at all the variety of landforms and sights that he has laid eyes on. He has been enthralled by the magic of the nation’s national parks, and while particular experiences have seemed dangerous, he sacrifices a bit of safety at times for an experience he won’t forget.

He recalls seeing signs at the bottom of certain hikes reporting the number of deaths that have occurred there. And while most hikes ensure safety for tourists, Brian admits it’s not always the case.

“[They’ll say] it’s six feet across at minimum, or there’s always going to be a chain to hold,” Brian said. “That was not true. There was two-way traffic, but it was on a 30-degree angle [slope] with chains that were either loose, they were gone, or they were eroded into the rock so that you couldn’t hold them. So sometimes it’s really stressful. But it’s just an amazing experience, right?”

Brian has visited locations all over the world, and he hasn’t yet lost the desire to learn and experience more. It doesn’t often matter too much to him exactly where he’s going as long as he knows he’ll gain wisdom and awareness of life on the whole.

The sights are beautiful, and the experiences aren’t easily forgotten. But the things that really impact him back home are the lessons and the new outlook. When Brian thinks about all the places he has yet to visit, the ones that stand out to him are countries that can offer him a perspective he hasn’t viewed the world through.

“[I want to visit] places that [aren’t] similar [to] places [I’ve been],” Brian said, “like Southeast Asia [or] maybe Russia. I feel like since we have different political views as nations or whatever economic stuff, that we’re rivals. It’d just be cool to go in and [see that] there’s just people trying to live a life like us.”