Kevin McPoland exhibits power in crew and creativity in photography 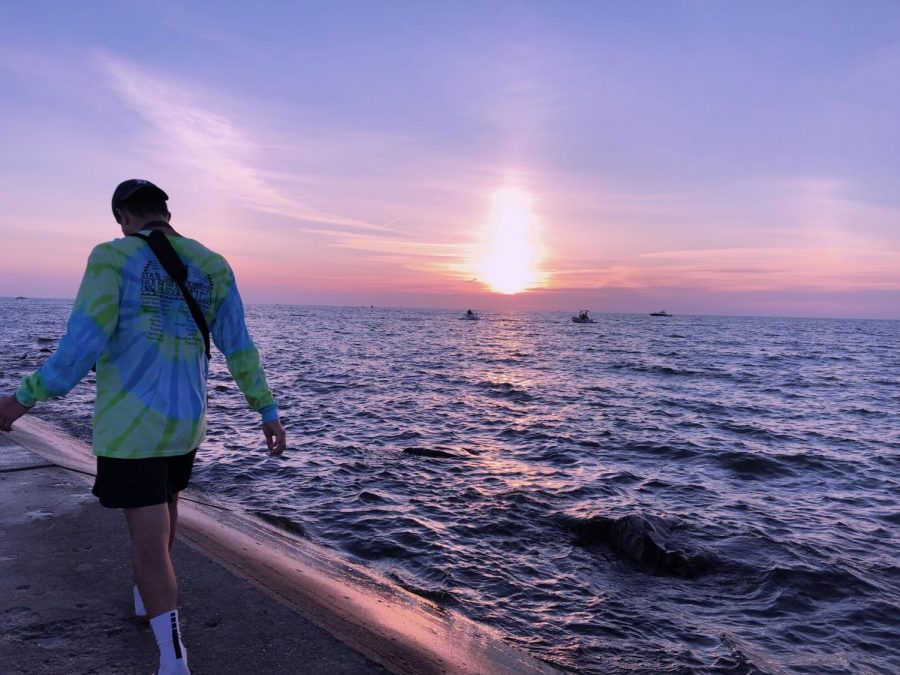 Sinking slowly into firm, soaked sand, sophomore Kevin McPoland steadies and stares through his camera, confident that he’s set up to capture the perfect shot. Decorated under a delicate blue raspberry and strawberry cotton candy sky, Kevin stands and directs his camera to his right to include a distinguished crimson lighthouse in his shot.

“I was probably in seventh grade [when I started photography],” Kevin said. “I had an iPad Mini, and I’d always take trips to the lake and take pictures of Holland and Grand Haven with it.”

Three years later, Kevin’s curiosity has transformed into both an interest and a talent as he continues to capture stunning photos of some of Michigan’s most gorgeous and esteemed lakeline cities and monuments.

“[My favorite thing to photograph] is sunsets in Grand Haven,” Kevin said.

However, sunsets are not the sole thing Kevin has the ability to bring to life within his stunning photographs. He also captures professional-looking pictures of his friends, crewmates, and surroundings. He has even received widespread recognition and arguably fame for the quality of his photography on a prominent social media platform.

“Photography lets me capture photos of the people and things I like most in life,” Kevin said.

Kevin plans to concentrate on photography skills and techniques in order to pursue photography in the future.

“[I see myself taking] senior photos [as a career],” Kevin said. “That would be fun.”

Over the years, Kevin’s photography skills and camera have served as an outlet with which to authentically, artistically, and alluringly capture whatever adventures life graciously gifts him and his friends, family, and crewmates.

“I take my camera everywhere I go,” Kevin said.

That is no hyperbole. Kevin’s camera accompanies him to crew meets even though being in the presence of water obviously threatens the wellbeing of his camera. However, with his sacrifice, Kevin has been able to capture special, memorable moments during regattas and in between races.

Kevin joined crew his freshman year because a peer confided in him that they believed Kevin would be successful in the sport. Now approaching his second season on the crew team, Kevin’s endurance and strength are being tested at winter conditioning for the crew team.

“Conditioning is great,” Kevin said. “It’s Monday through Thursday, and we start on a run, do some body circuits, and erg. [The rowing exercises] are all hard.”

Last season, Kevin received a total of eight medals from participating in regattas. At the States regatta, Kevin was able to accomplish a third-place state title with his novice team; meanwhile, he achieved third place with his varsity boat as well.

“I had the most [medals] on the team,” Kevin said. “[This year my goal is to] get a lot of medals and beat Harry Hill, our team captain, on the erg.”

Kevin was able to interact with students from different schools as well as row on rivers that he never had the opportunity to—such as the Grand River—last spring. But what Kevin appreciates most about his first season on the crew team was the friendships he created with seniors Harry Hill, Benny Kavara, Kendra Wolffis, and Sarah North.

Whether it be with his friends or with his crewmates, Kevin has created undeniable, sturdy bonds with the assistance of photography. Because of his photographs, Kevin and his friends’ best moments are beautifully captured and able to be looked back on forever.