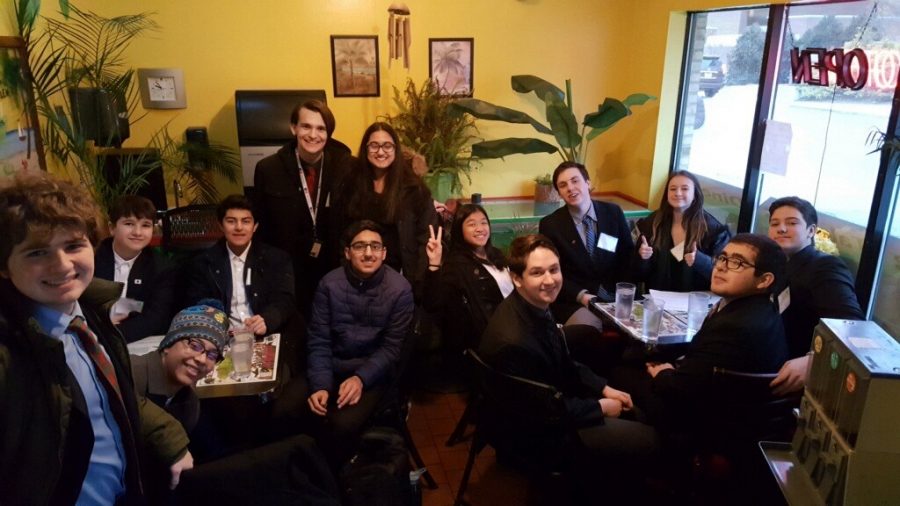 Sitting in a conference room at the University of Michigan, junior Rebecca Dooley slipped into her role of Congresswoman Jennifer Wexton in a simulation of the U.S. House of Representatives. While embodying this position, she faced a puzzling issue.

The chair—a group of students moderating the group’s debate—had announced a crisis that Rebecca and her peers had to attend to: there was a hurricane heading towards South Carolina.

Together, the Democratic and Republican parties had to collaborate in order to construct a solution. Despite the difficulty of working with an opposing side, the group finalized a solution, only for the chair to announce that the hurricane had changed course and never reached land.

This situation occurred at the recent Model United Nations conference, which took place from Jan. 16 to Jan. 19, and it is one example of why Rebecca loves Model UN.

For her, portraying another person and immersing herself into the situation at hand is both educational and exciting.

“I really enjoy the challenge of taking on new positions,” Rebecca said. “There’s a level of disbelief you need to suspend in order to fully immerse yourself into the experience. Essentially, you’re pretending to be another person. If you’re not willing to subscribe to that, it’s not really a fun experience.”

Although she states she didn’t depart too far from her own beliefs during this conference while taking on her role, she has done so in past years, and for Rebecca, participating in the activities illuminates other beliefs that she may have disregarded if it weren’t for Model UN.

“[Model UN] teaches me about other worldviews,” Rebecca said. “It forces me to sit down and consider different viewpoints and try and pass them off as my own. If you’re not there to learn, I don’t know why you’re there.”

During Model UN, students are assigned a country and a committee, and they roleplay specific delegates in a United Nations simulation, such as the situation Rebecca was put in. While presented with real-world issues, students have to work together to create solutions with the policies and perspectives of their assigned countries.

Model UN’s teacher advisor Trevor Riley, who took on the position after Cory Johnson left the district, believes this recent conference at the University of Michigan (MUNUM) was extremely successful.

“I thought MUNUM went great,” Riley said. “Our delegates, our students who went, I thought did awesome. We had so many students who were really invested and involved in the activities going on.”

Although many students succeeded in the fact that they immersed themselves into the activities, two specific students received awards. In each committee, there are three awards given at the end: Honorable Mention, Verbal Commendation, and Best Delegate.

“I was really excited [when I received the award],” said Alex, who represented France in the Security Council committee. “I couldn’t believe it. I tried really hard last year, and I didn’t win anything. I really wasn’t expecting anything this year, so it was really quite a surprise. I was really happy.”

Riley was impressed by both the efforts of the group as a whole and the individual awards that honored the time and energy put into research, studying, and participation. Rebecca also feels content with her performance at the conference, and the recognition that the students received, was not only an individual accomplishment, but was a win for the entire school.

“We had Alex Shier win best delegate,” Rebecca said, “which was a huge win for the team. We had a lot of underclassmen who took part in this particular conference, and they’ve been doing well. They’ve exceeded some of the expectations we had for them, especially those who had never been to a conference before.”

During the weekend on the university’s campus, students were also allowed to leave the conference rooms and explore the area. This is unique to this conference because it allows the students more freedom, and both Rebecca and Alex are in agreement that this aspect makes the trip more enjoyable.

Rebecca especially enjoyed the various restaurants and shops sprinkled throughout the school grounds, as well as the historical architecture of the buildings.

Another unique aspect of this conference is that, similar to the inclusion of recreational time, the discussions while debating also allow for more freedom. In past conferences, the chair scheduled a set outcome for the debate; however, this recent conference drove students to employ creativity and create their own outcomes.

“MUNUM allows students to take more control of the situation,” Alex said. “The chair was more laid-back at this conference and let us take control of our own destiny. It was a lot more exciting.”

However, conferences almost weren’t available for students after Johnson left the district. Without an advisor, Model UN was discontinued as an official club.

But the students, especially with the leadership of senior Tony DiMeglio, negotiated with the administration and recruited Riley in order to be allowed to go to conferences. Without the ambition of students and their desire for this club to stay afloat, it wouldn’t be available at the school.

“I do not take credit for [the success of the club],” Riley said. “In all honesty, it is student driven. The kids who are involved in Model UN have a passion for it, and I’m there to guide and help. But they really do all the work. They know their stuff. They come in ready to participate and be active.”

Tony, who has participated in Model UN since his freshman year, pushed to keep the viable by organizing meetings, helping arrange transportation, gathering student information, recruiting Riley, and helping his peers with research and assignments.

Also, with the help of his efforts and other students, the club is attending two more conferences this year than they have attended in previous years.

Thus, this recent conference illustrates why students want to continue participating in Model UN. Through the awards, involvement, and dedication, their time at the conference demonstrates that many students see Model UN as a beneficial activity in both terms of enjoyment and education.

“[Model UN] is really good for seeing other people’s point of views,” Alex said. “It teaches you the skills of negotiation and compromise and all the stuff that’s really useful in real-world interactions with people.”

Rebecca also agrees with Alex that Model UN has helped to enlighten her on unaccustomed perspectives, and her experience in Model UN is something that she wants to carry with her throughout her life.

“I don’t know if I necessarily want to make [politics] my career,” Rebecca said, “but it’s definitely something I’m interested in having a part of my life for as long as I can because I think it’s important to know the happenings of your state, your country, and how your country affects other parts of the world.”