Avery LeTourneau has grown into who he is through swim 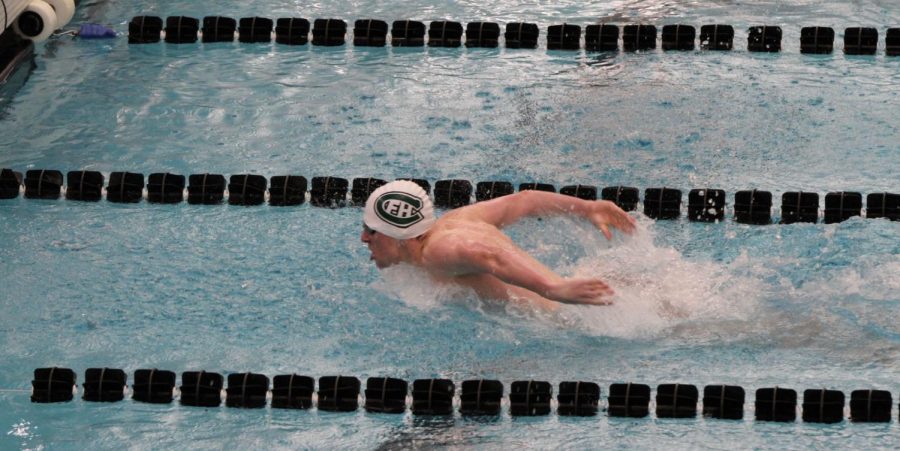 Junior Avery LeTourneau started off swimming in high school with a win—a conference win to be exact. As a freshman, Avery was new to the school’s varsity swim team, yet despite the inexperience, he found himself in the midst of one of FHC’s biggest wins: first in conference.

“It was cool,” Avery said. “I take it for granted a little bit because we were so dominant my freshman year. I went to states [too]. It was to get, you know, the young guys, which was me especially, some experience at the state level. And it was a good time.”

The then Forest Hills United swim team went on to place fourth at states, a win Avery deems impressive as only four guys scored points. Yet, the biggest shock came before states.

Winning at the conference meet during his freshman year, the swim competition that occurs before states, was a rush for everyone on the team—so much so that Avery distinctly remembers wreaking havoc out of joy.

“We infamously broke the bulkhead at Northview after we won,” Avery said. “We all got on it; we all jumped on it and ripped it out of the wall. They were kind of angry at that. This was at conference, and we won it, but that was cool.”

A bulkhead is a moving separator in the water; it resembles, in Avery’s words, a “big thing” across the pool. And with all the excitement over a win, it became a rush for the team.

This feeling of a rush has never left since as Avery continues to place in his meets, whether he’s swimming for the school or his club team called Rays. So far, Avery has won every dual meet—a competition between just two schools—this year except one.

“It’s definitely nice,” said Avery, commenting on his success this season. “It’s a good feeling, especially when you’re winning against other fast people. When you win a close one, that’s probably the best feeling. It’s really special to grind out a win with the guys, and we all get pretty pumped after.”

These wins with “the guys” make it worth it to Avery. Every meet, season, and practice brings the team together and has built a steadfast camaraderie on the team—something that makes the long, grueling days a little easier.

“I wake up, [and] I go to swimming in the morning [around] five o’clock or five-thirty depending on if it’s swimming or lifting,” Avery said. “Then, after school, I have a two-and-a-half-hour practice. That takes up a lot of my time.”

Altogether, swimming consumes over four hours of Avery’s day, and that’s just in hours. At these practices, he swims between 5,000 to 10,000 yards; he even claims “I could swim farther than I could run, too.” And between Rays swimming and the school, Avery is left with under a month each year where he’s not swimming all day as he continuously adds more and more yards under his belt.

Yet despite the rigor of swimming, he has adapted to this schedule over the years as he’s been swimming since he was in elementary school. His swim career—now club and school—all started from swim lessons that even endured an international move.

“From a young Avery age, I was enrolled in swim lessons,” Avery said. “Then, when I moved to Singapore in first and second grade, we had a pool there, so I swam a lot. In the summers when we’d come back, I joined a swim team [called] Orchard Hill—the homies. I think it was either fifth or sixth grade [when] I then decided, ‘Hey, I’m pretty decent at this. Let’s go to Rays.’”

He’s been with Rays ever since and has seen himself grow with swim itself. From simple lessons to his beginning at Orchard Hill, swimming has always been a part of Avery’s life, and he has learned to love it despite obstacles.

“I wouldn’t do it if I didn’t really like it,” Avery said. “It’s probably the most difficult sport just because your face [is] constantly underwater [and] you can’t really talk to anybody while you do it. But the team atmosphere, especially on a high school team, [is] a lot better.”

And by taking his time on his teams “week by week,” Avery’s swimming, without a doubt, has improved. During states for swimming through the school last year, Avery placed eighth in Division 1 with a swim time of only 51:09 seconds for his favorite race: the 100 fly.

Now, after going to long course nationals through Rays twice and placing tenth overall in the 50 fly race, Avery has his eyes set on new goals: winning states and setting a record.

“Hopefully, this year I’ll definitely leave a school legacy,” Avery said. “I’m very close to the school record in the hundred fly. I was 0.09 [seconds] off of it last year twice—so less than a snap of a finger. [It] is kind of frustrating, but at the same time, it’s good because you know you can go that fast.”

In those moments of frustration, Avery relies on support more than anything else, and when asked who is always there for him, his parents were the first to come to mind—whether or not they understand the technicalities of swim—from their years of constant encouragement.

“They’re always rooting for me,” Avery said. “My dad especially is into [swimming, and] my mom [knows] what’s going on since she used to swim. My dad just kind of says anything that comes to his mind about it, and swimming is a very mental thing. You have got to be mentally tough about it. In certain ways, he [helps with that].”

Taking this love and support from his parents with his own, Avery has evolved as a person and a swimmer. With most of his days—past and present—spent in the pool, it has become something much more than a sport.

“[Swimming] is definitely an outlet to go do something that I love to do and do it well,” Avery said. “It’s like a self-confidence booster, [and] it’s nice to see [family] come out and support you; I always try to do it for them.”