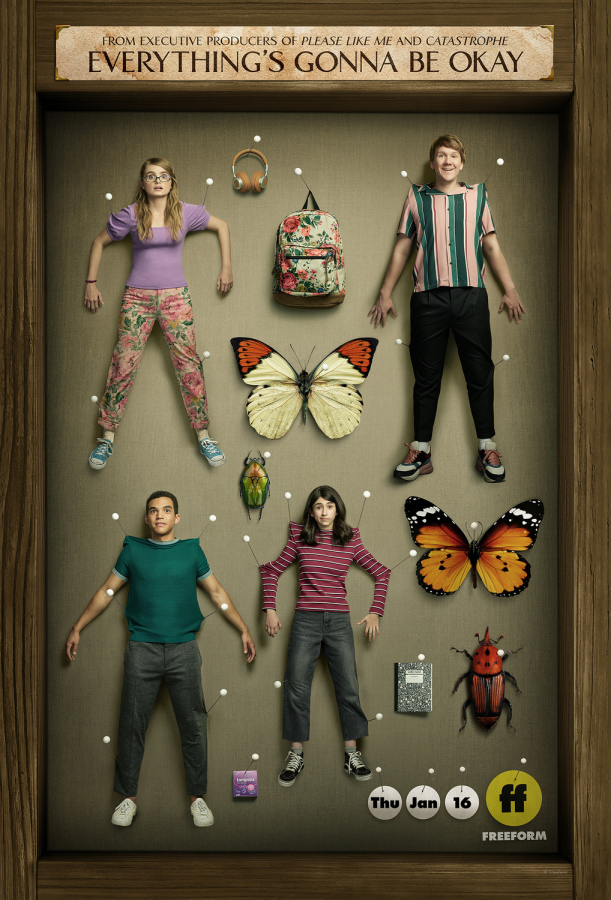 That’s the opening scene for Everything’s Gonna Be Okay.

Within the first few minutes of the episode, you can already begin piecing together Nicholas’ (Josh Thomas) personality. He knows what he wants, he isn’t much of a listener, and he isn’t one to keep many things to himself.

Throughout the first scene, we learn several things about Nicolas. He lives in Australia with his mom, and his dad lives in America with his half-sister that has Autism. He begins to open up even more: spewing personal details that are important to the storyline, but not until later. The openness and willingness to share intimate details helps you process the show’s plot and you are quickly filled in on things that happened before the show took place.

After learning a little background information we get to meet Matilda and Genevieve—played by Kayla Cromer and Maeve Press—and their Dad, Darren who is played by Christopher May. Right away we get to see their personalities. When Nicholas says he is going back to Australia, Matilda’s response is a concise “I know.” Her get-to-the-point attitude is further shown when he then asks if he’ll be missed and her response is “yes.” While Genevieve is more of a secondary character, I can tell from the beginning that she is going to be one of my favorite characters. With her no-care and sarcastic attitude, she brings even more humor to the show.

Nicholas’ sisters are two very opposite people. While Matilda’s character wears the classic blonde hair and cute dress, Genevieve has brunette hair and can be seen sporting darker colors during most of the scenes. Further cementing this point is when Matilda says she cannot love a boy her sister likes and Genevieve’s response is “I don’t have a heart.” She doesn’t care what people think of her and feels the need to keep a stone-cold exterior.

The show did a great job of highlighting the different ways of grieving. Each of the main characters is meant to grieve in different ways and Genevieve’s is trying to lock everyone out.

The subplots help keep the plot fresh and you get to see how each main character is coping separately. Overall, it gave them lots of time to show their strengths and weaknesses which I really cherished because it made it feel like I knew the characters.

The show allows the characters’ personalities to be shown, and it highlights their stories, creating a solid base for the rest of the season.

The out-going nature of all the characters provides several opportunities for humorous and interesting conversations to take place.

Another thing that helped with the humor of the show was the casting.

The show also provides several scenes that cause you to become teary-eyed before rerouting your attention back to the happy parts. When Darren reveals he is dying, Nicholas’ reaction isn’t what I would’ve expected. The situation gets turned around when Nicholas asks why he isn’t the only choice for the girls’ guardian throwing you into yet another storyline.

Overall, Everything’s Gonna Be Okay is an overwhelmingly sweet show and I can’t wait to see what happens next in the seasons to come.