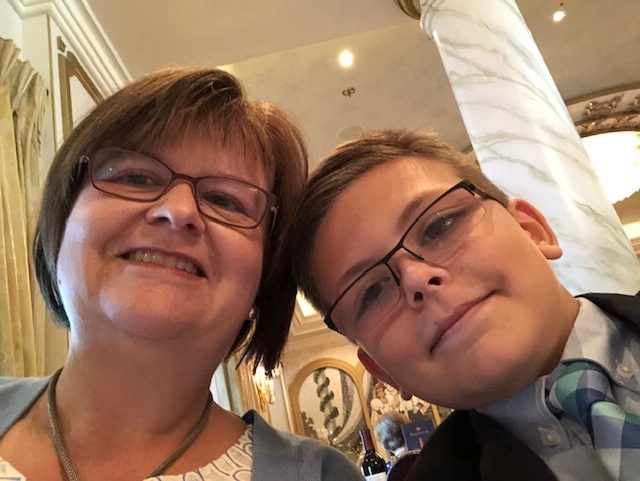 When Van Houten first left college—Kalamazoo College—she taught in northern Michigan for three years. She didn’t find it to be the right fit for her, though.

“Northern Michigan is beautiful,” Van Houten said. “[But] for me, as a twenty-one year old out of college, it was lonely because it was very small. I would always say, ‘I don’t need to go to the mall, but I need to know the mall is there, just in case.’”

Van Houten’s parents wanted her to be happy. They told her to come home, stay with them, and sub for a year.

Ten days before school started, FHC had an opening for a part-time French teacher. Later when the school saw she also had a history background, she was also hired for a part-time history teacher position, too. However, she stuck with French because she believes it is harder to make history fun.

“I give history teachers a lot of credit, to those who can really make history interesting,” Van Houten said. “I also like working with a group of kids who want to be here. It’s much more stimulating than when you’re teaching history and everyone has to be there.”

Van Houten is glad that the spot was open; otherwise, she would not have stuck around for her thirty-two years of teaching at the school.

Over her thirty-five total years of teaching, Van Houten has found a love for the profession.

“I love to teach because, even though it’s the same every day, it’s different every day,” Van Houten said. “I love the interaction with students. I love seeing when a lightbulb goes on and watching their progress. There’s nothing as exciting as having someone come back and say, ‘I heard a French person, I spoke French to them, and they understood me.’”

Not only does Van Houten love that her students are learning and the fact that she is helping them discover everything, she also loves all of the different years of French.

“[Whichever] year I’m teaching at the moment [is my favorite],” Van Houten said. “Truly, every class has something fun about it.”

Her first-year students are new and clueless,  and she loves “to see how they grow.” Second-year French is when the students start to learn more useful French. By their third year, they start to use French during the classes. The fourth year is fun for Van Houten because French history is the focal point of it, and she still loves history. Lastly, AP French is the hardest yet most rewarding; she loves to see when students succeed on their tests.

Van Houten loves all her classes, and she believes that all of the years help people learn more than just a second language.

“People should take French because, just like any other language, French opens you up not only to different words, but different cultures—different ways of looking at the world,” Van Houten said, “which to me is as or more important than the physical language itself.”

Not only is French a good way to learn about different cultures, but also there are so many countries that speak French throughout the world and different organizations that use French as one of their main languages. Van Houten finds it important to be able to be in contact with these people.

Van Houten wants her students to learn about different cultures and languages, but she also wants them to have a good time and feel like part of a French family.

“I do think that teaching makes a difference,” Van Houten said. “Very few of my kids are going to speak French their entire life, but I hope that they remember their time here as a time when they felt cared for, safe, that they were part of a family, part of a group, and that they learned how to care for each other, how to be open to other cultures, how to not judge people based on language, where they come from, and I hope that they go away with a desire to learn more about other peoples and do some traveling.”