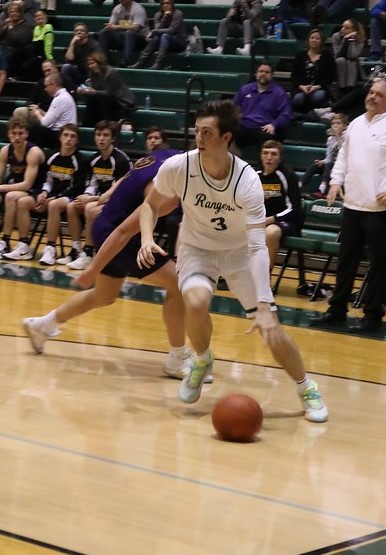 The boys varsity basketball team picked up another conference win on Tuesday thanks to senior Mitchell Wilkinson’s 24 points and senior Jimmy Scholler’s 21 points. This win came by a score of 77-61 over conference opponent Cedar Springs. The boys now remain undefeated in conference play with the season sweep over the Red Hawks.

Mitchell’s 24 points were the most from any Ranger in this victory. He also led the team in rebounds with five—all five coming on defense—and a steal on the defensive end. Jimmy had a double-double in this game, notching ten assists to go along with his 21 points. On defense, Jimmy recorded three steals and a block. Junior Jonah Spates posted a notable performance with eight points, five assists, and a steal, and junior George Hatchett had three assists and a steal.

The Rangers took a 14-7 lead to start the game and wouldn’t trail for the remainder of the game. The first quarter ended in their favor, 23-17. In the second quarter, the team extended its lead to 16 as it outscored Cedar Springs 21-11, bringing the score at halftime to 44-28.

After the second half commenced, neither team really dominated as they traded buckets, and the boys only outscored the Red Hawks by one point in the third quarter to make the score 60-45 as Cedar Springs knocked down a shot right before the buzzer sounded. The fourth quarter started off slow, with only ten points being scored by both teams combined in the first three minutes; however, the scoring ramped up as the game neared its conclusion. The Red Hawks converted on two free throws and a three-pointer with less than two minutes remaining as the Rangers knocked down two two-pointers and two free-throws, and the game ended in a 77-61 Ranger victory.

The boys are now 11-3 overall and hold a first-place position in the OK White with an 8-0 record in conference. They will look to stay undefeated in conference play with their matchup at 3-12 Lowell on Friday, February 14th at 7:00 pm.