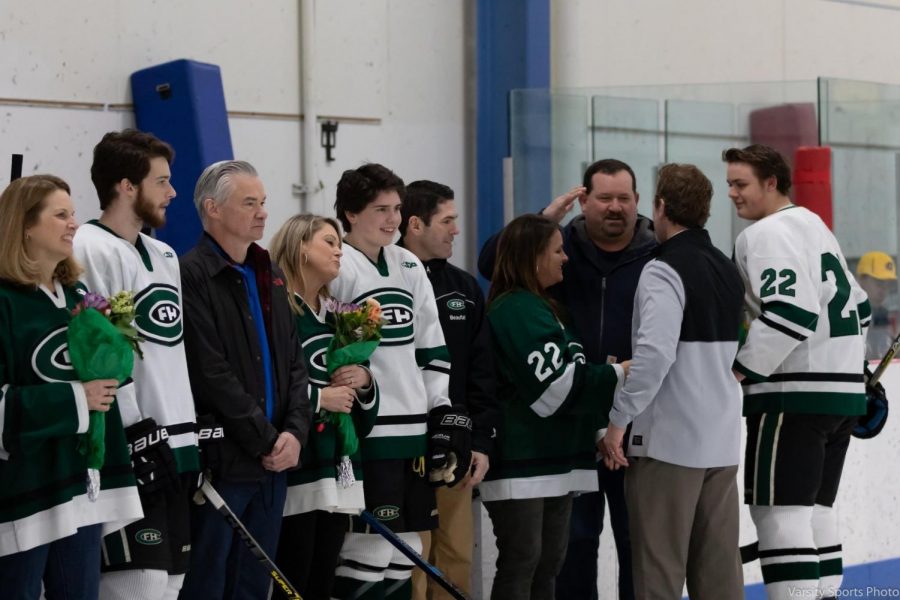 For the second consecutive game, senior Cole Beaufait assisted his teammates three separate times, catapulting him into first place on the team with his 25 assists on the season. There was, however, one more goal scored, and the Rangers sent off the seniors in style with a 4-2 victory on Senior Night against Hudsonville.

From the onset, the Rangers were attacking the net; just 35 seconds into the game, a falling [junior] Mason Kelly neared the Hudsonville net, attempting to fire off a pass to fellow junior Xavier Ott joining in on the attack. The puck hit a crowd of Eagles defensemen with Xavier in the middle, and no one seemed to know where the puck had bounced to except for Mason. Quickly finding it behind the net, Mason wrapped around and squeezed the puck past Hudsonville’s Derek Scholten in between the pipes.

Quickly following, the Eagles fired right back. Less than a minute after Mason’s goal, Hudsonville’s Brendan Schaltz evened things up off a Ranger turnover deep in the defensive zone. Luckily for the Rangers, Mason took no time in his response yet again, scoring via an assist from Cole to give the Rangers a 2-1 lead with 13 minutes to go in the first period.

From there, the goal-scoring slowed down, but the action on net did not. Just under ten minutes after the Rangers regained their lead, senior Ryan Jeffreys scored his lone goal of the game to further extend the advantage, once again assisted by Cole. FHC went into the locker room leading 3-1 after one period of play, and the boys forced 18 saves on 21 shots from the Eagles’ goaltender.

However, the first goal of the period didn’t come until there were only six minutes remaining. Senior Peter Bardelli scored to practically secure the win, but the Eagles responded with a goal just minutes later to make things interesting.

In the third period of play, the tides turned, but the Ranger defense showed its value. Despite Hudsonville doubling its shot total, the defense remained potent, not allowing a change in the most important stat: goals scored. Junior Gavin Brady made 31 saves on the night, with 18 of them coming in the final 17 minutes.

With a final score of 4-2, the Rangers have now won 19 of their last 20 games. Reaching the top fifteen of multiple statewide polls of the best teams in the state, FHC will look to continue to improve with a matchup against Rockford this coming Friday. From there, the boys will take a week off from game action before taking on the winner of Jackson Lumen Christi (21-3) and East Grand Rapids (11-11-1) in the Regional semifinal.