Pinktail Poke doesn’t add much to the Downtown Market 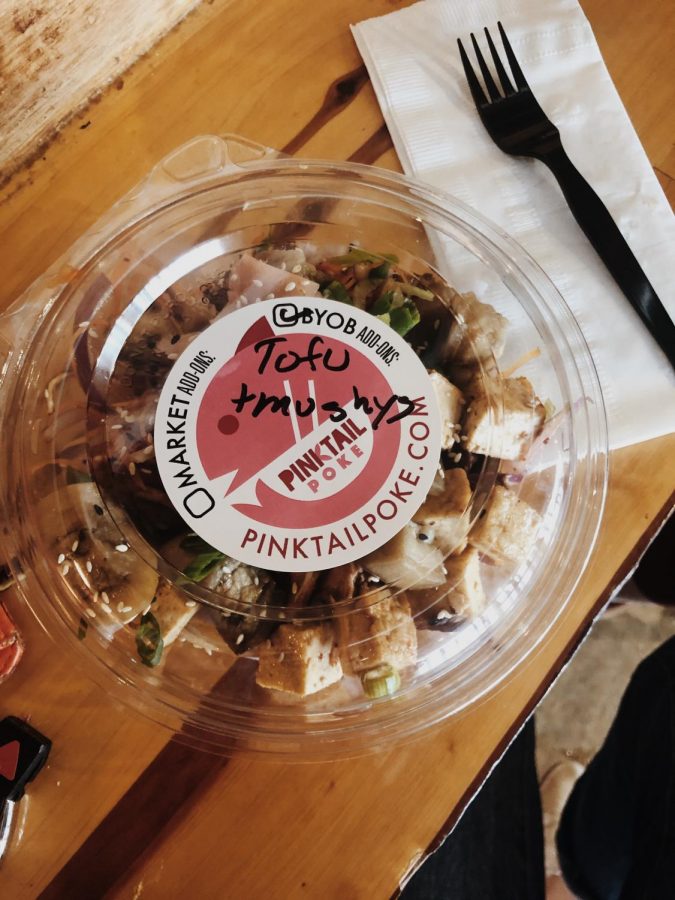 Beginning with Wikiwiki and most recently Poke Toki, I’ve eaten a few too many bowls this year; from customized ones to pre-made styles, I’ve definitely tasted my fair share of flavors. In fact, this endless food obsession has lasted me over a year now.

It’s not just my obsession either. To put it simply, my mother, my friends, and my family all love poke bowls. So we were definitely intrigued to hear the news that yet another restaurant was coming to Grand Rapids just to serve my constant craving.

With just a simple text from my mother stating that Pinktail Poke was coming to the Downtown Market, I had a plan for Valentine’s day.

Lame? A little. But exciting? Very.

My friend Bre, who also accompanied me to Poke Toki, and I hopped into her car—we just seem to have an intricate infatuation with exploring food—and made the always-thrilling trip down I-96. She took the wheel, graciously as always, for I am not allowed to drive on the highway (thanks, Mom), and from the school, it only took around fourteen minutes.

Fourteen minutes, in my book at least, isn’t too long. For places like Char, it’s a little further, so I welcomed the shorter distance as we headed toward the Downtown Market.

Once inside, there was no sign of a new restaurant. This worried me; I could’ve been at a Taco Bell if this restaurant wasn’t open yet. So, I was mentally preparing to break the news to Bre that she had just driven downtown for no reason—that she had wasted her gas and time—when we finally found Pinktail Poke.

The small store, no fancy signs up yet, sat across from the Mexican food stall at the market, and to the unknowing customer, you wouldn’t be able to tell it was Pinktail’s first day.

This made me a little apprehensive as I approached the stall. They weren’t proud or enthusiastic. It was just three people behind the “bar,” and two were at the end, talking on a phone. It was all just off.

Frankly, the vibes were bad.

And when the vibes are bad, I’m awkward, so I blundered toward what I assumed was the ordering station and had Bre read me the menu (I forgot my glasses). Much like Poke Toki, Pinktail has pre-made bowls and the option to build your own, yet as I don’t eat meat, none of the designed bowls suited my needs besides their sole tofu bowl, so I gave into my bossy side and prepped myself mentally to start my order.

The young guy who took my order explained the basics. He listed off the steps to designing your own bowl, yet when I asked for recommendations, he seemed just as new to it as I am. Granted, it was the first day, but that’s something I’ve always loved about my past restaurant experiences; I’ve never had the person helping me steer me wrong upon my first arrival.

Yet, somehow, I went very, very wrong at Pinktail.

My bowl—I regretfully ordered a large—had a base of forbidden rice. The rice was purple, which was the main reason I chose it. Lilac happens to be one of my favorite colors, so I caved. On top of that, I nervously added random bits and pieces. None of the ingredients offered by Pinktail seemed as cohesive or authentic as the ingredients at other poke bowl places I had been, so I hopelessly added what I thought would be flavorful.

I added mushroom, green onions, soy sauce, tofu, and some other bits all while obviously second-guessing myself.

Honestly, I was a disaster, and the ordering process was too. I had lost all my excitement; for its first day, Pinktail just appeared insipid and unenthused like a kid returning to school, and I fed into that mood.

By the time I finished customizing my food, I had lost my appetite, and the price stunned me. My bowl came to around thirteen dollars, and with my tip, I paid over fifteen dollars for food I didn’t even want. So essentially, I started off my experience with a grudge.

It’s hard to explain that grudge. Just after having been to many other poke bowls full of knowledgeable workers and credible food combinations, Pinktail seemed like a fake to me. It was a wolf in sheep’s clothing—a shop chasing the trend of poke bowls without proper research.

And that theory I developed—the reason why Bre didn’t even order from them—was only further argued by my subconscious when I started eating my bowl.

The ingredients were indeed fresh; the ginger I added was snappy with the typical brand of sass it punches. Yet the rice was quite frankly weird. It was clumpy, cold, and oddly sticky. Then, the onions I had looked forward to were limp—the same reason I once had a customer send back her food when I was waitressing.

Yet beyond those downsides, the bowl was just simply flavorless. There was no spunk. There was no typical tropical feeling that comes along with eating one.

There was no adventure, and when I’m paying fifteen dollars, I want something worth something.

And maybe it’s on me. I customized my own bowl, so most of the mishaps were my own; I inherently designed a bad bowl I guess. Yet, an informed staff can make all the difference, and Pinktail lacked just that.

It just wasn’t cohesive from start to finish, and for that reason, I’ll be going to the Mexican restaurant the next time I’m in the Downtown Market.