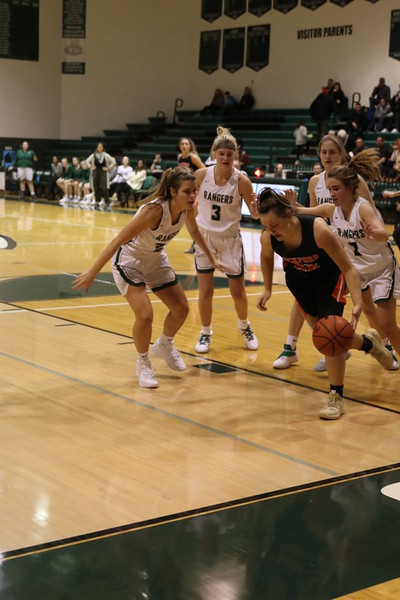 The Ranger defense’s outstanding performance led the girls varsity basketball team to a 43-28 victory of Lowell for the team’s fourth straight win. Sophomore Theryn Hallock was not only a presence on offense with 14 points, but on defense as well, getting many steals and turning the Red Arrows over. Junior Katy Majick also added 9 points to the score, as she continues to shoot the ball at a high level. The Ranger defense displayed a phenomenal performance Friday night, giving up the third least amount of points FHC has given up all season.

The first half was a strong start for FHC, as the team began the game on a 9-2 run. Juniors Katy Majick and Brittney Probst knocked down some big shots to get out to an early lead. Lowell played a box and 1 defense to start out the game, face guarding Theryn and hopeful to limit her catches. However, Theryn was still able to slice through the Red Arrow defense and get some baskets to go.

This win puts FHC at 12-5 on the season and 8-1 in league play, which places them second in the OK White. This week is one of the most important weeks for the Rangers, as they now have 3 conference games remaining in the season before moving on and competing for a district championship.

Next up for FHC will be the Ottawa Hills Bengals this Tuesday. The Rangers dominated Ottawa Hills last time around 75-42, thanks to a career-high 43 points from Theryn. To win this game, the Rangers will need to come out strong from the start in order to put a hungry Bengal squad away early on.